The Federal Reserve just went through its annual ritual of disclosing its preliminary results for the year: The income it earned less its operating expenses, according to central bank accounting, and how much of these earnings it is remitting, as it does every year, to the US Treasury Department. But this statement includes another nugget.

In 2016, the Fed paid our favorite banks $12 billion in interest on their “excess reserves” held at the 12 regional Federal Reserve Banks (the New York Fed, the Boston Fed, the Dallas Fed, the San Francisco Fed, etc.). But wait… who’s actually paying that $12 billion?

Is it just a well-earned freebie for the banks, conjured up out of nothing, in Fed-style? Nope. The taxpayer paid the $12 billion to the banks. Here’s how.

The Fed earns interest income from the $2.46 trillion in Treasury securities and from the $1.74 trillion in Agency mortgage-backed securities on its balance sheet. These are the securities the Fed bought from its Primary Dealers with money that it had created under the QE program. So now, it’s collecting the coupons. This is its income.

After subtracting its operating expenses ($709 million in 2016) and the interest it pays to the banks for their “excess reserves,” it remits the remainder to the Treasury Department. This is revenue for the US government, which can use every dime it gets.

According to the Federal Reserve Board’s preliminary estimates of its 2016 results, it will pay the Treasury Department $92 billion. That’s down from $97.7 billion it paid the Treasury in 2015. 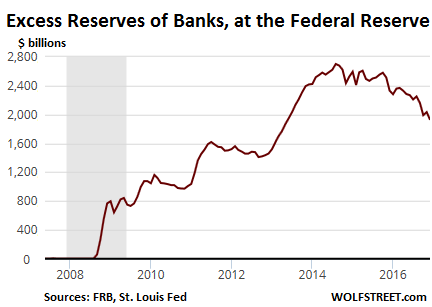 The Fed says that it pays the banks for these excess reserves as a mechanism to get banks to raise their own lending rates when lending to each other, which, in theory, would contribute to raising market rates.

Some folks in the cheap seats might snicker that this is just a pretext, that surely if the Fed really wanted to raise market rates, it could find other means, such as selling down the assets on its balance sheet.

But here’s how the taxpayers end up paying that $12 billion to the banks. The Fed deducts that $12 billion from the amount it pays the Treasury. So the US government gets $12 billion less in revenues, a hole that all US taxpayers have to deal with forevermore. And the 2017 hole, which might even be larger, would add to it.

Don’t worry, the banks are happy. They include that income from the Fed in their earnings reports. And you can just buy their stocks to try to get your money back.

But not all may be well with those banks. They appear to have formed a circular firing squad. Read…  What’s Going on with the Banks? Citi Cuts Goldman to “Sell,” after Goldman Cut Citi to “Neutral”