The People’s Bank of China announced on Wednesday that it is probing the major bitcoin exchanges in Beijing and Shanghai – BTCC, Huobi, and OKCoin – for a list of violations, including market manipulation, money laundering, and unauthorized financing.

This is part of the PBOC’s efforts to crack down on capital flight, a major escalation from last week, when Chinese officials warned investors – if you can call them “investors” – to be careful with bitcoin. That warning came at the peak of the spike and tipped the whole thing over.

Ironically, China’s many other crackdowns on capital flight have pushed the hapless Chinese, who want their capital to flee, into bitcoin. It was seen as a way of converting their yuan into something other than yuan, which they fear will depreciate relentlessly.

The yuan lost 6.5% against the dollar last year, its worst year since 1994, which is nothing compared to some other major currencies, such as the British pound which lost 16.3% against the dollar, and the Mexican peso which lost 17%. But the Chinese are not used to getting whacked by a depreciating currency. It spooks them.

So the promise of convenient capital flight along with the lure of bitcoin’s semi-anonymity and the hope of quickly doubling their money have just been too much to resist. The rest of the world lost interest in bitcoin after it transferred a lot of money to those that got in early and got out in time from the latecomers that ended up holding the bag when it began to crash in late 2013. It went from over $1,100 to a range of around $250 in 2015. But recently, the Chinese have picked up the baton and in an insane frenzy drove it to $1,140 all over again. 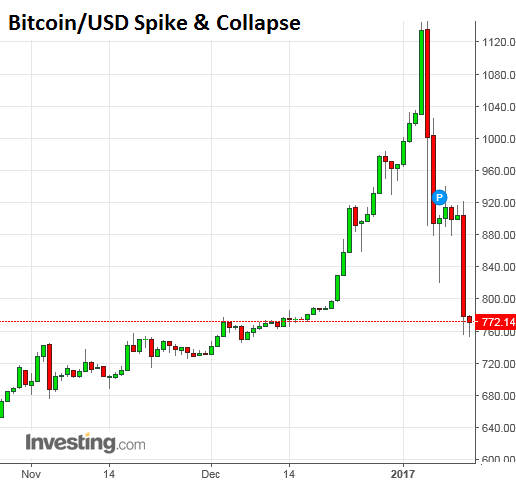 In terms of yuan, it’s even worse: It plummeted 19% against the yuan on Wednesday and 41% over those five misbegotten days!

Trading between the yuan and bitcoin accounted for about 98% of the total market over the past six months, Charles Hayter, CEO of digital currency analytics firm Cryptocompare, told Reuters.

And so the Chinese authorities have trotted out their big stick. Reuters:

The PBOC in Beijing, where officers visited the offices of OKCoin and Huobi on Wednesday, said in a statement that “spot checks were focused on how the exchanges implement policies including forex management and anti-money laundering”.

Separately in Shanghai, the PBOC said it visited BTCC, noting its checks “focused on whether the firm was operating out of its business scope, whether it was launching unauthorized financing, payment, forex business or other related businesses, whether it was involved in market manipulation, anti-money laundering or (carried) fund security risks.”

Hayter of Cryptocompare put it this way: “This is a ratcheting up of the rhetoric from the Chinese authorities – instead of ‘we’re watching’ you, it’s now ‘we’re investigating’ you.”

No one is going to bail out these folks that got in late and are losing a ton of money on their bitcoin bets, or those that tried to catch that knife and got their fingers sliced off. On the contrary. Learn your lesson – that’s what Chinese authorities seem to say with an inscrutable smile on their collective face, same as central banks elsewhere in 2014 as bitcoin jockeys in the US and other countries were losing their shirts.

This episode shows once again that bitcoin, with price fluctuations of 10% or even 20% in a single day, up or down, is not a practical currency that is usable for legitimate commerce, nor will it ever be, despite the hype that one surrounded it.

Sure, just to make a point, there were some legitimate commercial transactions a few years ago that were touted endlessly in the press. But that has since stopped. With these kinds of price variations, forget it. Bitcoin is just an online gambling and wealth-transfer mechanism. And for the Chinese, it has a special additional role: to get their money out of the yuan. But this role too has now been obviated by events, and for many folks, “capital flight” has taken on a bitterly ironic meaning.

The circuitous hidden wonders of “excess reserves” on the Fed’s books have consequences for the US taxpayer. Read…  Fed Pays Banks $12 Billion on “Excess Reserves,” Taken from Taxpayer Pockets