Will we see a “monetary shock?”

On Friday, the three-month Treasury yield closed at 1.78%, the highest since August 19, 2008. When yields rise, by definition bond prices fall: 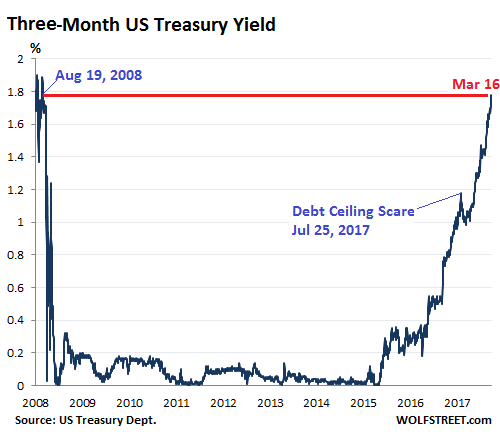 In this rate-hike cycle, the Fed has engaged in policy action only at meetings that are followed by a press conference. There are four of these press-conference meetings per year. The next two are this week and June.

If, in this cycle, the Fed hike rates at an FOMC meeting that is not followed by a press conference – there are also four of them this year – it would be considered a “monetary shock” that the Fed decided to administer to the markets. It would be like a rate hike of 50 basis points instead of the expected 25 basis points. There would be a hue and cry in the markets around the world. But I think the Fed isn’t ready to spring that on the markets just yet. Maybe later. 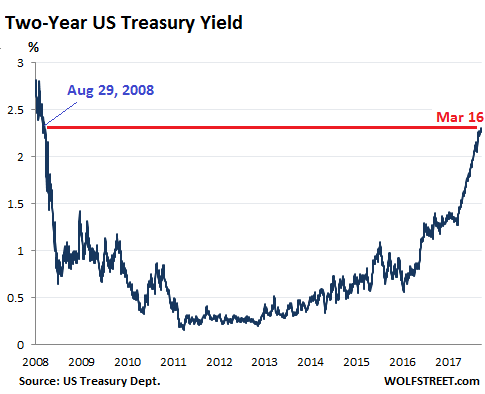 In past rate hike cycles, the two-year yield reacted faster to rate-hike expectations than the 10-year yield. This is happening now as well. The 10-year yield has its own dynamics that are not in lockstep with the Fed’s rate-hike scenario. On Friday, the 10-year yield closed at 2.85%, within the same range where it had been since late February, tantalizingly close to 3%: 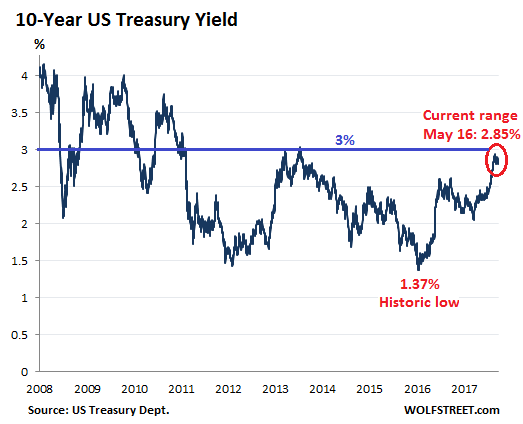 Back on February 13, as the 10-year Treasury yield was surging and threatened to take out the 3% level, I postulated that it would have a hard time doing so over the near term, for two reasons:

One, in the 3%-range – given current asset prices, dividend yields, etc. – the 10-year Treasury is appealing to more buyers, and this will keep bond prices from falling further, thus putting a lid on the yield.

Two, speculators were heavily betting against the 10-year Treasury. By mid-February, bearish bets had risen to about 960,000 contracts, an all-time record. On February 21, the 10-year yield reached 2.95%. Everyone was on the same side of the boat. And there would have to be a sharp snap-back rally that could turn into a short-squeeze.

So we have seen some of both, and the 10-year yield remains stuck until further notice. 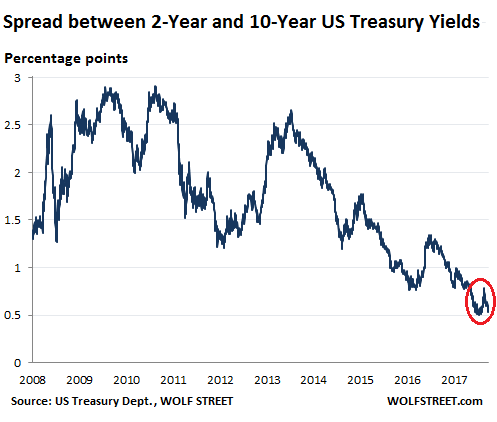 Where does this leave the yield curve?

The chart below shows the “yield curves” as the yields across the maturity spectrum occurred on these five key dates: 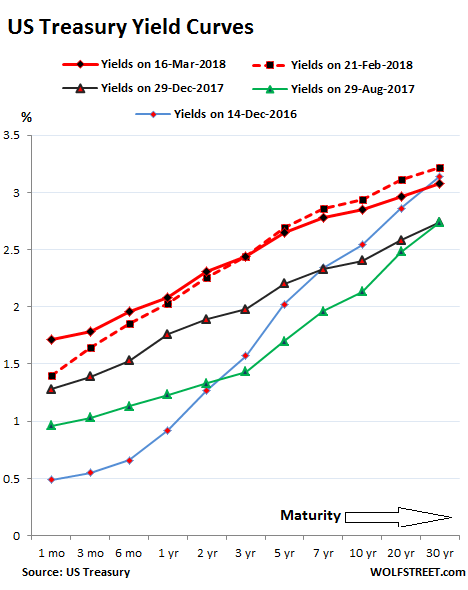 These yields at the long end have since reversed slightly, but short-term yields have surged, leaving the yield curve on Friday (solid red line) somewhat flatter than it had been on February 21.

But I do not think that the yield curve will “invert” – a phenomenon when short-term yields are higher than long-term yields, which has been closely associated with recessions or worse. The last such inverted yield curve occurred before the Financial Crisis.

This time, the Fed has a tool that it didn’t have before: During QE, it acquired $1.7 trillion in Treasuries and $1.8 trillion in mortgage-backed securities that it has now started to unload. It can start jawboning the markets by telling them that it will unload the securities more quickly, and it could then actually unload them more quickly. This would be a “monetary shock.” It would put a lot of pressure on long-term Treasuries, and yields would jump at the long end of the curve, thus steepening the yield curve and causing all kinds of turbulence.

It may already be in the works. The first Fed Governor came out and said that the QE Unwind isn’t fast enough. And because it’s so slow it may actually contribute to, rather than lower, “financial imbalances.” Read…  QE Unwind Is Too Slow, Says Fed Governor, Thus Launching First Trial Balloon

45 comments for “What’s Going on in the Treasury Market?”