Bond prices fall when yields rise. And the selloff in three-year maturities and below shows that the short end of the bond market is reacting to the Fed’s rate-hike environment.

Though the “new Fed” in 2018 hasn’t fully taken shape yet, with several key vacancies still to be filled, there is already tough talk even among the “doves.” And that’s where tough talk matters.

On Thursday it was New York Fed President William Dudley who outlined the “two macroeconomic concerns” he is “worried about”: “The risk of economic overheating,” and that the markets are blowing off the Fed. In the end, the Fed “may have to press harder on the brakes,” he said.

On Friday, it was Boston Fed President Eric Rosengren who told the Wall Street Journal that he expected “more than three” rate hikes this year to get this under control before it’s too late. “I don’t want to get to a situation where we have to tighten more quickly,” he said, citing specifically the “fairly ebullient financial markets,” and the risks of waiting too long.

Labor markets have become “tight.” Consumer prices as measured by annual CPI rose 2.1% in December. This means that Treasury securities with maturities of less than three years are still losing their purchasing power faster than they’re compensating investors for it with higher yields. This is considered very stimulative.

In June, the trough of last year’s “low inflation” dip, CPI rose by 1.6%. Wall Street and its economists were clamoring for no more rate hikes. But Fed Chair Janet Yellen shrugged them off, saying that there were some special effects that caused this dip in inflation, but that it would be “transitory.” By early October, the underlying data showed that Yellen had been right.

Even while Wall Street’s economists continued to clamor for a slow-down of the already glacially slow rate hikes, the Treasury bond market was starting to read the memo. And recently, its inflation expectations have spiked.

The Treasury market’s inflation expectations can be seen in the premium that investors demand for holding 10-year Treasuries over Treasury Inflation Protected Securities. The principal of these TIPS increases at the rate of annual CPI. Thus the principal is protected from inflation. Holders also receive a small yield. The difference between the TIPS yield and the 10-year yield – the premium investors demand – is the bond market’s expectation of where inflation is headed over the next ten years. That expectation breached 2% on January 4 for first time since last March. It ended Friday at 2.01%. Note how it has recently been spiking: 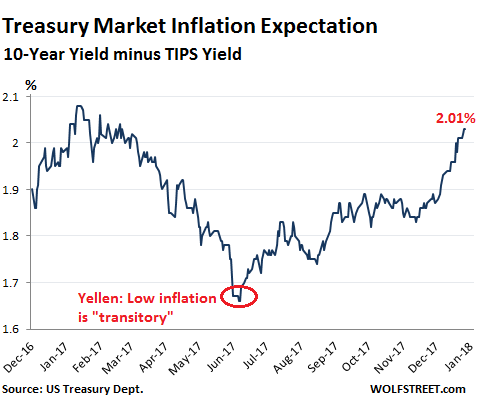 How did this happen? In recent weeks, investors, increasingly worried about inflation, bought TIPS. Prices of TIPS rose and their yields fell. At the same time, these worried investors sold off their regular Treasuries. Prices fell and yields rose. This is a time-honored strategy by conservative investors when facing an environment of rising inflation.

The widening difference between the yields of TIPS and Treasuries is how the bond market puts a number on its inflation expectation – a number that the Fed watches closely.

Investors stand to lose a lot if inflation rises further over the next few years because today’s still low yields won’t compensate them for the loss of purchasing power. And they’re getting just a wee-bit nervous about it.

This nervousness will be one of the factors driving the 10-year yield higher. There are other factors too, including the increased supply of government bonds needed to finance the larger deficits following the tax cuts, and the biggie: The Fed’s QE Unwind, or “balance sheet normalization.” The scheduled balance-sheet shrinkage accelerates this year to:

The 10-year Treasury is the benchmark for consumer and business credit. As the 10-year yield rises, so will mortgage rates, interest costs on business debts, and the like. In short, borrowing over the longer term will get more expensive. Companies will back off from expansion projects and hiring, reducing pressure on wages, etc.

This is what the Fed wants to accomplish. The 10-year Treasury yield is one of the transmission channels of the Fed’s monetary policy into the real economy, and it has been slow to kick in. But it is starting to.

During prior incidents of an “inverted” yield curve, the Fed had no tools to get the market to push up long-term yields. Today it has one: the QE Unwind. Read… The Dreaded “Flattening Yield Curve” Meets QE Unwind