Fed’s assets drop to lowest level in over three years.

The Fed’s balance sheet for the week ending December 6, released today, completes the second month of the QE-unwind. Total assets initially zigzagged within a tight range to end October where it started, at $4,456 billion. But in November, holdings drifted lower, and by December 6 were at $4,437 billion, the lowest since September 17, 2014: 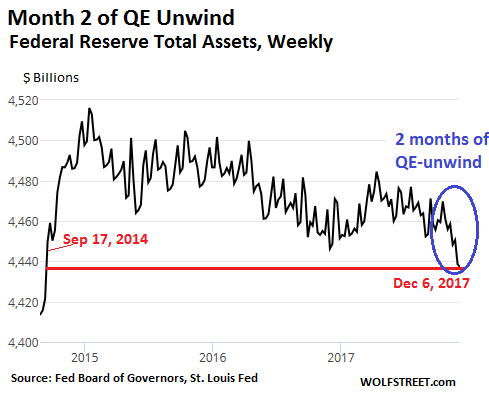 “Balance sheet normalization?” Well, in baby steps. But the devil is in the details.

The Fed’s announced plan is to shrink the balance sheet by $10 billion a month in October, November, and December, then accelerate the pace every three months. By October 2018, the Fed would reduce its holdings by up to $50 billion a month (= $600 billion a year) and continue at that rate until it deems the level of its holdings “normal” – the new normal, whatever that may turn out to be.

Still, the decline so far, given the gargantuan size of the balance sheet, barely shows up: 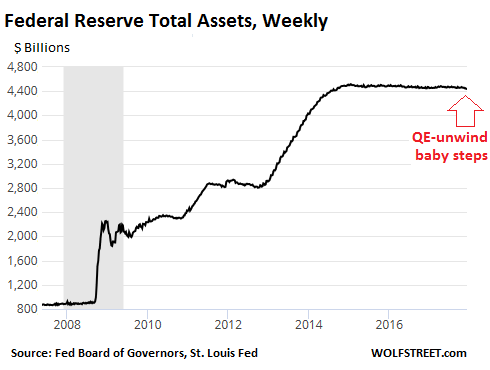 The Fed is unloading its Treasuries alright.

As part of the $10-billion-a-month unwind from October through December, the Fed is supposed to unload $6 billion in Treasury securities a month plus $4 billion in mortgage-backed securities (MBS) a month.

The Fed doesn’t actually sell Treasury securities outright. Instead, it allows some of them, when they mature, to “roll off” the balance sheet without replacement. When the securities mature, the Treasury Department pays the holder the face value. But the Fed, instead of reinvesting the money in new Treasuries, destroys the money – the opposite process of QE, when the Fed created the money to buy securities.

This happens only on dates when Treasuries that the Fed holds mature, usually once or twice a month.

In November, there were two big maturity dates: 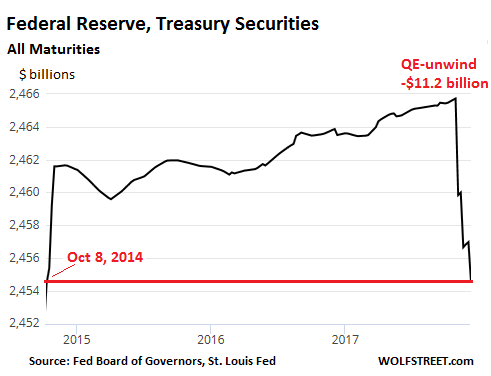 Mortgage-backed securities are a different animal.

As part of QE, the Fed acquired residential MBS guaranteed by Fannie Mae, Freddie Mac, and Ginnie Mae. Now, as part of its $10-billion-a-month QE-unwind, the Fed is supposed to shed up to $4 billion a month in these MBS. And?

At the beginning of October, the Fed held $1,768.2 billion in MBS. The balances then jumped up and down on a weekly basis and ended October at $1,770.6 billion, or $2.4 billion higher than at the beginning of the QE-unwind.

Same scenario in November, though they have started to edge down overall just a tiny bit to $1,767 billion, the lowest by a smidgen since March 8, 2017: 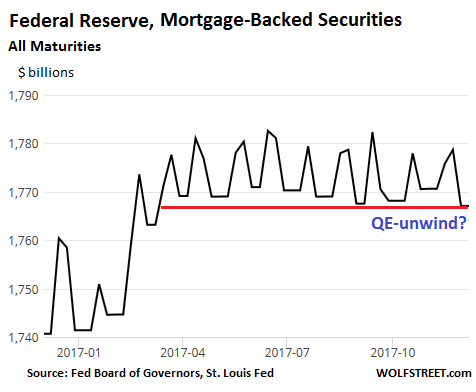 Residential MBS differ from bonds. Fannie Mae et al. regularly pass through principal payments to MBS holders as underlying mortgages get paid down or get paid off. Thus, the principal shrinks until the remainder is redeemed at maturity.

To keep the MBS balance steady, the Fed, via the New York Fed’s Open Market Operations (OMO), buys MBS in the “to-be-announced market,” or “TBA market.” This is a trade where the actual MBS is not designated at the time of the trade but will be announced 48 hours before the established settlement date, which can be two to three months later.

But the Fed books its MBS holdings on a settlement-date basis. So there is a mismatch between the date the Fed receives principal payments and the date reinvestment trades settle. Hence the jagged line in the chart above.

So when will the $4-billion-a-month in MBS reductions show up on the Fed’s balance sheet?

The first MBS reinvestment trades under the QE-unwind plan were conducted in October. Given the lag to settlement date of two to three months, the first visible impact on the balance sheet would start no earlier than December. This is where we are now, on the verge of seeing it.

The line in the MBS chart will always bounce up and down due to the mismatch between the date the Fed receives principal payments and the date reinvestment trades settle. But the line should start trending down, with noticeably lower lows and lower highs.

For the first three months, the QE unwind only removes about $10 billion a month, a negligible amount, given the vast markets and excess liquidity. But it picks up steam every three months. By October 2018, if the plan is still on, the QE unwind will remove $50 billion a month from the markets. This process will do the opposite of what QE had done: it will gradually destroy some of the $3.6 trillion that the Fed had created during QE. And by that time the broader effects of QE – asset price inflation – should also start to reverse.

There were no flashy announcements, to avoid alarming the markets. Read…  Bank of Japan Tapers (Quietly), QE Party Over

122 comments for “The Fed’s QE-Unwind is Really Happening”