No flashy announcement, to avoid alarming the markets.

After years of blistering asset purchases, the Bank of Japan disclosed today that it held a total of ¥521.6 trillion in assets as of November 30, including Japanese Government Bonds (JGBs), gold, corporate bonds, Japanese REITs, equity ETFs, loans, etc. That is quite a pile, so to speak. It amounts to about 96% of Japan’s GDP.

By this measure, the BOJ’s balance sheet dwarfs the Fed’s balance sheet, which amounts to 23% of US GDP. When it comes to QE, no one can hold a candle to Japan. Its holdings of JGBs alone rose to ¥443.6 trillion. Its balance sheet looks like a typical post-Financial-Crisis central-bank balance sheet on steroids (chart in trillion yen): 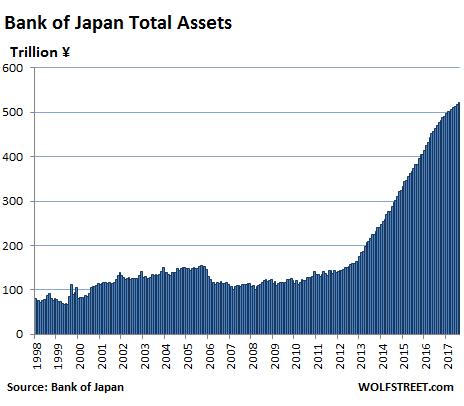 There a couple of differences compared to other central banks: One, the BOJ started QE long before anyone even called it “QE,” but in 2013, it really got going, and those giant moves made the prior periods of QE look minuscule. And two, the BOJ actually unwound some of its earlier QE starting in late 2005 but soon gave up on it.

Now something else has been happening: Starting in December 2016 – the month the Fed raised rates and a few months after some Fed governors started to kick around the idea publicly that QE should be unwound – the BOJ began to curtail its asset purchases.

This chart shows the 12-month change in the balance sheet in trillion yen, going back to the Financial Crisis: 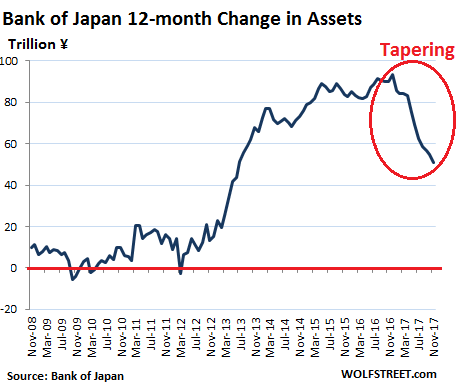 In terms of percentage change, the tapering is even clearer. In early 2014, the BOJ exploded its balance sheet by 47% year-over-year. In November 2017, the year-over-year increase was just 10.8%: 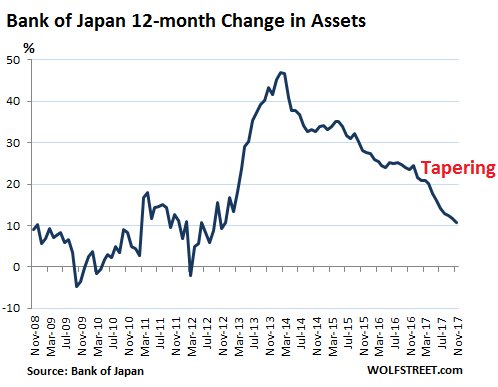 The BOJ has used QE as a politically correct pretext to bring Japan’s public debt under control by effectively removing JGBs from the market, thus strangling the market, in order to prevent a debt crisis – the kind of mess that happened to Greece.

But it seems that the BOJ thinks that this might be about enough. And it has tapered its purchases.

The Fed leads, other central banks follow. But the BOJ follows no one. It’s in a universe of its own, given the debt that Japan has to deal with. Nevertheless, it has been tapering in the Fed’s tootsteps, while the Fed has been removing accommodation.

Similarly, the ECB began tapering in April 2017, reducing its monthly purchases from €80 billion in prior months, to €60 billion. And on October 26, the ECB decided to taper further, reducing its monthly purchases to €30 billion. But unlike the Bank of Japan, the ECB communicated this tapering via announcements and press conferences that were plastered all over the media, after preparing the markets for months for these announcements.

So the QE booze that the financial markets of those three economies — and of the rest of the world — have gotten drunk on is running low and will soon run out. And then it’s hangover time.

In the US, the Fed is considering the tax cuts and “elevated asset prices.” Read…  The Fed Might “Surprise” Markets with its Hawkishness in 2018

39 comments for “Bank of Japan Tapers (Quietly), QE Party Over”