But only a few lost souls in Congress care.

Even as lawmakers are trying to cobble together a tax-cut bill that would cut revenues by $1.5 trillion over ten years, the gross national debt has spiked $723 billion over the past 12 weeks since Congress suspended the “debt ceiling.” It just hit $20.57 trillion, or 105% of GDP.

Over the past six years, since November 2011, the gross national debt has surged nearly 40%, or by $5.8 trillion. Back in 2011, gross national debt amounted to 95% of GDP. Before the Financial Crisis, it was at 63% of GDP. There are no signs that the relentless rise in the debt is slowing down. On the contrary – the tax cuts are going to steepen the curve: 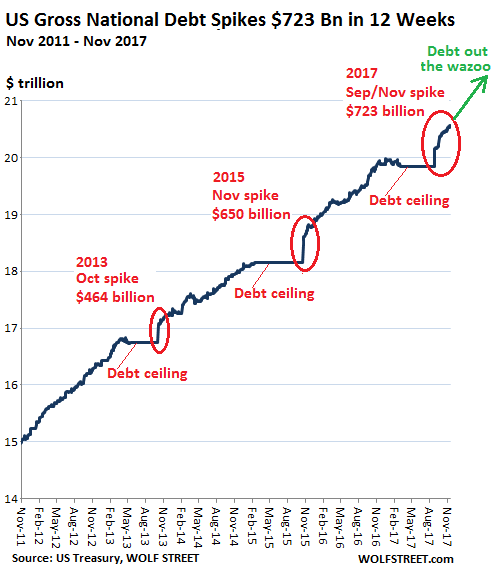 In the chart above, note the last three debt-ceiling fights – the flat lines in 2013, 2015, and 2017, followed each time by an enormous spike when the debt ceiling was lifted or suspended, and when the “extraordinary measures” with which the Treasury keeps the government afloat were reversed.

And the Fed is getting increasingly nervous about the “sustainability” of this debt.

There are only a few lawmakers left in Congress that have a sense of fiscal responsibility. One of the lost souls is Senator Bob Corker, a Republican from Tennessee, who, to address his anxieties about the deficit and the debt, wants to add a provision to the tax-cut bill that would raise taxes automatically if the economy doesn’t hit certain growth targets in the future. This “trigger” is designed to slow by a smidgen the relentless rise of the national debt. He has come under withering criticism for it from Republican lawmakers and conservative lobbying groups.

Fitch Ratings believes that “under a realistic scenario of tax cuts and macro conditions,” the US gross national debt will balloon to 120% of GDP by 2027. The way things are going right now, that is likely an impossibly rosy scenario.

So on Wednesday, Fed Chair Janet Yellen was telling Congress about the economy, its challenges, and the “disappointingly slow” recovery since the recession. And when she was asked about this “trigger,” she said that it was up to Congress to decide how to confront the fiscal outlook, but added that she was worried about the “sustainability of the US debt trajectory”:

“The idea of triggers is motivated by the concern that some have over the picture we have of debt sustainability now and into the future, and I would simply say I am very worried about the sustainability of the US debt trajectory.”

The future of the deficit and the debt trajectory “should be a very significant concern,” she said.

On Monday, Dallas Fed President Robert Kaplan had chimed in about the unsustainability of the trajectory of the national debt. Further complicating his assessment: In addition to the $25.57 trillion in outright debt, there are also the “unfunded entitlements” with a present value of “approximately $49 trillion,” he said. And he added:

“In my view, the projected path of US government debt to GDP is unlikely to be sustainable – and has been made to appear more manageable due to today’s historically low interest rates.”

Ah yes, the admission: The Fed’s interest rate policy has made the US debt only “appear more manageable” because it brought down the cost of servicing this debt and removed an incentive for Congress to do anything about it. But when rates are rising as they are, at the same time when the debt is ballooning as it is, this debt will start imposing an ever larger burden on the budget, and it will become less and less manageable.

So here you have it. The trajectory of US government debt is “unsustainable,” according to Yellen, Kaplan, and many others. In fact, just about everyone acknowledges this except for the only people that can actually do something about it: the lawmakers in Congress. They don’t even know the meaning of “unsustainable.” It’s not part of their vocabulary. It has been replaced by “fund raising” and “campaign contributions.” And they’re happier than ever to run up the debt, no holds barred.

The Fed is increasingly pointing at “excesses,” “distortions,” and “imbalances” in the markets. Read… Stock Market Lazes Happily on a Powerful Time Bomb, and the Fed Begins to Worry

153 comments for “US Gross National Debt Jumps $723 billion in 12 Weeks, Yellen “Very Worried about Sustainability of US Debt Trajectory””