Bank of Mexico caught in a vise.

In the last week, the governor of the Bank of Mexico (or Banxico), Augustin Carstens, stepped down in order to take over the reins as general manager of the Bank for International Settlements in Basil, Switzerland, while Finance Minister José Antonio Meade, handed in his resignation to run as the presidential candidate for the governing PRI party in next year’s general elections.

Despite the fact that the country’s two most senior public financial officials have left their posts within days of one another, and though the Mexican stock index is down about 9% from July, the markets still seem pretty sanguine.

But that doesn’t mean that problems are not stacking up.

Earlier this year Carstens felt compelled to postpone by five months his departure from Banxico, which was initially scheduled for May, in the hope that his continued presence would help steady investor nerves as well as tame inflation, which began soaring after the government’s one-off hike in gas prices at the beginning of this year.

It didn’t quite work out that way. Despite the Bank of Mexico’s policy rate of 7%, consumer prices in Mexico hit a higher-than-expected annual rate of 6.6% in the first two weeks of November. “Obviously, the final photo of my mandate isn’t the best,” Mr Carstens told the FT. 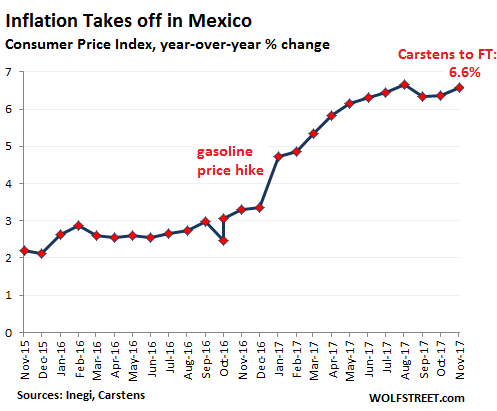 While inflation has surged, economic growth remains sluggish compared with many other countries, including Mexico’s direct neighbor to the north. Banxico is forecasting growth this year of 1.8% to 2.3%. But even that may end up proving to be optimistic after it was revealed this week that third-quarter gross domestic product had shrunk by 0.3% compared with the previous quarter, as manufacturing declined more than expected. It was the first quarter-to-quarter GDP contraction since Q4 2015.

“This deceleration is largely explained by a temporary and limited impact from the (recent) natural disasters,” the Finance Ministry said in a statement on Friday, citing the oil, education and tourism industries. Of course, there’s also the unmentioned fact that credit has got a lot more expensive as a result of Banxico’s contractionary monetary policy.

Now, with inflation already more than double the central bank’s 3% target, Banxico has little room to stimulate Mexico’s stuttering economy. The bank’s new governor, Alejandro Díaz de León, who was promoted from deputy governor on Wednesday, is well aware that many of the factors spurring inflationary pressure, such as seasonal fuel price rises and expansionary monetary policies in other parts of the globe, are beyond the bank’s control. There’s also the prospect of the Federal Reserve further hiking US interest rates in December, which would heap even more pressure on Mexico’s currency.

If that were to happen, Banxico would have little choice but to raise interest rates even further, which would risk further stifling an economy that has struggled to bounce back after back-to-back earthquakes in September. Fears over political instability next year as well as a possible breakdown in NAFTA renegotiations are also dampening investor sentiment.

In an interview with Bloomberg, Carstens tried to warn Mexico’s next president off trying to change Banco de Mexico’s exclusive inflation mandate. The message was clearly intended for one particular person: Andrés Manuel López Obrador (or AMLO as locals like to call him), the populist leader of the strongly leftist party Morena who came within 250,000 votes of winning the 2006 elections.

AMLO has tried to calm market jitters over the prospect of his election by promising to keep inflation and public debt low, but he’s also pledged to raise taxes and increase public spending. And that’s not what the markets want to hear. He also plans to sharply raise the minimum wage to foment consumption and the internal market, as well as improve salaries for public workers.

It’s a pledge that could prove extremely seductive in a country where real wages for many workers have not just stagnated but dropped. After 23 years of NAFTA, the average Mexican earns less in comparison with his American or Canadian counterparts than he did before the trade agreement came into effect, much to the consternation of unions in Canada and the United States.

It’s a trend that continues to worsen as time goes on. According to Mexico’s National Council for the Evaluation of Social Development (CONEVAL), an independent government organization, the percentage of the population with daily earnings lower than the basic daily food basket — just 92 pesos ($4.96) — rose from 40% to 41.8% between the third quarter of 2016 and the third quarter of 2017. This prompted calls for the government to raise the minimum wage to 92 pesos per day, to at least cover the basic daily food basket, but Banxico warned against such a drastic step, cautioning that it could add further fuel to inflation.

In the end, the government took a halfway measure, raising the minimum wage by 10% from 80 pesos ($4.20) a day to just over 88 pesos ($4.60) a day. If inflation remains high while the economy continues to stutter, economic conditions for many Mexicans, in particular those on lower incomes, are going to get even harder. And with public discontent already high, that is the last thing the government needs in an election year. By Don Quijones.

10 comments for “Inflation Surges as Economy Bogs Down in Mexico”