Pointing at “excesses,” “distortions,” and “imbalances.”

Margin debt in the stock market hit another record, $561 billion at the end of October, up 16% from a year ago, the New York Stock Exchange reported on Tuesday. Margin debt and the stock market move together. And even on an inflation-adjusted basis, the surge has been breath-taking.

This chart shows margin debt (red line, left scale) and the S&P 500 (blue line, right scale), both adjusted for inflation to tune out the effects of the dwindling value of the dollar over the decades (chart by Advisor Perspectives): 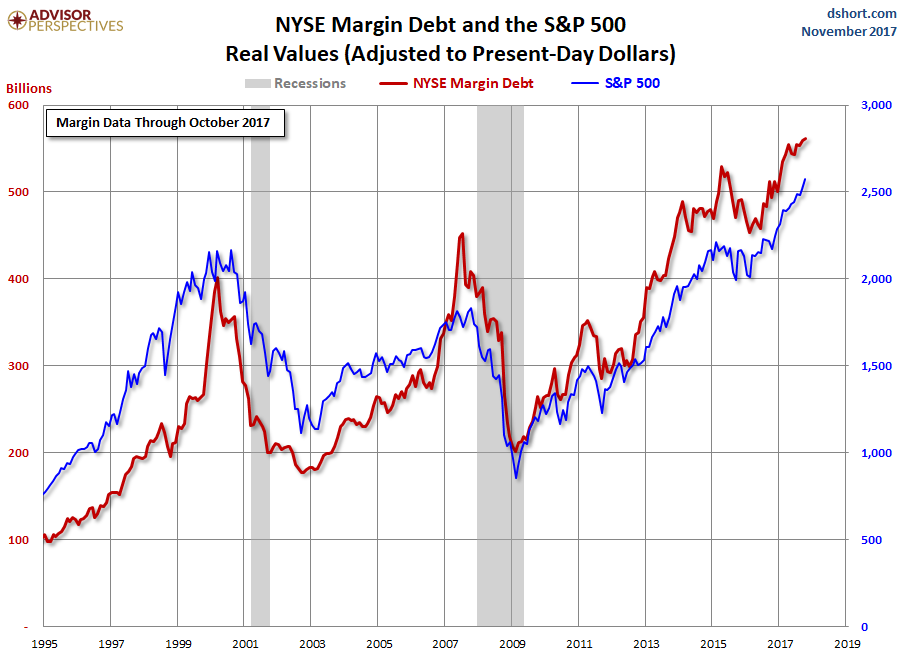 Stock market leverage is the big accelerator on the way up. Leverage supplies liquidity that has been freshly created by the lender. This isn’t money moving from one asset to another. This is money that is being created to be plowed into stocks. And when stocks sink, leverage becomes the big accelerator on the way down. When stocks are dumped to pay down margin debt, the money from those stock sales doesn’t go into another asset and doesn’t sit around as cash ready to be deployed and it doesn’t go into gold bars either. It just disappears.

Even the Fed is now worried about margin debt and a slew of other factors not related to consumer price inflation but to assets, asset prices, and debt.

The latest was Dallas Fed President Robert Kaplan on Monday who, in discussing financial and economic imbalances, specifically addressed the “record-high levels” of margin debt.

His premise is that “there are costs to accommodation in the form of distortions and imbalances,” and when “excesses ultimately need to be unwound, this can result in a sudden downward shift in demand for investment and consumer-related durable goods.” Kaplan:

It is of course possible that “this time will be different,” but as I assess the condition of the U.S. economy, I am carefully monitoring evidence that might suggest growing risks of real imbalances, which could threaten the sustainability of the current economic expansion.

Among the excesses he is “monitoring”:

Trading volumes of bonds and stocks have “markedly declined,” he says, pointing a NYSE trading volume that has plunged 51% from 2007 levels, even as the NYSE market cap has soared 28%.

Margin debt has reached “record-high levels,” he warns: “In the event of a sell-off, high levels of margin debt can encourage additional selling, which could, in turn, lead to a more rapid tightening of financial conditions.”

His worries are interesting for another reason: It seems he doesn’t exclude the possibility of a sell-off despite assurances by many that the Fed would never allow another sell-off – that it would instantly step in with another big round of QE. But he doesn’t seem to be worried about the sell-off but about liquidity in the market during a sell-off. 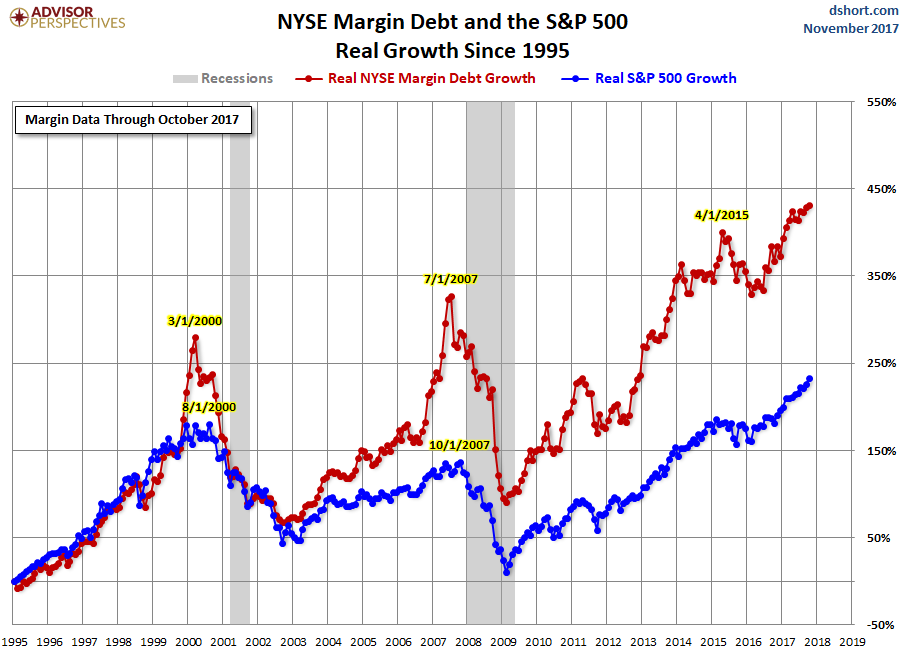 But this is only the reported stock-market leverage. It accounts for only a fraction of the total leverage in the stock market. Stocks can be leveraged in many ways.

For example, executives often borrow from their company to buy their company stock and put up those shares as collateral. Or larger players, such as hedge funds, can borrow at the institutional level to fund stock purchases. Then there are securities-based loans (SBLs), offered by financial firms to their clients. These loans can be used to buy anything, such as a boat or a vacation. They’re called “shadow margin” because no one knows the magnitude, but it’s huge, and it’s booming.

What the Fed is worried about is a replay of the last financial events – such as the 57% decline of the S&P 500 during the Financial Crisis – that were amplified by margin debt. Stock market leverage, all types of leverage combined, not just margin debt, is considered the best thing since sliced bread and makes everyone rich as long as stock prices are rising. But stock market leverage turns into a time bomb on the way down.

Kaplan is among a number of Fed governors who’ve indicated in this manner why rates need to rise (albeit “gradually”) though inflation, as the Fed defines it, remains below its target: It’s about asset prices, debt levels, and risks. They don’t want a repeat of 2008/2009. It seems they want the bubble they created to deflate gradually so it doesn’t take down the economy.

What, a first down-tick in home prices in Seattle? Read…  The US Cities with the Biggest Housing Bubbles

84 comments for “Stock Market Lazes Happily on a Powerful Time Bomb, and the Fed Begins to Worry”