IPOs have had a crappy time since that infamous February 2021, nearly two years ago, when the whole hype-and-hoopla show, fueled by what I call consensual hallucination, peaked and then started coming apart beneath the surface of the broader stock market. 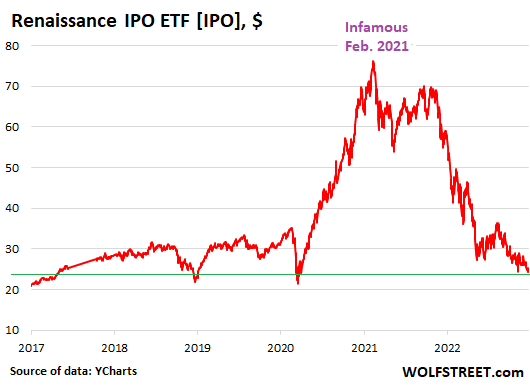 The IPO ETF tracks the largest most liquid IPOs that came to market over the past couple of years. The index is rebalanced on a quarterly basis; older IPOs are removed and new IPOs are added. Its top holdings at the end of Q3 were SnowFlake (10.5%), Airbnb (9.9%), Rivian Automotive (4.2%), Royalty Pharma (3.6%), and Palantir (3.6%).

The IPO ETF index does not include any stocks that went public via merger with a SPAC. That stuff is even worse. The CNBC Post SPAC Index, which tracks these stocks after the merger with a SPAC, has collapsed by 82% from its high on February 9, 2021.

But you have to hand it to the geniuses turned crybabies on Wall Street that are now railing about the rate hikes and QT: In 2021, they were still able to pop out nearly 400 IPOs, the most since 2000, to raise $142 billion, the most ever, according to Renaissance Capital.

And the geniuses-now-turned-crybabies on Wall Street were able to do this in 2021 even as the IPO hype-and-hoopla show had already been imploding since the mid-February-2021 peak, and even after I wondered on March 3, 2021, “Was That the IPO Stocks Bubble that Just Popped?” And even with all this stuff imploding left and right in 2021, forming the foundation for my pantheon of Imploded Stocks, Wall Street IPO mongers were able to raise a record amount of funds and dump these stocks at huge valuations into the lap of the public.

Which is of course exactly what they did in 2000, even as the Dotcom Bust was already in full swing. Back then, it took the Nasdaq Composite two-and-a-half harrowing years to plunge 78%, interrupted by huge sucker rallies, and it didn’t regain its former high until 15 years later, in 2015, six years into the money-printing-and-QE era.

The year 2021 was full of desperate moves by insiders to unload all kinds of stuff at huge valuations while they still could. 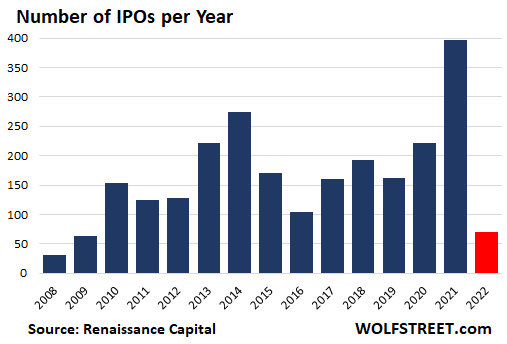 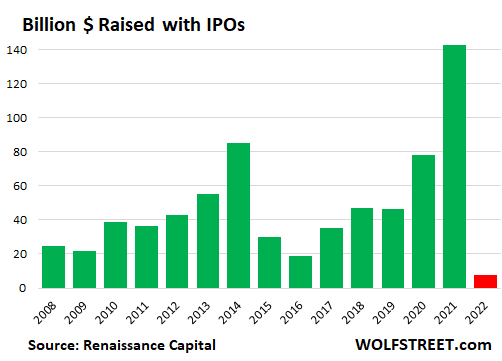 Bill Smith, Co-Founder and CEO of Renaissance Capital, in his regular Sunday note on December 25, had some interesting observations about the IPO market, about the trend over the past 10 years – the era of interest rate repression and money-printing by the Fed – and what is now coming of it:

“A couple weeks ago I described 2022 as a year of ‘resets’ but one reset largely hasn’t happened yet: Mark-downs of private companies. While public investors are feeling pain, we’ve avoided the hidden losses of the hundreds of large unicorns that stayed private, even if those losses go unrecognized.

“The IPO Market’s seismic shift over the past decade has been the explosion in huge private rounds at enormous valuations, as a result of the 2012 JOBS Act and years of easy money.

“After watching the post-IPO gains of Netflix, Google, Amazon, and Tesla, VCs sought to capture more upside by keeping portfolio companies private for longer. Meanwhile, founders didn’t want to deal with Wall Street’s focus on quarterly results. The saying went that ‘Private markets are the new public markets.’ Some VCs and PE firms even said illiquidity was a feature, since clients can’t sell at the bottom.

“However, an underappreciated fact is that public markets force a certain amount of financial discipline on companies, and the value of discipline is currently at an all-time high.”

A decade of Easy Money has given rise to all kinds of mindboggling financial nonsense, supported by all kinds of silly theories, convoluted rationalizations, and outright gobbledygook. It was fueled further by analysts and stock jockeys that had been too young to understand what happened during the Dotcom Bubble and Dotcom Bust, had never seen raging inflation, and came up with all kinds of bizarre stuff to make startup concoctions that didn’t have a leg to stand on sound like the next Amazon. They pulled stuff out of thin air to justify ridiculous valuations and make them seem normal. And they’d never seen how willfully wrong the entire VC industry can be for years when consensual hallucination sets in.

So now those analysts are in it for a learning experience, whose fruits will help avoid a similar debacle in the future?

Bill Smith sees some hopeful signs in this regard (and I do too): He wrote: “Another underappreciated fact: Bear markets make for well-rounded analysts. For the past decade, newer analysts have only known good times. Years from now, as they grow into mentors, those analysts can lean on the experience they gained navigating the ‘post-COVID’ recession.”

Yes, but… there were lots of “mentors” around that learned the ropes during the Dotcom Bust, and that have for years warned about this whole mindboggling scheme while Easy Money was turning brains into mush. And they tried to mentor the younger generation of analysts, but those old fossils were blown off because consensual hallucination was just so much more fun — and earned much bigger fees — than dealing with sordid reality.