The vast wealth of the top 1% households declined, the minuscule “wealth” of the bottom 50% increased a tad.

In the third quarter, the drop in asset prices continued to reduce the biggest wealth disparity ever between the “Bottom 50%,” who gained a little wealth, and the very top households – the “Top 0.1%” and the “Remaining 1%” – who gave up some of their vast wealth for the third quarter in a row, according to the Fed’s data on the distribution of wealth by category of wealth.

In other words, the tightening by the Fed – the higher interest rates and the beginning of QT that the crybabies on Wall Street bewail on a daily basis – has undone a small portion of the horrendous wealth inequality that the prior years of QE and interest rate repression had caused.

Alas, the Bottom 50% don’t show in the chart because their “wealth” is so minuscule that it’s just a straight line on top of the horizontal axis. Even the “Next 40%” (everyone below the Top 10% and above the Bottom 50%) have so little compared to the top 0.1%, they barely register at the bottom of the chart (green line). Note the gigantic wealth disparity between the 0.1% and the Remaining 1%. This is the nature of the wealth disparity in America, according to the Fed’s data. But QT and rate hikes are now undoing a little of it: 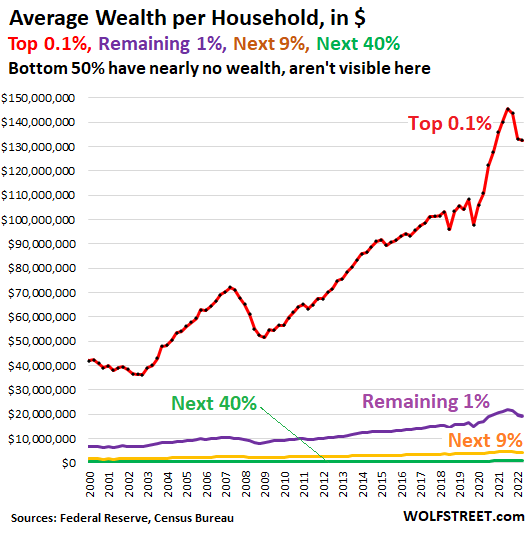 To put it into the perspective of households, I divided the Fed’s wealth data by the Census Bureau’s number of households to obtain the average wealth per household in the Fed’s categories of wealth.

Average wealth per household, by wealth category in Q3, 2022:

Here is the average wealth per household in Q3, by wealth category, and how it changed from the end of 2021 (in bold). Note the gain by the Bottom 50%:

The Bottom 50% own almost no stocks and mutual funds, which is why a stock-market swoon doesn’t faze them. Most of their assets are their home and “consumer durables.” Consumer durables are things like cars, appliances, electronics, etc., whose value depreciates.

Their wealth has increased by $10,800 per household on average in 2022, largely due to an increase of home equity and consumer durables. This is why half of Americans got nearly nothing when the Fed inflated the stock market with QE and interest rate repression; and they don’t care what happens to the stock market. What they care about is the purchasing power of their labor – and inflation, including house-price inflation, ate it up.

Here we’re looking with a magnifying glass at what in the chart above didn’t show because it was a straight line on the horizontal axis: 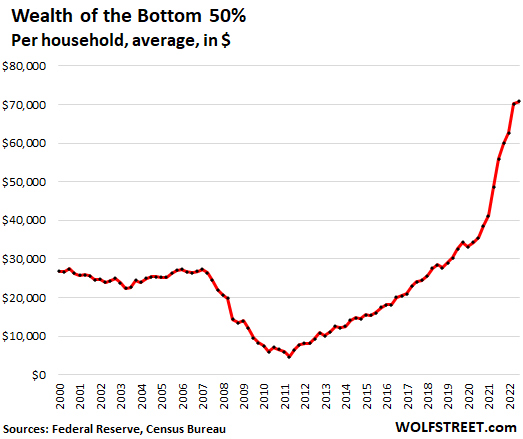 The Top 0.1% on average own a huge amount in stocks and mutual funds, and they own high-value private businesses. And they have relatively little debt, compared to their assets.

Their assets are spread across the board, and they too have relatively modest liabilities.

Their overall wealth dipped by only 2.5% due to their stock holdings. This is the green line in the first chart above under the magnifying glass: 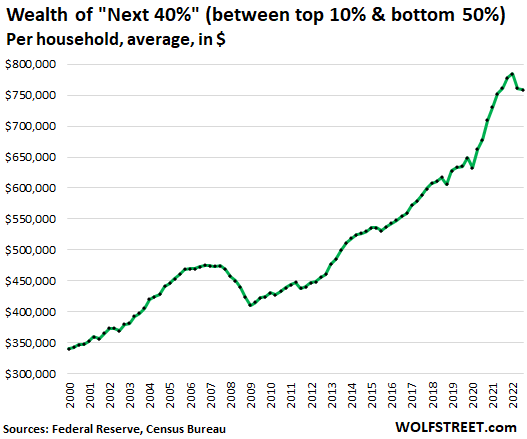 How did we get here?

During the era of QE and interest-rate repression, the “Top 0.1%” and the “Remaining 1%” got immensely richer, while the “Bottom 50%” had nearly no wealth to begin with, and still have nearly no wealth. QE and interest rate repression created the biggest wealth disparity ever in dollar terms, and in the shortest amount of time – and it turned into the greatest economic injustice of modern times.

It was based on asset price inflation – which the Fed long justified by its official policy, the “Wealth Effect,”  which counts on making the already wealthy a lot wealthier by inflating asset prices via interest-rate repression and QE, so that the then immensely wealthier can spend a little of this wealth, so that this can trickle down to the rest of society.

The Fed’s reversal of QE and interest-rate repression in 2022 is deflating the Everything Bubble and is thereby narrowing the horrendous wealth disparity that the Fed had wrought with its easy-money policies in the prior years.