San Francisco and Silicon Valley are now in the solid leadership role of the housing bust playing out in California with sales collapsing and prices heading south from the peak in April at an astonishing pace.

Just about everything that could come together came together. After a two-year outflux of workers due to working from anywhere, there came the collapse of the startup and crypto scenes, starting in 2021 and continuing unabated, leading to the early entries into my pantheon of Imploded Stocks. In early 2022 came the spike in mortgage rates. In mid-2022 came the downturn in employment at Big Tech. By that time, the Fed had been hiking its policy rates relentlessly, and Quantitative Tightening had kicked off. This was punctuated over the past two months by the chaotic dismantling of the workforce at Twitter and its ecosystem.

Local budgets have fallen into deep deficits – though most are still flush with cash from the pandemic funds received from the federal government and the state.

Vacant office space that is on the market for lease and sublease continues to balloon, while landlords have started to file for huge reductions in assessment values to lower their property taxes, which is going to cut revenues further.

This comes garnished by stories in the New York Times that Twitter stopped paying rent on its leased office spaces, and that it was instructed not to pay vendors. At least one of those unpaid vendors – a Silicon Valley company whose software Twitter had licensed – filed a lawsuit last week in San Francisco Superior Court for nonpayment. It stated, “shortly after Musk’s purchase of Twitter closed, Twitter refused to pay the outstanding quarterly invoice, which was due on November 30, 2022, and Twitter disclaimed any obligation to pay any future invoices…”

These are all signs that the housing market is going to get a lot messier. Prices have plunged the most in San Francisco, followed by the Silicon Valley counties of San Mateo and Santa Clara.

The median price of single-family houses sold in November in San Francisco plunged by 11.4% from October to $1.50 million, and by 27% from the peak in April, according to the California Association of Realtors. A nasty-looking chart: 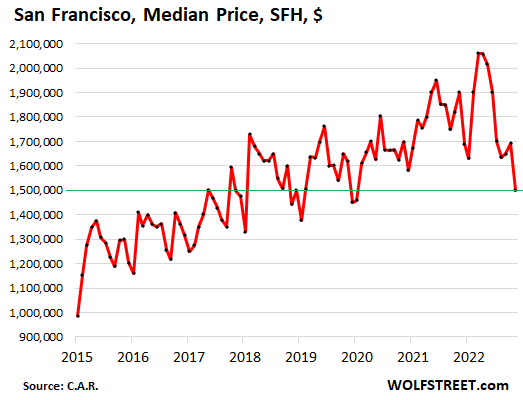 Seasonally, the lowest months are December and January. So that’s still to come.

But who is going to buy in the spring selling season? Prices normally rise as demand picks up in the spring; but who will be the exuberant tech workers that will want to overpay for a house by borrowing against the collapsed value of their stock options? Those lucky ones that still have jobs and stock options?

The housing markets in San Francisco and Silicon Valley are tied to the boom-and-bust cycles of the startup scene – now combined with the crypto scene and cryptos – and they’re tied to the stocks of startups and big tech and social media companies in the area, to the jobs that have to be done locally, and to the value of the stock options. All of them are puking.

Year-over-year, the median price of single-family houses in San Francisco plunged by 21%, the sixth month in a row of year-over-year declines. It was the biggest year-over-year plunge since the peak of Housing Bust 1: 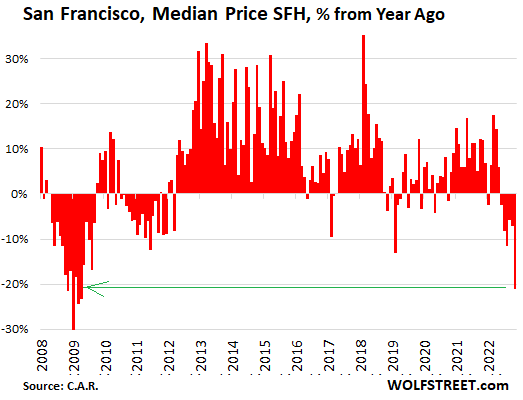 The median price of single-family houses in San Mateo County, which forms the northern part of Silicon Valley, plunged by 6.2% from October to $1.78 million, and by 26% from the peak in April. 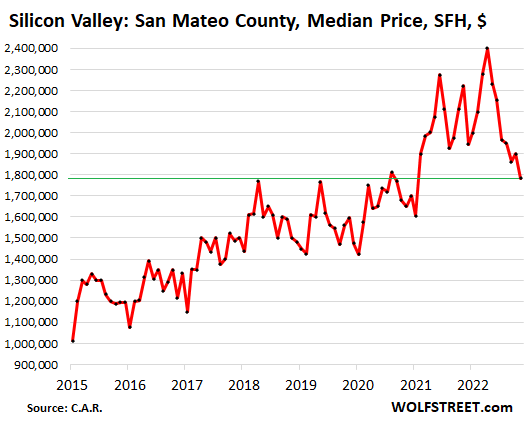 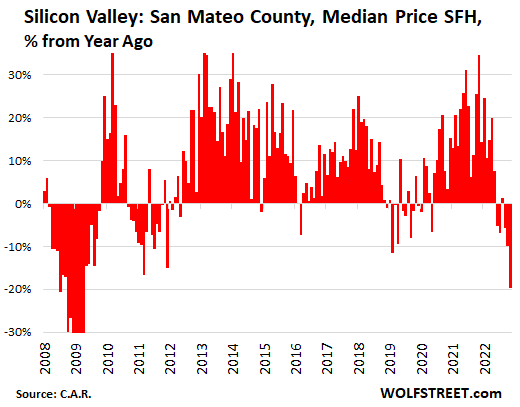 Santa Clara County, which forms the southern part of Silicon Valley and includes the Bay Area’s largest city, San Jose, is lagging behind but is moving right along. The median price of single-family houses dropped by 1.5% in November from October to $1.60 million, and by 19% from the peak in April: 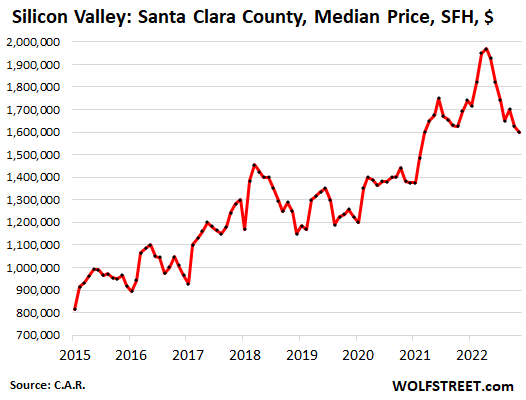 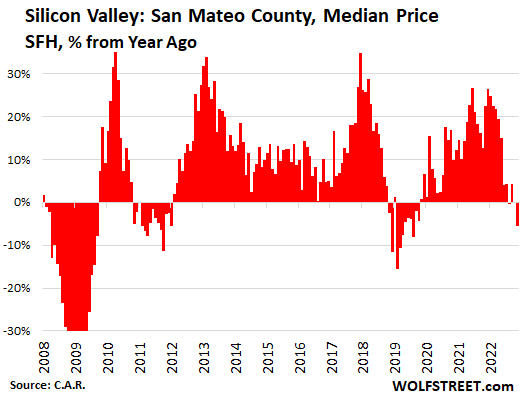 In all of California.

Sales of single-family houses in California collapsed by 47.7% in November, compared to a year ago, the biggest decline since 1980, according to the California Association of Realtors. Condo sales collapsed by 46%.