And in terms of “housing shortage” or “underbuilding?” Well, we’ll just go ahead and sink that meme.

The total numbers are somewhat dismal: Construction starts of all types of privately owned housing units – single family houses and units in multifamily buildings – fell by 8.1% in September from August, and by 7.7% year-over-year, to a seasonally adjusted annual rate (SAAR) of 1.44 million housing units, according to the Census Bureau today.

These initial estimates tend to get revised sharply up or down, and are very volatile. For example, in August these housing starts had spiked by a revised 13.7% from the prior month, following a veritable plunge in July. The September decline only worked off part of the August jump.

But there are important trends underway that these month-to-month ups-and-downs distract from:

The three-month moving average (3MMA) for construction starts of all types of privately owned housing units fell by 3% in September from August, by 6.9% from a year ago, and by 8.6% from the recent high at the end of 2020, to 1.46 million housing starts (SAAR), the lowest since October 2020. Residential construction did a U-Turn in April and hasn’t look back since.

The purple line reflects the average annual increase in households from 2000 through 2020 to shed light on the so-called “housing shortage” and the so-called “underbuilding.” 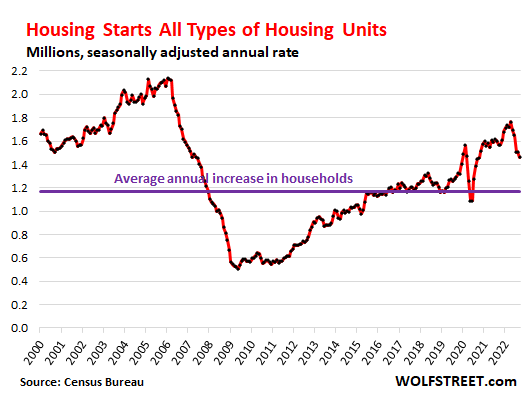 The real estate industry uses the term “housing shortage” to justify the home prices that have ballooned to ridiculous levels, which created the bizarre world where there is now a shortage of homes people can actually afford to rent or buy, but a glut of homes people cannot afford. If you have lots of money you can rent and buy lots of homes and just leave them vacant if you wish.

Turns out, there is no shortage of housing, just prices have been inflated beyond recognition. And some folks try to get some tax benefits by converting their vacant homes into vacation rentals.

The plunge in single-family construction: 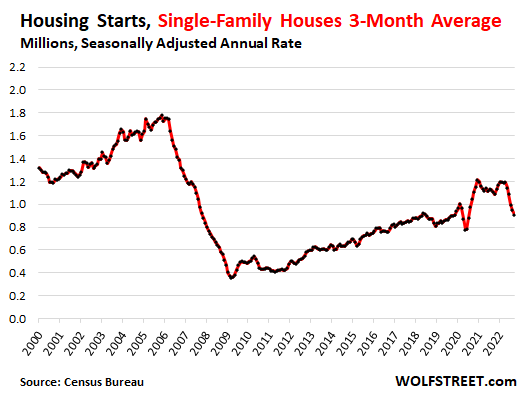 Construction had peaked in December 2020 amid the mind-boggling free-money boom orchestrated by the Fed’s QE and 0% interest-rate policy, and by the government’s efforts to throw as many trillions of dollars in as many directions as possible. And housing got some of it and boomed.

But by 2021, inventories of houses in various stages of construction began to pile up. And when mortgage rates began to spike earlier this year, demand began to fizzle.

Homebuilders are trying to unload massive inventories as demand has plunged and as traffic from potential buyers has collapsed to Housing Bust 1 levels. Homebuilders have said that they’re going to manage these inventories from both ends: By reducing construction and by trying to boost sales somehow.

But even at the peak in December 2020, construction starts were far below the historic boom during Housing Bubble 1 that created an enormous amount of excess inventory that took years of household growth to work off.

The boom in multifamily construction.

Construction starts of multifamily buildings of two or more units, such as condo and apartment buildings, dipped by less than 1% in September from August, to 551,000 units (SAAR, 3MMA). This was up by 18.6% from a year ago!

Over the past six months, construction starts had been in the range between 477,000 and 632,000 units (SAAR, individual months, not 3MMA) the highest range since the multifamily construction bubble in the 1980s, that began to unwind in 1986. 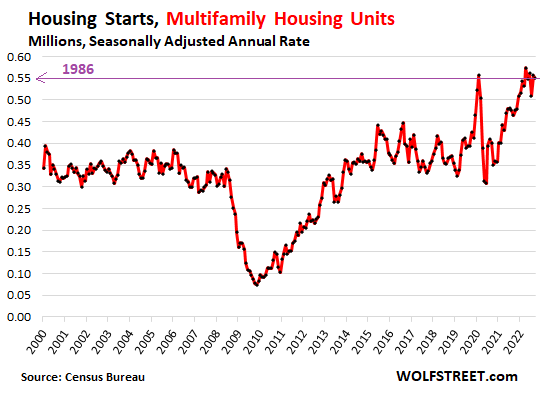 In many densely populated cities and urban centers, multifamily is just about the only type of housing that is getting built, such as in San Francisco, Boston, Manhattan, etc.

In San Francisco for example, there are currently 69,365 housing units in various stages of the development pipeline, and nearly all of them are in multifamily buildings, many of them on tracts of land to be redeveloped: Candlestick Park/Hunter’s Point Shipyard, Treasure Island, Parkmerced, Potrero Power Plant, Pier 70, etc., on top of numerous fill-in projects.

In big cities, this has been the trend for years, and people can choose where they want to live: in a new house further away, in an older house in the city, or in a new or older condo or apartment wherever it’s the most convenient for them.