The retail sales data, reported today by the Census Bureau, are based on surveys of about 5,500 retail businesses across the US, what they said their sales were. The measure is designed to track how well retailers are doing by retailer category, and we’ll get into those categories in a moment.

Another measure tracks spending by consumers, based on surveys of consumers. It’s reported separately and comes in an inflation-adjusted version. But not today (here’s June’s “Real” Consumer Spending).

Retail sales track sales of goods, not of services, and make up only a portion of what consumers spend their money on – and about two-thirds of consumer spending is for services, and spending has shifted back to services all year.

These are important distinctions between retail sales and consumer spending. I bring this up here because it always percolates through our illustrious comment section below the article.

Inflation at retailers = price increases. But where?

CPI inflation in July was 8.5% compared to July last year. Compared to June, CPI was flat. But this varied widely by product category. The CPI for services is spiking relentlessly but doesn’t figure into retail sales because retailers sell goods.

The CPI for gasoline: -7.7% in July from June; if gas stations sold the same volume in terms of gallons in July as in June, their retail sales of gasoline in dollars would have plunged by 7.7% from June. But they didn’t – they dropped by only 1.8%, as we’ll see in a moment.

The CPI for “food at home”: +1.3% in July from June. Which means, if consumers bought the same amount of food and didn’t shift to cheaper products, sales at grocery stores might increase by 1.3% for the month. But they didn’t. They ticked up only 0.2%, as we’ll see in a moment.

The CPI for durable goods: +0.3% in July from June and, after a decline in prior months, was flat with February. The spike in durable goods prices occurred in 2021 and has now largely settled down as inflation has shifted to services. Retailers that are selling durable goods (not food and gasoline) had relatively fewer and smaller price increases, if any, in July.

But gasoline prices plunged which cut the dollar-sales of gas stations; and new-vehicle dealers were woefully short on inventory (down by over 70% from 2019, in number of new vehicles) which handicapped their sales. So excluding gasoline and auto dealers, retail sales jumped up 0.7% in July from June. 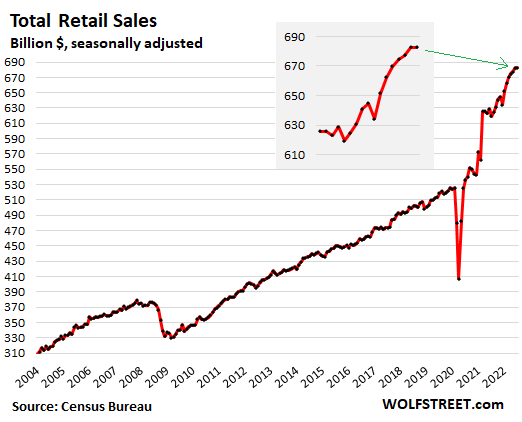 Retail sales minus sales at gas stations and auto dealers:

Sales by category of retailer.

Sales at New and Used Vehicle and Parts Dealers fell by 1.6% in July from June, to $125 billion, seasonally adjusted. Compared to July a year ago, sales were still up 2.1%, and compared to July three years ago, they were up 21%. This is the largest category of retail sales. 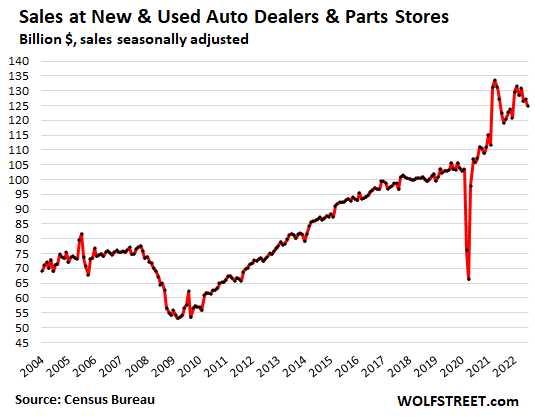 Sales at ecommerce and other “nonstore retailers” spiked 2.7% in July from June to a new record of $111 billion, seasonally adjusted, up by 20% year-over-year and up by 73% from July 2019, as consumers didn’t suddenly and inexplicably return to the mall – despite idiotic media hype to the contrary. See department store sales further below for how it worked out for them.

This includes sales by pure ecommerce retailers, and by the ecommerce operations of brick-and-mortar retailers, along with sales at stalls and markets: 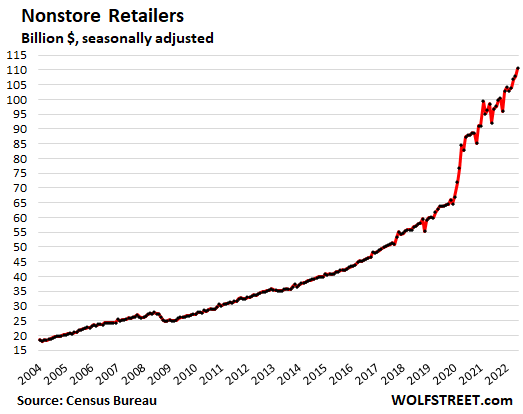 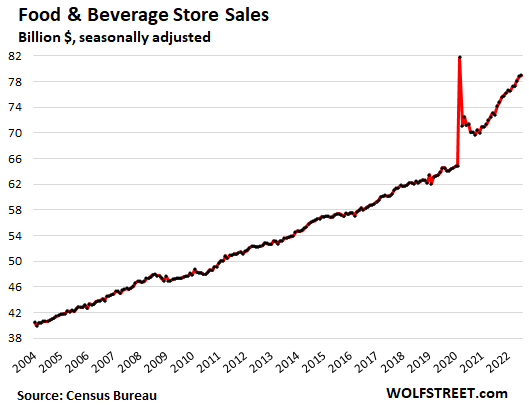 Food services and drinking places: Sales at bars, restaurants, cafes, cafeterias, etc. ticked up by 0.1% for the month, to a record $86 billion, up 11.6% year-over-year, and up 32% over three years. 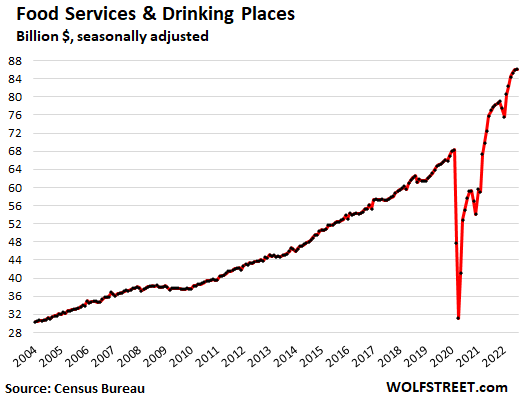 General merchandise stores: Sales fell 0.7% for the month, to $56 billion, and were up only 0.9% from the stimulus-miracle last year, and up by 15% over three years. Walmart and Target are in this category, but not department stores: 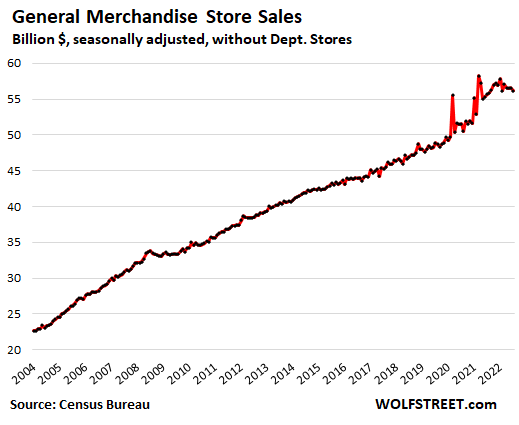 Gas stations: Prices plunged in July, and yet sales fell only 1.8% from June, seasonally adjusted, to $67 billion, the second highest ever, behind June. This was up by 40% from a year ago, and by 57% from three years ago, driven by the spike in prices that has now somewhat abated: 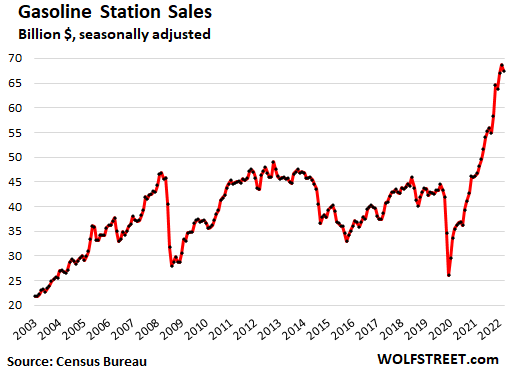 Building materials, garden supply and equipment stores: Sales jumped by 1.5% to $43 billion, seasonally adjusted, up 10% year-over-year and up 37% over three years: 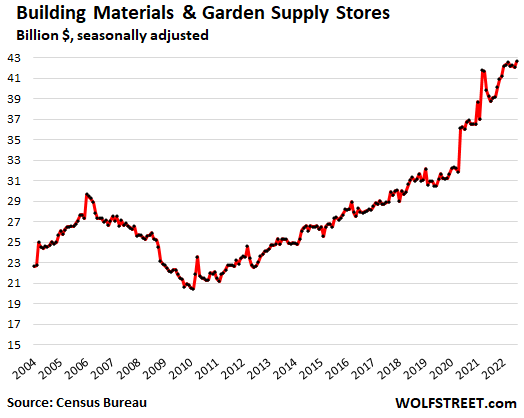 Clothing and accessory stores: Sales ticked down 0.6% for the month to $26 billion, up 2% year-over-year and up 15% over three years. 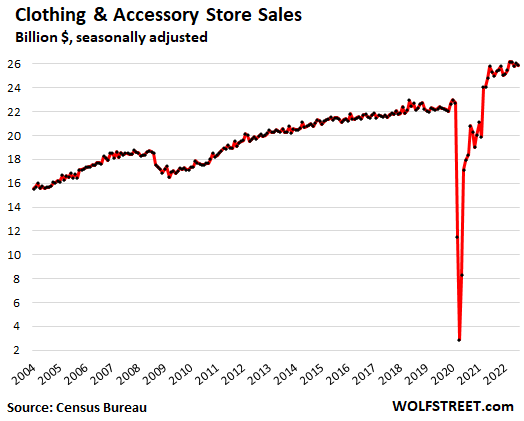 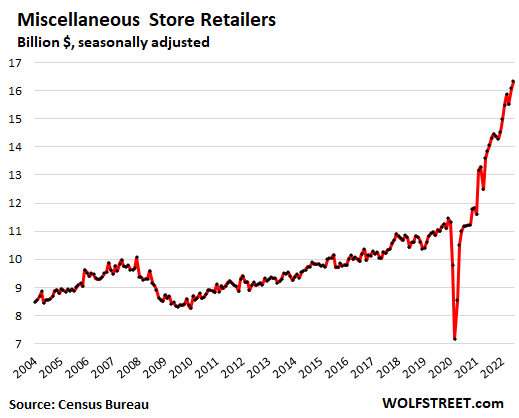 Furniture and home furnishing stores: Sales ticked up 0.2% for the month, to $12 billion, up 2% year-over-year, and up 20% over three years: 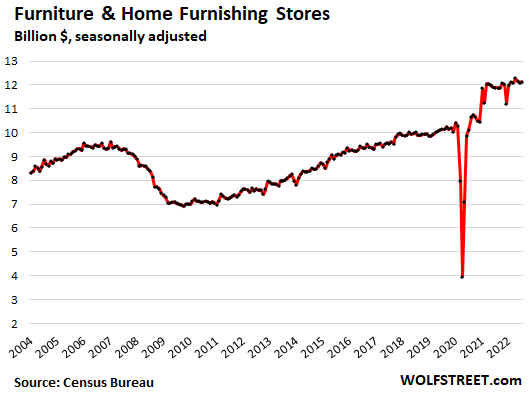 Department stores: sales fell 0.5% for the month, down 1.4% year-over-year, and down 3.3% over three years, to $11 billion. Compared to the peak in the year 2000, sales were down 44% as thousands of stores have vanished amid an endless series of bankruptcies and liquidations as Americans have chosen to buy their department-store stuff online: 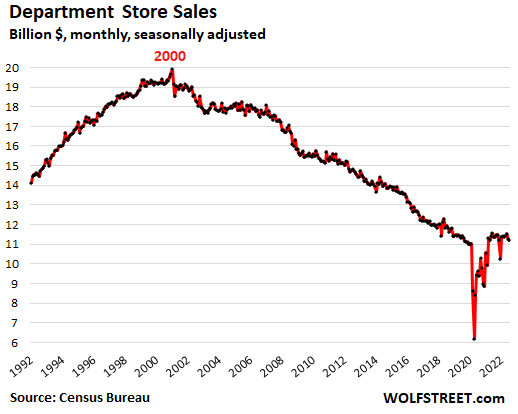 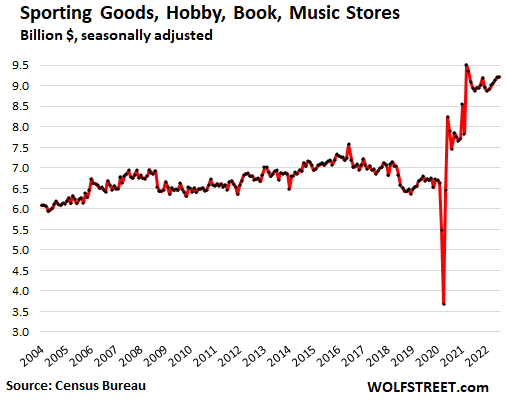 Electronics and appliance stores: Sales ticked up 0.4% for the month, to $7.6 billion, down by 10% year-over-year and down 1% over three years.