Another hype-and-hoopla “leading technology company” SPAC implodes and splinters into a million pieces amid investigations, fake accounting, unpaid payroll, missing cash, undisclosed debt, possible violations of state and federal laws, and a fired CFO. Just 18 months after going public! So this is a fun one for my Imploded Stocks column that I started last year to document how this clown show is coming unglued.

In an SEC filing this evening, Lottery.com, which describes itself as a “leading technology company,” but sells lottery tickets online, disclosed a laundry list of WTF-horror items, including that it’s going to shut down and vanish unless a miracle happens. On July 29, it already pre-announced its demise when it disclosed in an SEC filing that it wasn’t able to meet payroll and that it had laid off the “majority” of its employees.

The company announced in November 2020 that it would go public via merger with a SPAC. The merger was completed in February 2021, the infamous February after which it all started coming apart. Shares [LTRY] hit an intraday high of $17.50 in November 2021 and then kathoomphed, trading below $1 since mid-July. Everyone knows this stock is a goner and will go to zero, but folks are still shuffling it back and forth amongst each other to try to make a buck without ending up becoming the end-user of the shares after bids vanish (data via YCharts): 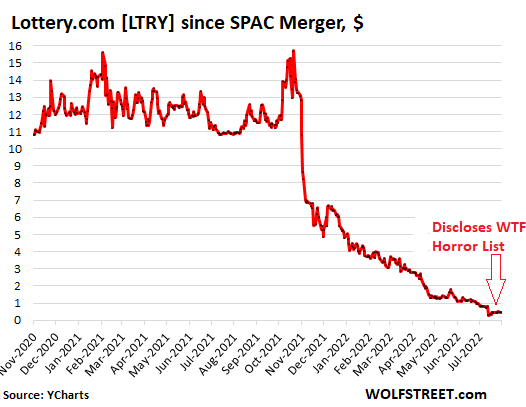 In the filing with the SEC this evening, where the company explained why it cannot file the required quarterly 10-Q earnings report for Q2 by the deadline, it disclosed a list of WTF horror show items.

Auditors find undisclosed $20 million in debt. Auditors “advised and determined” that a subsidiary “entered into a line of credit in January 2022 that was not disclosed in the footnotes to the December 31, 2021 financial statements and was not recorded in the March 31, 2022 financial statements.”

Could not make payroll, laid off majority of staff. “On July 28, 2022, the Board determined that the Company did not have sufficient financial resources to fund its operations or pay certain existing obligations, including its payroll and related obligations, and the Company furloughed the majority of its employees effective July 29, 2022.”

Out of cash. Obviously, since it couldn’t make payroll at the end of July, and somewhat belatedly, the company now says not without a sense of humor that, as its “capital resources are not sufficient to fund its operations for a twelve-month period, there is substantial doubt about the Company’s ability to continue as a going concern.”

Unless a miracle happens and a lot of cash shows up somehow, it’s over and “the Company will be forced to wind down some or all of its operations and pursue options for liquidating the Company’s assets, including equipment and intellectual property.”

Because of all this crap going on, the company doesn’t have any financial statements that can be relied on and “therefore” cannot file them with the SEC “on a timely basis.”

Why did this hype-and-hoopla mania ever happen?

This question will be studied for years. But my preliminary answer is that the benighted reckless money-printing by the Fed and by other central banks, combined with enormous stimulus payments sent by the government directly to consumers, businesses, and state and local governments created the greatest “anything goes” asset bubble ever that created the greatest consensual hallucination ever that was then brutally taken advantage by the people on Wall Street, in Silicon Valley, and elsewhere that engineered these SPACs and IPOs and crypto scams and crypto company IPOs, and the whole DeFi fiasco, and all the other stuff that many millions of people swallowed hook, line, and sinker, powered by said consensual hallucination.

And now it’s all coming apart. This won’t be over for years. This is way too big to be cleaned up by the small correction we’ve had so far.

124 comments for “Another Collapsed SPAC, Lottery.com, Discloses WTF Horror List and Says it Will Liquidate Unless Miracle Happens”