First signs the juice is coming out, with several months lag.

Signs are now everywhere that the crazy housing market is turning the corner. Earlier today the Census Bureau reported some chilling data on new house sales and prices, which plunged in June, as inventory surged to the highest since 2008. The National Association of Realtors reported last week that existing home sales in June also plunged, even as inventories jumped. The trio of national housing reports was rounded out today by the S&P CoreLogic Case-Shiller Home Price Index.

All real estate indices lag reality on the ground. But the S&P CoreLogic Case-Shiller Index lags the most, though it is perhaps the most reliable index for actual changes in home prices.

Today’s release of the Case-Shiller Index was for “May,” which consists of the three-month average of closed home sales that were entered into public records in March, April, and May, of deals that were made a few weeks earlier, roughly in February, March, and April.

In early February, mortgage rates were 3.5%. By mid-April, they pierced the 5% mark – roughly the range that applied to the deals in today’s “May” time-frame of the Case-Shiller Home Price Index (green box): 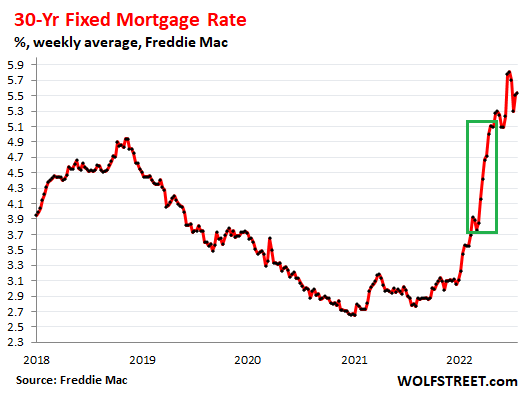 But the first signs of a slowdown are creeping into today’s S&P CoreLogic Case-Shiller Home Price Index, with declining month-to-month price gains: In “May” (average of March, April, and May), the index gained 1.5% from “April,” down from the gains of 2.3% and 2.6% in the prior two months.

In some markets, month-to-month price gains were still huge. In others, they were much smaller: +0.5% in Seattle, +0.6% in San Diego, +0.9% in San Francisco house prices, with condo prices being flat.

The year-over-year gain of the National Case-Shiller Index slowed to 19.7%, after having been above 20% in the prior three months.

San Diego metro: Prices of single-family houses rose by 0.6% in “May” from the prior month, which was just a pale imitation of the 4.5% jump in “February” and the 3.7% jump in “March.” In the chart, you can barely see today’s tiny uptick compared to the spikes in prior months.

This 0.6% gain whittled down the year-over-year gain to 25.6%, which is still ridiculous, but down from +29% a few months earlier.

The index value of 428 for San Diego means that home prices shot up by 328% since January 2000, when the index was set at 100, despite the plunge in the middle (CPI inflation amounted to 75% over the same period). This crowns San Diego the most splendid housing bubble on this list, followed by Los Angeles and Seattle. 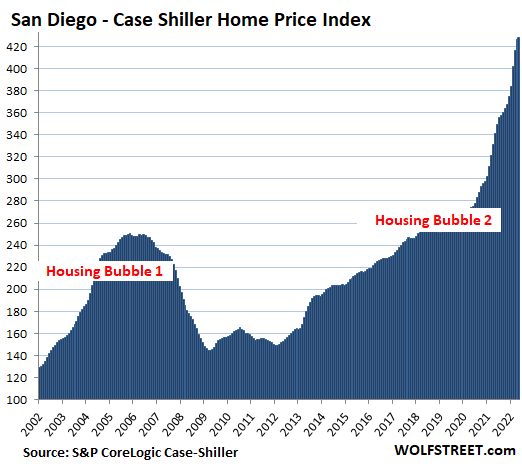 Los Angeles metro: +1.1% in May from April, still huge, but down from jumps of over 3% in February and March. This whittled the year-over-year spike down to +21.7%.

The index value of 423 indicates that house prices surged by 323% since January 2000, making the Los Angeles metro the second most splendid housing bubble on this list: 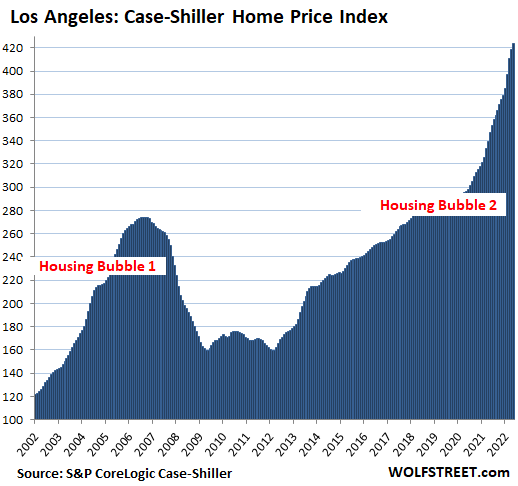 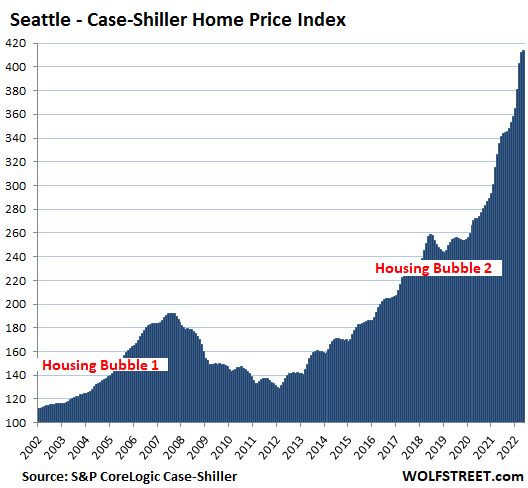 Not a miracle but house price inflation. The Case-Shiller Index uses the “sales pairs” method. The sales in the current month are compared to when the same houses sold previously. For example, the five-county San Francisco Bay Area has between 3,000 and 5,500 of these “sales pairs” each month, depending on the season. The price changes within each sales pair are then integrated into the index for the metro, and adjustments are made for home improvements (methodology). In this way, the index tracks the change in dollars it took to buy the same house over time, which makes it a measure of house price inflation. 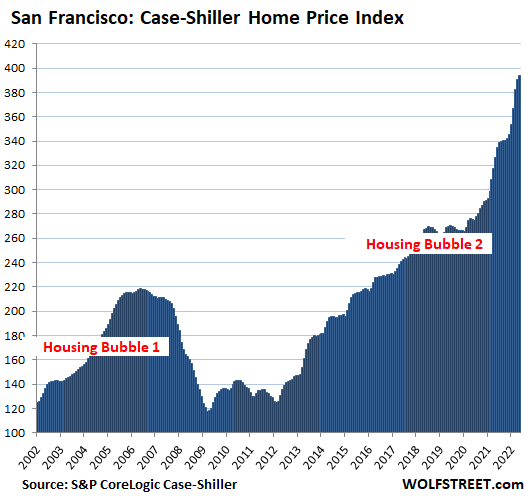 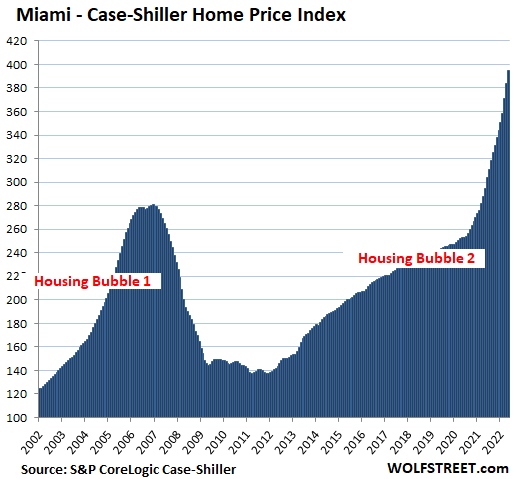 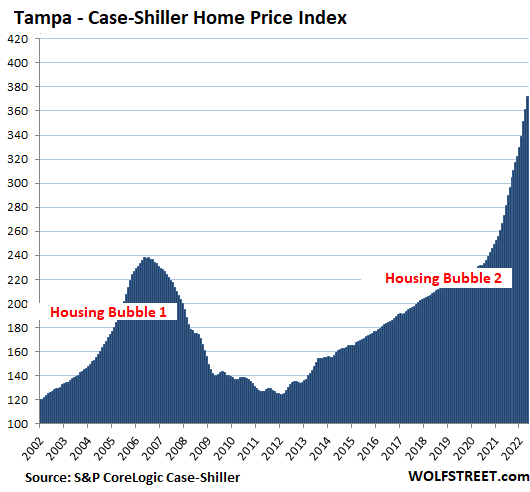 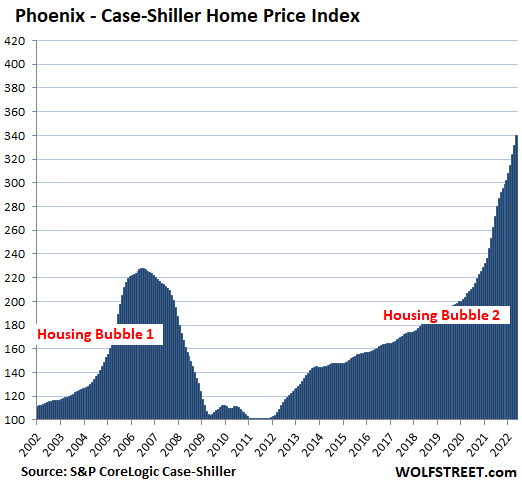 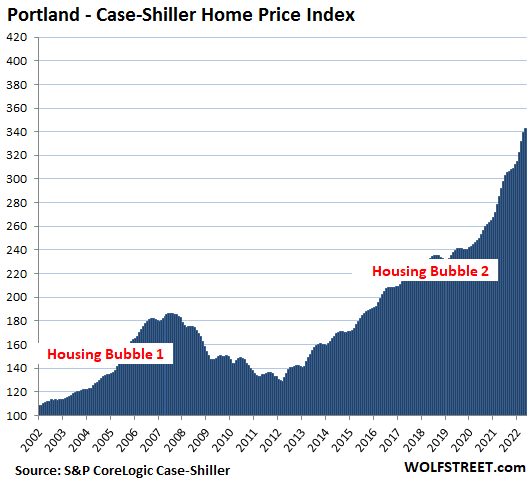 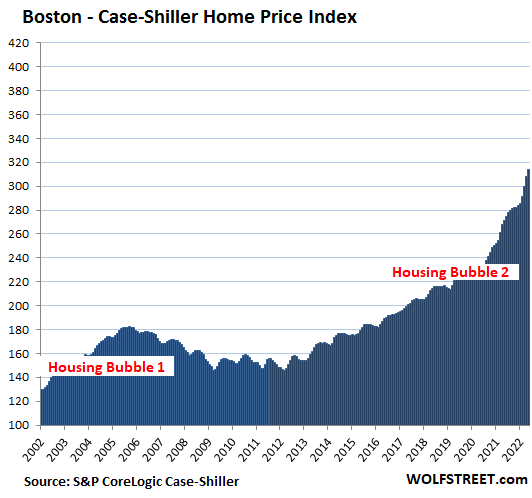 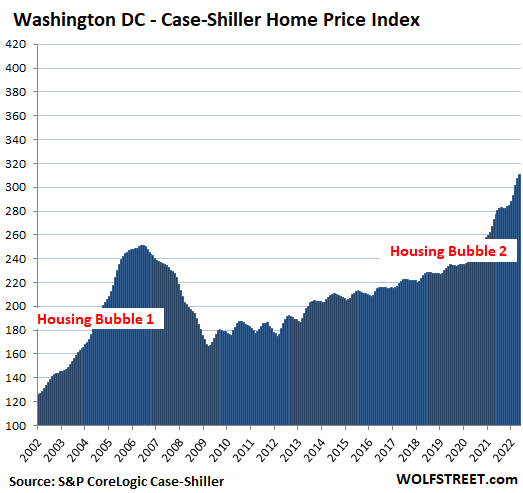 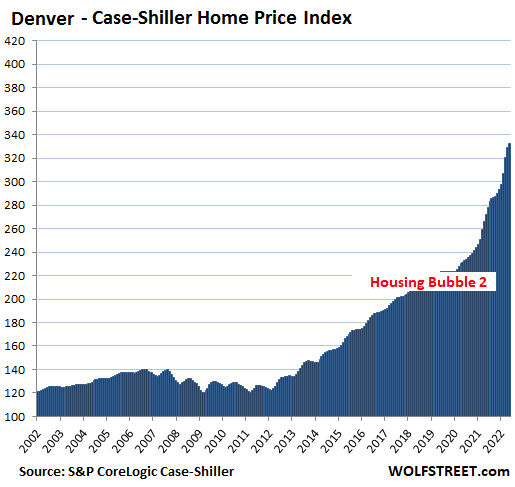 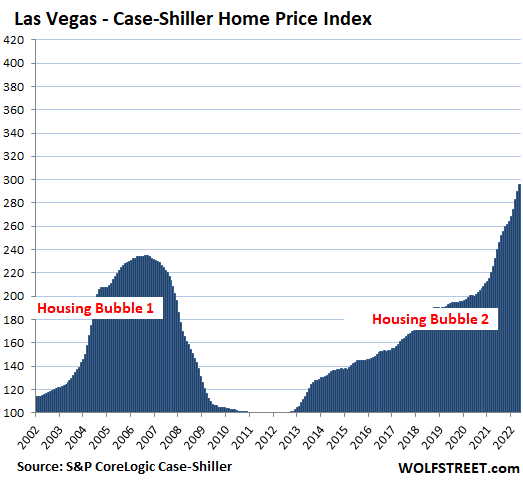 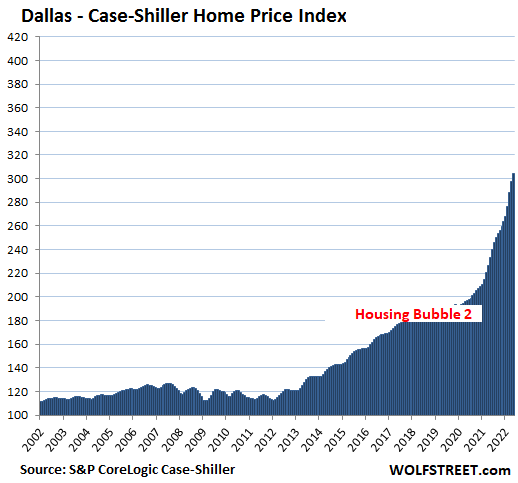 New York metro, the vast market within commuting distance to New York City: +1.6% for the month, down from +2.0% in April. Year-over-year, the index gained 14.5%, roughly the same as in April.

With its index value of 272, the New York metro has experienced 172% house price inflation since January 2000. The remaining cities in the 20-City Case-Shiller Index (Chicago, Charlotte, Minneapolis, Atlanta, Detroit, and Cleveland) have had less house price inflation and don’t qualify for this illustrious list. 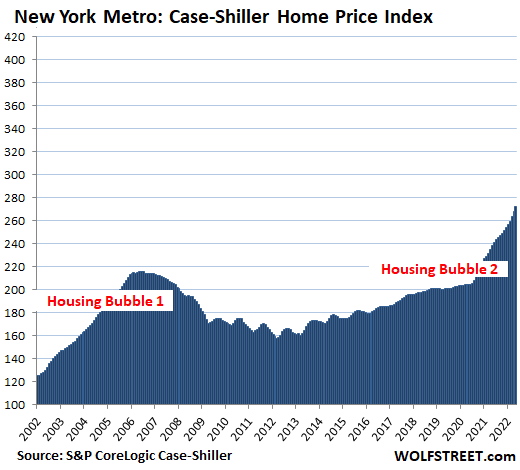 110 comments for “The Most Splendid Housing Bubbles in America, July Update: Whittling Down the Crazy Price Spikes”