Reverse stock splits keep them from getting delisted. But some didn’t even get that far and filed for bankruptcy, like, WOW that was fast.

Hippo Holdings – one of the “insurance tech” unicorns that went public via merger with a SPAC and whose shares then collapsed – announced on July 20 in a proxy statement that it would hold a special shareholder meeting on August 31 via live webcast to get shareholder approval for a reverse stock split “in the range of 1-for-20 to 1-for-30.”

On July 19, Hippo disclosed that it had received a delisting notice from the New York Stock Exchange because the share price had been below $1 for over 30 trading days in a row. And to get the share price up above the delisting line, the company said it would undertake a reverse stock.

This is Hippo’s stock [HIPO] since the announcement of the merger with a SPAC in March 2021. The merger at a “valuation” of $5 billion was approved by shareholder on August 2, 2021. Less than a year later, there’s the reverse stock split. Shares closed at $0.80 today, down 93%, and the whole thing has been a giant hype-and-hoopla horror show at the tail end of the craziest stock market bubble ever, as documented in my column, Imploded Stocks (data via YCharts). 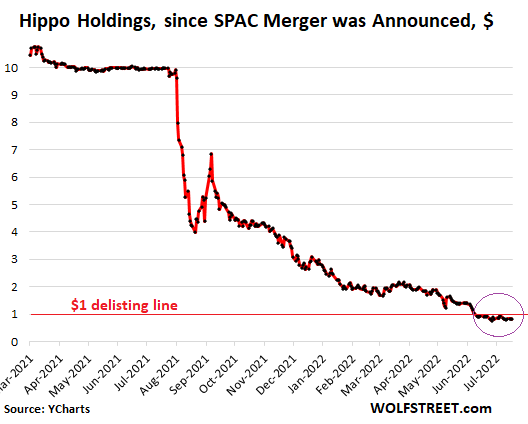 If Hippo undertakes a 1-for-20 reverse stock split, shareholders of record as of July 18 will see their shareholdings cut by 20. If I have 1,000 shares of Hippo before the reverse stock split, I will have 50 shares afterwards. And the shares, instead of being worth $0.80, will be worth for a moment 20 times as much, $16. In dollar terms, I come out even for a moment.

The thing that happens afterward in the market, as we’ve learned during the dotcom bust, is that shares often continue to sink because now there is a lot more room underneath them to sink. But at least, it staves off delisting for a while.

If the company cannot figure out how to get cash-flow positive, and if it therefore continues to burn cash, it will need to get new funds that it can incinerate, and that’s very tough in the current climate. Or maybe another company will buy it for scraps.

If those two options don’t materialize, then one day, after all the cash has gotten burned, the company vanishes, and a good time was had by all during the party, except those investors that ended up holding the barf bag.

That $1 delisting threat is hanging over a lot of companies that have gone public recently via merger with a SPAC or via IPO. And there are going to be a lot of disclosures of delisting notices, and a lot of announcements of reverse stock splits – if the companies even make it that far. And many won’t and will file for bankruptcy instead. And some already have.

Enjoy Technology [ENJY], a delivery startup with an extra-fancy website, is one of the ones that didn’t even make it to a reverse stock split. It went public via a SPAC in October 2021 and then went to heck in nearly a straight line – practically violating the WOLF STREET dictum that “Nothing goes to heck in a straight line.”

On June 17, it disclosed that it received a delisting notice. On June 30, it disclosed that it filed for bankruptcy. By now, the stock is a goner, has already been delisted, and trades over the counter at $0.12. It will eventually go to zero, and the end users will have to ask their brokers to remove the shares from their account if they get tired of looking at them after a few years (data via YCharts). 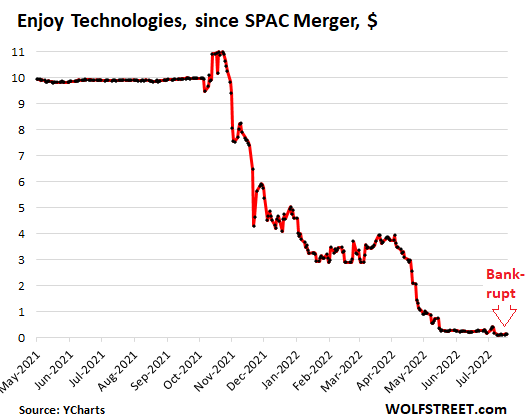 Electric Last Mile (EV conversions) never made it to a reverse stock split either; it filed for bankruptcy in June, one year after its SPAC merger, and the stock is a goner, now at $0.12 over the counter, and will go to zero (data via YCharts): 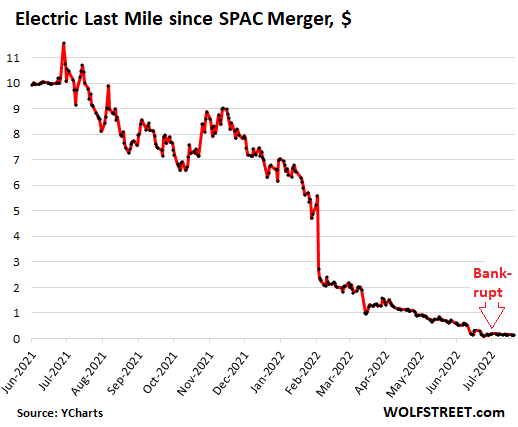 Voyager Digital (crypto platform), which IPO’ed last year with the main listing in Canada, never made it to a reverse stock split either. On July 6, it filed for bankruptcy in the US after it froze the deposits of its customers.

SoFi Technologies [SOFI] last week already obtained approval from shareholders for an eventual reverse stock split, if the company decides to go that route. The company started out as a student-loan operator and stock trading platform, and then got into crypto trading. In early 2021, it merged with one of Chamath Palihapitiya’s SPACs. The shares had peaked at $28.26 in February 2021, which gave it a market cap of around $25 billion. Since then, shares have plunged 75% to $6.97. And $18 billion in market cap have vanished. In Q1, the company lost $115 million, but shares remain well above the delisting line for now.

Metromile [MILE], another insurance tech AI unicorn SPAC that lost a ton of money, this one specialized in auto loans, is a good candidate for a delisting notice and reverse stock split. It currently trades at $1.05 and has traded as low as $0.75. If it trades below $1 for 30 days, get ready (data via YCharts): 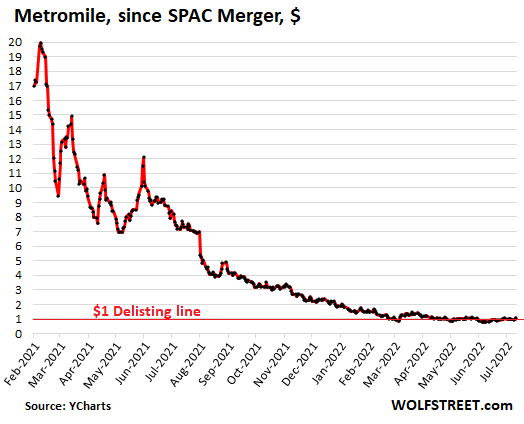 Among our other Imploded Stocks, the SPAC and IPO heroes that have dropped at least temporarily near or below $1 are:

143 comments for “It Starts: Reverse Stock Splits for Collapsed SPACs & IPO Stocks. Bankruptcy for Others”