From SPAC merger to Chapter 7 bankruptcy in 12 months. That was fast! Congratulations on the speed and on being first!

Electric Last Mile Solutions, an EV startup that went public in June 2021 via merger with a SPAC, was featured on May 30 in my article on EV SPACs and IPOs that are already announcing that they’re running out of cash. At the time, the company said that its cash would last only “into June.”

I wrote – because you just have to keep your sense of humor about these shenanigans – that “Electric Last Mile has the unique opportunity to be the first EV SPAC in this cycle to go to zero because its cash-burn machine ran out of cash. No hard feelings, folks, this is just how the game is being played during bubbles, and someone always gets to hold the bag.”

OK, so now, we’re “into June,” and here comes the SEC filing about the company’s decision to file for Chapter 7 bankruptcy. Chapter 7 covers liquidation, not restructuring. It’s the end. Meaning the company’s assets, if any, get sold to the highest bidder, and the lawyers and some creditors will get the proceeds, if any, and the stockholders will get to hold the bag and get nothing. So the company said in the SEC filing:

“Following the commencement of the Chapter 7 Case, a Chapter 7 trustee will be appointed by the Bankruptcy Court to administer the Company’s estate and to perform the duties set forth in Section 704 of the Code.” 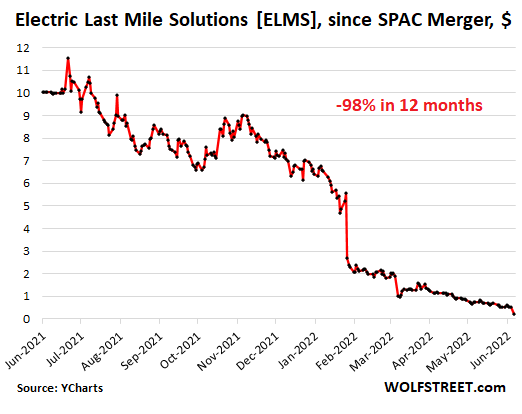 That stock will be delisted from the Nasdaq and then will trade over the counter where some jockeys are going to bounce it back and forth for a while, to then be abandoned and die. The ultimate shareholders – all the outstanding shares are always held by whoever, and these whoevers end up with worthless shares in their brokerage account that they cannot sell and will have to look at for years to come, unless they contact their broker and ask them to remove the shares manually.

So this is the first of many stocks in my Imploded Stocks column that will die. From SPAC merger to Chapter 7 bankruptcy in 12 months. That was fast! Congratulations on the speed and on being first!

The company, which was working on urban delivery vehicles, has failed to file its 10-K annual report with the SEC, and it has failed to file its 10-Q quarterly report with the SEC. The company’s auditors walked away in February. This was also when CEO James Taylor and Chairman Jason Luo, both co-founders, were forced out after an internal probe. And it’s under investigation by the SEC.

This is a mess even for class-action lawyers because now they cannot fish for a settlement with the company to pay their fees, but will have to fight for scraps in bankruptcy court. And good luck with that.

I doubt that anyone on Wall Street – or any of the celebrities that promoted all kinds of SPACs – will go to jail over these pump-and-dump collapses. That’s just not how it happens. But people are getting sued, even celebrities. And lots of people will end up losing lots of money. And lots of other companies will follow Electric Last Mile into bankruptcy court as their shares go to zero, and as the majestic Everything Bubble unwinds.