Folks looking for yield have options now. Won’t beat inflation, but won’t get their face ripped off either.

Amid hair-raising market “volatility” this morning, double-digit bloodletting in cryptos, and a steep sell-off in stocks that surely will bring out the dip buyers soon to prove once again that markets are far from the bottom, Treasury securities are selling off, and yields are spiking, on top of Friday’s yield spike, following the CPI report that had crushed the false hopes of peak inflation.

The two-year Treasury yield, which had spiked by 23 basis points on Friday, spiked by another 14 basis points so far today, to 3.20%, the highest since November 2007, when yields plunged as the Financial Crisis was cracking the slick surface. But now is the opposite crisis: Inflation that is threatening to run away, with CPI inflation having reached 8.6% in May, and anything yielding less than that is getting eaten up by it. 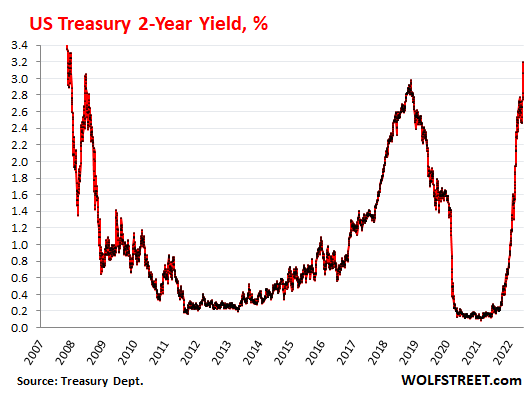 The one-year yield, after spiking 23 basis points on Friday, spiked another 26 basis points so far today, to 2.77%, the highest since January 2008: 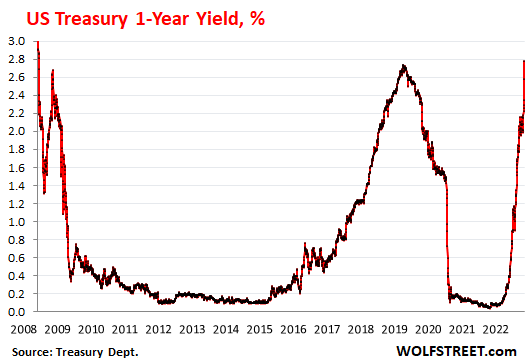 The short-term yields are reacting more directly to the expected rate hikes by the Fed over the next few months. But there has been some reaction at the longer end as well.

The Fed locks down the very short end of the Treasury yields via its policy rates, including the rate it charges for overnight repos (1%) and the rate it pays on overnight reverse repos (0.8%), which box in the overnight yields in the gigantic repo market. Both those rates will be raised by at least 50 basis points on Wednesday.

The Fed has been manipulating down the longer end of the Treasury yields by having been the single biggest and most relentless buyer of Treasury securities during QE. QE was designed to push down long-term yields, and it did that. Now QE ended, and QT is setting in gradually in June, and long-term yields have risen, but not nearly enough.

As QT picks up, with the single biggest and most relentless Treasury buyer now reducing its holdings, it will allow long-term yields to rise. Those yields should be well above the rate of inflation and have a long way to go. 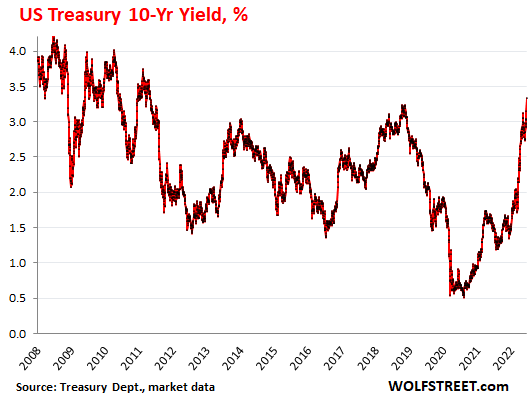 Yields go up and yields go down, which is what makes a market, and when the 10-year yield went down below 3% for a little while in May, the tightening deniers came out in droves and said that this was proof of the impending rate cuts by the Fed, and that the peak of inflation had already occurred, and that inflation was winding down, and that the Fed would restart QE all over again. It sounded silly then, and it sounds silly now.

When yields rise, it means that prices of those bonds fall, and prices fall the hardest of bonds with the longest remaining maturities.

And it’s a massacre for people who invested in long-term bond funds, such as the iShares 20+ Year Treasury Bond ETF [TLT], which tracks an index of Treasury securities with at least 20 years of remaining maturities. It dropped another 2.7% this morning, to $110.66 at the moment. It is down 23% year-to-date, and has plunged by 35% from the peak in August 2020, which marked the moment the greatest bond-market bubble in US history began to implode. It’s back where it had been in April 2014, and where it had first been in November 2008.

The TLT bond fund has been a high-risk bet that long-term Treasury yields will always go down forever, conceived during the greatest bond bubble ever. It was a high-risk bet on long-term interest rates, and this high-risk bet was sold to unsuspecting investors as a conservative and prudent investment in Treasury securities.

If you want to invest in long-term Treasury securities, unless you’re a speculator, buy them at auction with the intent to hold them to maturity, and you won’t face this kind of Wall Street-engineered disaster (data via YCharts): 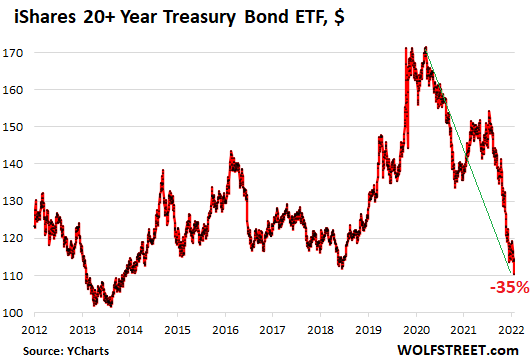 It’s not a massacre for yield-investors who buy at auction short-term Treasury bills and Treasury notes with maturities at the shorter end, and hold them to maturity. Yields have been surging, which means that the securities are becoming less disgusting, by offering more income to those who buy them at the new higher yields. And people who bought at auction earlier will get the yields they locked in at purchase, and when the bond matures, they’ll get their money back. No drama there.

And for CD investors, it now pays to shop around: Brokers are once again offering “brokered CDs” with one-year yields over 2% and longer yields over 3%. “Brokered CDs” are regular bank CDs that these banks offer through brokers to get new funds from new customers, though they might not offer them to their existing customers.

Folks looking for yield that blows away the interest that bank accounts are paying, and that blows past the dividend yield of the S&P 500, they have some options now, and they will have better options coming up as yields rise. They won’t be able to beat inflation, but at least they don’t get their face ripped off.