Electric Last Mile said it might only make it “into June.” So far in this cycle, 25 SPACs have warned they might not make it, including 6 EV SPACs.

Electric Last Mile Solutions, an EV startup that went public in June 2021 via merger with a SPAC, disclosed Friday, May 27, afterhours – when everyone was already off for the long Memorial Day Weekend – that it wouldn’t run out of money sometime between July and September, as it had disclosed two months ago, but instead it would run out sometime in June – that its cash wouldn’t even last through June, but only “into June.”

Somehow, the company has to find new investors, like right this moment, or else it’s going to shut down in a few weeks. In its filing with the SEC on Friday, it said:

“The Company expects that, without obtaining additional financing, it has sufficient cash to continue operations into June 2022.

“The Company’s current projections reflect, among other things, increases in professional service fees, employee retention costs and payments to suppliers.

“The Company is actively pursuing potential sources of liquidity and is working to extend its cash runway during this process to the extent possible.”

On May 24, the company disclosed in a filing with the SEC that its quarterly report for Q1 (the 10-Q filing with the SEC) would be delayed further. It said it still hadn’t filed its required annual report (10-K filing) for 2021. It said that on May 18, it had received a delisting notification from the Nasdaq due to noncompliance with the filling requirements.

“The Company’s management is working diligently to complete the Form 10-Q, as well as the Form 10-K, and intends to file as soon as practicable. However, the Company does not expect to file the Form 10-Q within the timeframe specified by Rule 12b-25 for the reasons discussed in the 10-Q Notification,” the company said in the May 24 filing.

Electric Last Mile is under investigation by the SEC. Its auditors threw in the towel in February, and the company has not been able to hire a new auditing firm and has therefore no auditors to audit the financial reports that it hasn’t filed yet. In addition, the company needs to restate some of the quarterly reports that it did file earlier.

In February, CEO James Taylor and Chairman Jason Luo, both co-founders, were forced out, effective on the spot, after an internal probe into share purchases that they’d made just before the company announced that it would go public via merger with a SAPC in December 2020.

For investors, this is like, OK, it was fun while it lasted, but now the money is gone. Before the announcement on Friday evening, shares [ELMS] closed at $0.71, down 94% from the high in June 2021: 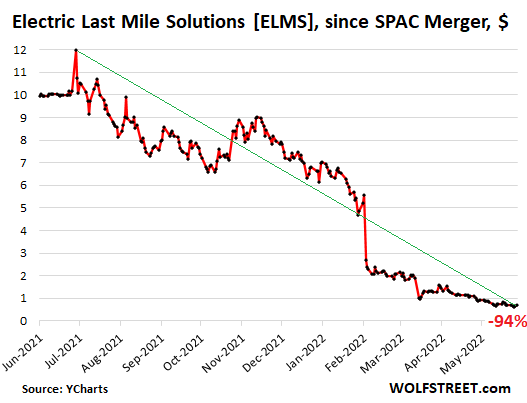 I mean, you cannot make this stuff up.

It takes a huge amount of talent to produce a shitshow like this – excuse the technical jargon. But during the biggest bubble ever that is now imploding, anything would go, and the stock jockeys eagerly played along with it because it was so much fun.

This mess would be funny as heck, if it weren’t so serious – serious not because this will likely be the first SPAC of many in this cycle to go to zero, and it’s already nearly there, but serious because it shows all the utter garbage that was sold by Wall Street with huge hype and hoopla, for huge amounts of money, to the public to make Wall Street and some insiders immensely rich.

Electric Last Mile has the unique opportunity to be the first EV SPAC in this cycle to go to zero because its cash-burn machine ran out of cash. No hard feelings, folks, this is just how the game is being played during bubbles, and someone always gets to hold the bag.

EV startup Canoo [GOEV], which went public via merger with a SPAC in December 2020, said in its Q1 earnings report, that it might not have enough cash to continue operating. It said that “there is substantial doubt about the Company’s ability to continue as a going concern.”

It’s not helpful that the company is currently under an SEC investigation, as it disclosed in an SEC filing, concerning its merger with the SPAC and its “operations, business model, revenues, revenue strategy, customer agreements, earnings and other related topics, along with the recent departures of certain of the Company’s officers.” Class-action lawyers are having a field day with this show.

Numerous executives have left the company, including co-founders, the CEO, the CFO, and the Operations Officer. It still doesn’t have a CFO, but only an “interim CFO.”

Canoo had $105 million of unrestricted cash on its balance sheet at the end of March. Per its guidance, it plans to burn about $200 million in Q2, and it has no revenues. If it is able to raise $600 million pronto, it would extend the runway for another three quarters, through the end of 2022 and maybe into 2023, and then that $600 million would be gone, and there still wouldn’t be any revenues to speak of.

The company doesn’t have anything close to a production-ready product, it had $0 revenues in Q1, while booking a loss of $125 million. The company would need billions of dollars from investors – not a few hundred million – to get to where it’s able to generate enough revenues to cover its operating costs, which will take years, if it can ever sell enough vehicles that it can’t even build yet.

But its shares have collapsed by 84% from their high, to $3.52, and raising these billions of dollars isn’t going to happen by selling collapsed shares. 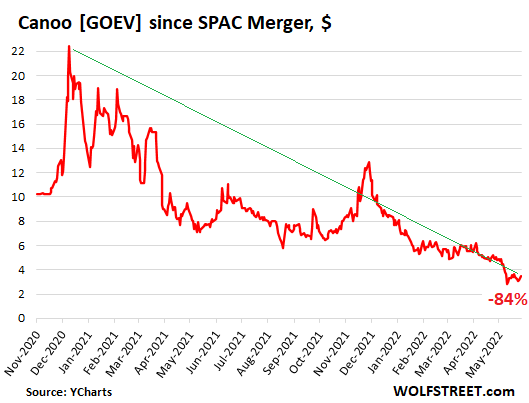 Lordstown Motors [RIDE], which went public via merger with a SPAC in October 2020, also included the “going concern” warning in its filing with the SEC, and its shareholders have gotten shookalacked, with the stock down 94% from the high in February 2021. 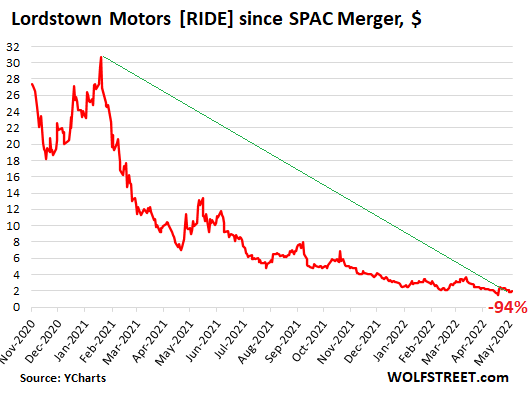 Electric Last Mile and Canoo are among at least 25 other SPACs that have issued “going concern” warnings so far in this cycle, according to Audit Analytics, cited by the Wall Street Journal. During this cycle, 232 companies went public via mergers with SPACs. And at least 25 of them have issued warnings recently about running out of cash and not being able to make it as a “going concern.”

At least six EV SPACS have issued going concern warnings since 2021. And EV battery makers have joined the group.

They include some of my favorite Imploded Stocks. These SPACs already brutalized their investors, and they are going to brutalize them further. And it’s just the beginning. During the dotcom bust, which took over two years to sort all this out, countless startups ran out of cash and died and their stocks went to zero or they were acquired for nearly nothing.

173 comments for “EV SPACs Warn about Running Out of Cash: The Beginning of the End for the Craziest Stock Bubble Ever”