The top 10 brands in Russia and their struggles.

New vehicle sales have been a mess in all countries for the past two years – in the US, they were down 25% in June compared to June 2019 – hampered by supply issues, semiconductor shortages, and various lockdowns, including the lockdowns in Shanghai that are further messing up supply chains. For some European automakers, Russia’s invasion and bombing of the Ukraine disrupted the flow of components from the Ukraine.

But new vehicle sales in Russia are in a category of their own, in terms of how far they collapsed and what chaos they face. 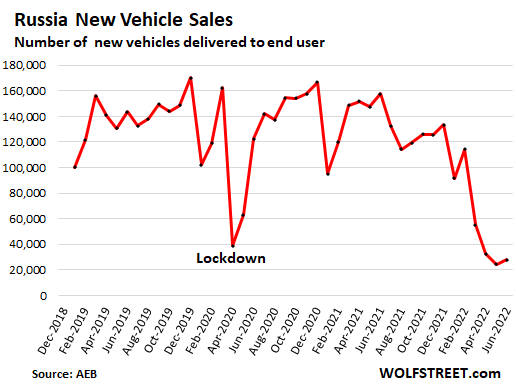 The top 10 brands in Russia.

Based on their 2021 sales volume, these are the top 10 brands in Russia, along with the number of vehicles they sold in June 2022, and the percent decline from June 2021:

Automakers in Russia are dependent on imported components, particularly those involving electronics, and the flow of those components, already stressed for the entire industry globally, was thrown into utter chaos due to the sanctions.

AvtoVaz, which owns Lada, is Russia’s largest automaker. It is majority-owned by Alliance Rostec Auto BV, which in turn is owned by the Renault and the Russian company Rostec. The company also makes Russian versions of models from Renault and Nissan.

Renault said in May that it would sell its 69% stake in AvtoVaz and its factory in Moscow to the Russian government. The deal included an option to buy back its stake over the next six years. Terms were not disclosed, but Trade and Industry Minister Denis Manturov indicated that the deal could be conducted for a symbolic one ruble, according to the AP, citing Russian media reports.

Renault CEO Luca de Meo said at the time that “we are making a responsible choice towards our 45,000 employees in Russia, while preserving the Group’s performance and our ability to return to the country in the future, in a different context.”

AvtoVaz said earlier this year that it would produce only Lada models with less foreign content and forget about airbags, electric power steering systems, and antilock brakes. It halted production in late April and in May due to component shortages, but resumed production on June 8 of the Lada Granta.

But this Granta would be a stripped-down version with fewer imported components. It is “the most affordable new car on the Russian market,” the company said, according to Tass. “The model was developed for the purpose of providing as much vehicle localization as possible, excluding the effect of imported components’ shortage.”

Kia and Hyundai said in April that they would continue assembling vehicles at their plants in Russia. But they halted assembly operations because of component shortages, particularly electronic components. At the end of May, they resumed production, but at a much smaller volume and with parts missing and with unfinished vehicles piling up, waiting for the components to show up.

Volkswagen, owner of VW and Skoda, among others, said in March that it halted production until further notice at its Kaluga plant, which it owns, and at the Nizhny Novgorod plant, which is owned by GAZ Group, which assembles some VW models under contract. At the time, Volkswagen also said that it would halt exports of vehicles to Russia.

Nissan shut down production at its plant in St. Petersburg in March. In May, it disclosed that it had written off its ¥52.6 billion investment ($500 million) in Russia. At the end of June, it extended its production halt for another six months.

Haval, a Chinese automaker, which makes several models at its plant in the Tula region, said in April that it would continue producing vehicles in Russia. It’s struggling with the same supply issues all automakers are, and sales have plunged by 53%, but that was less than the collapse among other brands, and it more than doubled its market share to 5.9%. Other Chinese automakers are now also eying the Russian market.

US automakers left in 2019 mostly…

GM exited production in Russia in 2019 when it sold its 50% stake in a joint venture to its partner AvtoVaz. The venture had produced vehicles under the Chevrolet brand. From that point on, GM only exported a small number of vehicles to Russia, which it now halted.

Ford, also in 2019, shut down passenger vehicle production at Ford Sollers, a joint venture in Russia. Ford Sollers, of which Ford holds only a minority stake, then only produced Ford-branded commercial vans. In March, it suspended production of the vans.