Crypto-trading platform Coinbase hired Goldman Sachs in late 2020 as financial advisor for its efforts to go public. They decided eventually to go public via a direct listing. Coinbase was hyped to the nth degree by Wall Street and by the whole crypto pump-and-dump club. Goldman Sachs became the first-listed of the joint-managers of the direct listing, followed by J.P. Morgan, Allen & Co., and Citigroup. Goldman collected huge fees for its efforts. On April 14, 2021, Coinbase shares [COIN] started trading at $381 a share then spiked to $429.54 intraday, and closed at $328.28, giving it a market cap of about $88 billion.

Over the 16 months since that propitious intraday high, Coinbase shares have collapsed by 87%, to $56.40 at the moment. And today, after stock jockeys and dip buyers had taken huge losses in their Coinbase shares, Goldman Sachs cut its own creature to “sell” and cut its price target to $45. And shares dropped about 10% by mid-day today.

A chart that looks like this – and my Imploded Stocks column is full of them – is an indictment of the Wall Street banks and the hype-and-hoopla machine that pumped and dumped no matter what into the laps of the most gullible retail investors ever, chasing after the most fabulous get-rich-quick schemes ever. It takes two to tango. The 10% plunge today is barely visible after this utter collapse: 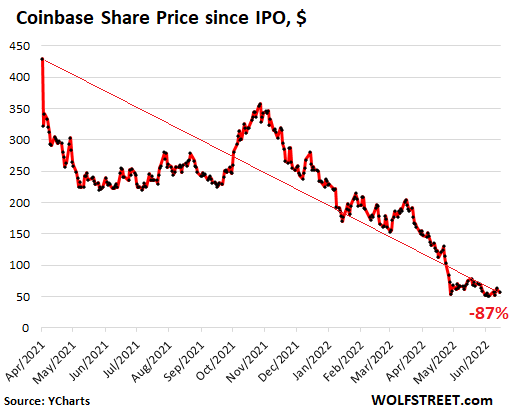 On June 14, following the hiring freeze announced on June 5 and reports of rescinded job offers, Coinbase announced that it would lay off 18% of its workforce. Which was easy to do since the company switched to working-from-home during the pandemic in May 2020 – it became what it called a “remote-first” company – which was made permanent in 2021. And 1,100 laid-off people found out via personal email, after they’d been locked out from their corporate emails and other access. So that was easy.

These layoffs followed the debacle of the disclosure in an SEC filing that crypto holders on its platform were just “unsecured creditors,” made worse by CEO Brian Armstrong’s tweet storm  which promised that “We have no risk of bankruptcy,” which inspired huge amounts of confidence.

All this came with an earnings report that was a total fiasco, including a loss of $430 million in Q1, a 35% plunge in revenues, and a drop in monthly users. And it said at the time that revenues and users would continue to drop.

So today, Goldman Sachs comes out and issues a sell rating on its own creature and cuts its price target to $45, after most stock jockeys that ever touched it got their faces ripped off. Analyst William Nance blamed the “continued downdraft in crypto prices” – you know, the collapsing gambling tokens – and the drop in activity across the crypto space.

“We believe Coinbase will need to make substantial reductions in its cost base in order to stem the resulting cash burn as retail trading activity dries up,” Nance wrote in a report to clients.

So, this means more layoffs, on top of the people that have already been cut.

“We believe current crypto asset levels and trading volumes imply further degradation in COIN’s revenue base,” with revenues now expected to drop by 61% in 2022, Nance wrote. Hence the need to cut costs further by cutting headcount.

The issue for Coinbase is that it’s not fun anymore to trade crypto gambling tokens. It used to be a huge amount of fun when prices soared, spiked, and exploded on an hourly basis. But now that prices kathoomphed, in terms of the hated, disparaged, and soon to collapse fiat, some of them by nearly 100%, thereby wiping out about $2 trillion of the $3 trillion in gambling token value, the fun has turned into a nightmare. Many traders who were leveraged in their positions got wiped out and were left by the wayside. And Coinbase, which makes its revenues from fees off trading activity, is confronted with the unpleasant issue that its revenues drying up.

218 comments for “Goldman Sachs Cut its Hype-and-Hoopla Creature Coinbase to Sell after it Collapsed 87%, as Crypto “Trading Activity Dries Up””