You’re just “unsecured creditors” if we file for bankruptcy. But hey, CEO tweets: “We have no risk of bankruptcy.”

Crypto exchange Coinbase Global not only rattled its already tortured shareholders when it reported horrific results afterhours on May 10, but also its crypto holders, when it added new language to its quarterly filing with the SEC, explaining what could happen to their cryptos at Coinbase if it files for bankruptcy.

In the same breath, it filed a shelf registration with the SEC to raise more money by selling shares, whose collapse has made selling more shares to raise money much more precarious.

Then Wednesday afternoon, the whole situation was made worse, amid general mayhem in the crypto markets, when the CEO came out with a tweet storm and said among other things, “We have no risk of bankruptcy.” Oopsiespalooza.

Shares of Coinbase [COIN] kathoomphed 26.4% during regular trading today and another 3.2% in afterhours trading to $52.01, down 88% from its intraday peak on April 14, 2021, thereby earning itself a prominent spot in my column, Imploded Stocks.

April 14, 2021, the day the shares peaked, was of course when Coinbase went public in a mega-hype-and-hoopla direct listing at $381 a share. The share price then spiked to $429.54 intraday and closed that day at $328.28, giving the company an inexplicable market cap of about $88 billion.

Well, let me retract that. The market cap was very explicable because these were the craziest times ever, and every bit of hype and hoopla was eagerly absorbed amid the craziest bout of consensual hallucination ever that by far outdid the dotcom bubble.

And these folks got literally thackamuffled to the point where the huge percentage thunkadunk today shows up on this chart as just another step in the stairway to heck: 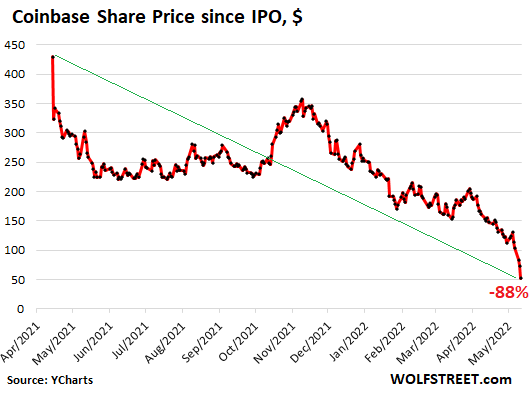 Coinbase reported a loss of $429.7 million for Q1. We’ve gotten used to these kinds of horrifying numbers by now. Coinbase is following in the footsteps of a lot of startups where management somehow believes that bigger losses are better losses.

Revenues – most of which it generates through transaction fees – plunged by 35% to $1.2 billion. Both the loss and the plunge in revenues were a lot worse than analysts had expected.

Turns out, cryptos aren’t fun anymore. They’re money-sucks – I mean fiat-sucks. Prices are plunging. Bitcoin is now at $27,144, down 60% from the peak in November. How the heck are you supposed to have fun trading, when you get powwoozzled on a daily basis? But Coinbase needs people to trade so that it can extract its fees.

You’re just “unsecured creditors” if we file for bankruptcy.

Then folks started reading the new language in the 10-Q that Coinbase filed with the SEC. It said that if Coinbase files for bankruptcy, while it has your beloved change-the-world cryptos in custody, you and all the others could be treated as “unsecured creditors.”

The new language is in the middle of other delectable morsels and says this:

But hey, “We have no risk of bankruptcy.”

That language caused enough of an uproar that CEO Brian Armstrong decided to do some damage control on Wednesday. In a series of tweets, he tried to soothe the nerves of Coinbase’s users, and extended his “deepest apologies” to them for not including this language sooner, and communicating the inclusion better to the users. He said among other things:

“We have no risk of bankruptcy, however we included a new risk factor based on an SEC requirement called SAB 121, which is a newly required disclosure for public companies that hold crypto assets for third parties.”

This comes amid chaos in the crypto market. Big names are shookalacking. And stablecoins, which are supposed to maintain a value of $1, are becoming unstable. TerraUSD started careening off its $1 range on Monday and promptly kathoomphed to 30 cents, before bouncing, then relapsing, then bouncing, and relapsing again. At the moment, it’s at 60 cents.