The crazy stimulus-fueled binge on goods in the US has been fading, as consumers are switching back to spending more money on discretionary services, where spending had collapsed during the pandemic, ranging from air fares to healthcare services. And there are still shortages of all kinds, preventing consumers and businesses from buying what they want, delaying construction projects, and forcing production cutbacks at manufacturing plants.

Ocean shipping is still in chaos, with container ships and containers hung up in various parts of the world. Finding containers to ship merchandise from the West Coast to Asia can be a nightmare. Portions of China, particularly Shanghai, that are critical for supplying the US with goods and components have been locked down, and shipments from there to the US have been seriously impacted. And pricing chaos reigns everywhere.

There are capacity constraints at US trucking companies and railroads. Inefficiencies due to the chaos have slowed everything down further.

Top this off with spiking prices for diesel, which this week hit a new record, and it creates a complex and very murky situation for transportation in the US.

Truck makers are “carefully monitoring their backlogs and continuing to evaluate monthly how far into the future they are willing to push them,” FTR said in its note.

“As production continues to be significantly impacted by supply chain disruptions, component shortages, labor shortages, and increased material costs, the hesitancy to open 2023 order boards stems from not being able to guarantee pricing given the current environment,” FTR said.

“Once supply chain issues improve, OEMs will be able to substantially increase orders. But until then, conditions remain stagnant,” FTR said.

Orders for Class 8 trucks in April, at 15,400 orders, were down 56% year-over-year, according to data from FTR. The drop in orders reflects “a market that is trying to minimize its exposure to the headwinds it could potentially face in 2023,” FTR said. 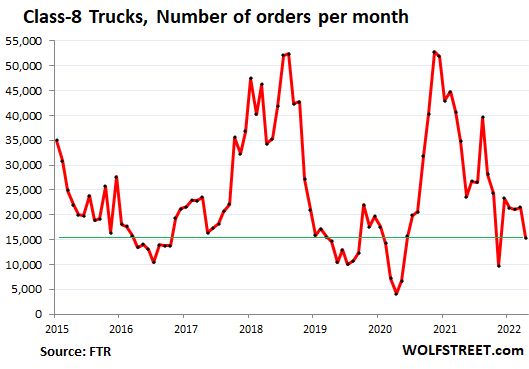 The situation that heavy truck makers face is symptomatic for what is going on in this economy. There is still a lot of demand and limited capacity to fill that demand as these manufacturers are having trouble getting their parts and components, and they’re hampered by labor shortages. And chaos on the cost-side makes it risky to lock in prices for orders that cannot be produced for a while.

And these constraints are showing up in shipment volume, which has dropped from prior years, as we’ll see in a moment.

In addition, there is increasing uncertainty about demand in the future. Demand from consumers for goods has started to come off the stimulus-fueled spike, though it still remains above trend. Demand from industrial customers for transportation services is constrained by the supply chain chaos and the resulting limits on production.

The index covers all modes of transportation but is concentrated on trucking, with truckload shipments representing over half of the billings, rail in second place, less-than-truckload shipments in third place, followed by parcel services and others. It does not track shipments of bulk commodities. 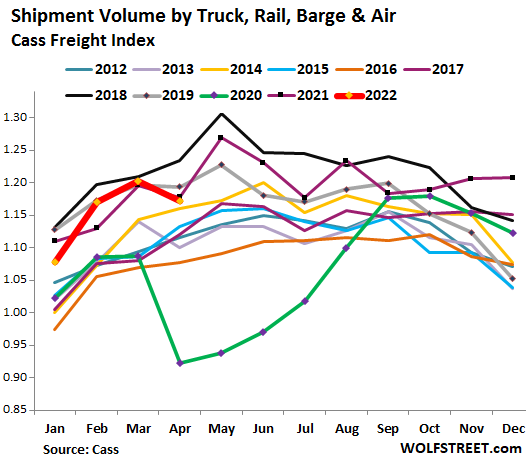 The combination of high demand, capacity constraints at transportation companies, and spiking fuel prices shows up in the ballooning amounts that shippers in aggregate are paying to send goods to their customers.

The Cass Freight Index for Inferred Freight Rates, which includes fuel surcharges and shows the overall movement in the costs of shipping, started spiking a year ago, and in April was up by 31% year-over-year. Compared to April 2019, it was up 58%. 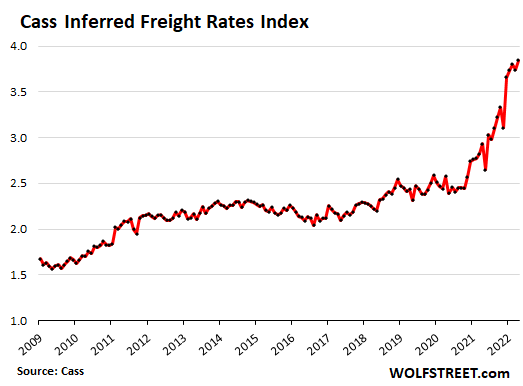 The average price at the pump of No. 2 highway diesel in the US spiked to a record $5.62 a gallon on Monday, according to the EIA. Year-over-year, the price of diesel has spiked by 76%! 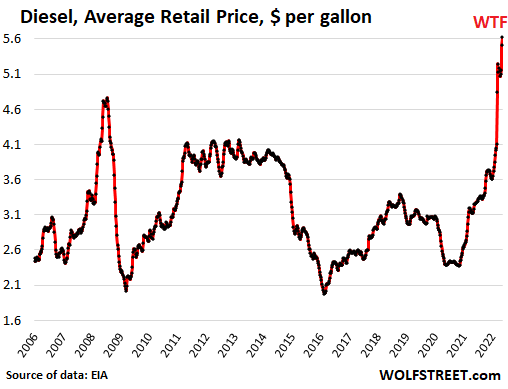 Expectations of a downshift in the freight cycle.

In February, the DAT’s Load-to-Truck ratio, which represents the number of loads posted for every truck on the DAT Load Boards, began declining, after the dizzying heights last year and the high in January of 9.3 loads for every truck. In March, the ratio was down to 4.6, and in April it fell to 3.4 loads per truck posted on the load boards.

Similarly, the Supply-Demand Balance in ACT Research’s for-hire survey got less tight earlier this year. In April, for the first time since June 2020, capacity to ship freight exceeded demand for shipping freight.

Similarly, average US spot rates for hauling van trailers, after rising to $3.10 per mile in January 2022, have declined, and in April dropped to $2.79 per mile, according to DAT.

Getting the transportation chaos sorted out, and having plenty of capacity to ship goods in the US, and perhaps even at flat or lower freight rates, would be a good thing for shippers, such as manufactures and retailers and their customers.

But given how cyclical the transportation business is, where capacity tends to materialize finally, just when demand is starting to slow, the trends of the past few months are “a sign for fleets to batten the hatches,” the report by Cass said. And these dynamics “strongly suggest” that freight rates might be coming off their dizzying spike.

56 comments for “Signs of a Downshift in the Freight Cycle, Trucking, and Demand”