This is now a common phenomenon with these Imploded Stocks.

The headlines were everywhere last night and today: “Robinhood Soars…” or Robinhood Stock Soars…” because it soared, currently by 25% or so from the close last night, on the news that a “crypto billionaire,” namely Sam Bankman-Fried, the  founder and CEO of crypto exchange FTX, bought 56.3 million shares of Robinhood [HOOD] for a 7.6% stake for about $648.3 million, according to Robinhood’s 13D filing with the SEC late yesterday.

He bought those shares during the selloff, paying an average of $11.52 a share. When the filing came out, it was seen by the market – whichever algo or person is trading HOOD – as a sign of approval from a “crypto billionaire.”

That’s fine and dandy. But the headlines made it seem like Robinhood rebounded in some huge way, when in fact, those 25% came off a very low stock price, and represent a very small amount of actual dollars. At the current price of $10.68, that 25% bounce amounts to $2.12 for a company that once traded at $85.00 and is now still down 87% from the high last August. And that huge surge in price is just another minor step in the uneven stairway to heck (data via YCharts). 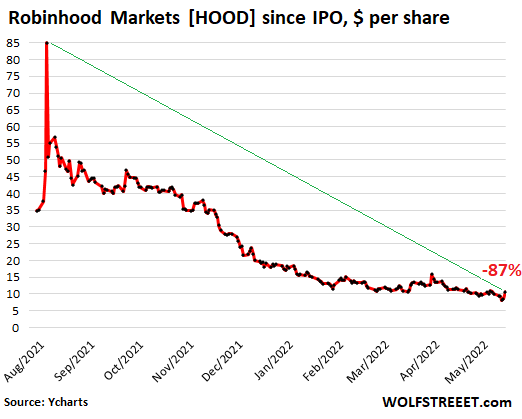 These kinds of things are now happening constantly to the Imploded Stocks. Some news comes out, or no news comes out, or an analyst that had been hyping the stock all the way down during the implosion comes out with a piece of how everyone is wrong, and the stock that has been crushed suddenly spikes by a huge percentage, such as 25% or 30% or even 50%. But when you look at a one-year chart, you can barely see that “spike” which is just another little step on the uneven stairway to heck.

This also happened to a bunch of other Imploded Stocks today, including Coinbase [COIN], when an analyst at Oppenheimer, who’d been touting Coinbase all the way down, came out and said everyone was wrong after the company’s shares kathoomphed further, following its disastrous earnings and outlook, a 10-Q disclosure of its account holders being “unsecured creditors” in a bankruptcy filing, and a subsequent tweet storm by its CEO that informed the frazzled account holders that “We have no risk of bankruptcy…”

So the Oppenheimer analyst that had been hyping Coinbase all the way down with an “outperform” rating and a $197 price target then came out yesterday, saying that the new language in the 10-Q filing and the CEO’s tweets are “grossly misunderstood and being taken out of context.” And WHOOSH goes the stock in percentage terms, from the closing price on Wednesday of $53.72, up by 36%, to $71.65 currently, but on the chart since its IPO in April last year, it was just another small step on the uneven stairway to heck (data via YCharts): 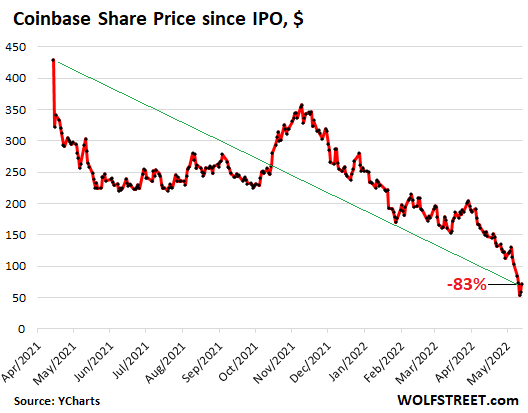 104 comments for “Huge Percentage Gains — “Robinhood Soars 25%,” “Coinbase Soars 35%.” But You Can Barely See it on the Stairway to Heck”