Wall Street is still trying to bleed retail investors. But they’re no longer all that eager to get bled.

In terms of my Imploded Stocks column, which has been getting longer and longer, this addition is special: When the tiny EV outfit Phoenix Motor went public on Wednesday, the shares [PEV] instantly kathoomphed into the void.

From the IPO price of $7.50 down to about $4.50 was just a void, and trading volume started below $4.50. Shares ended the first day of trading at $4.13, having plunged 46%. In early trading today, shares plunged another 10% and are currently a 3.66, down 51% from the IPO price yesterday. This is the chart by the minute of the now infamous first day: 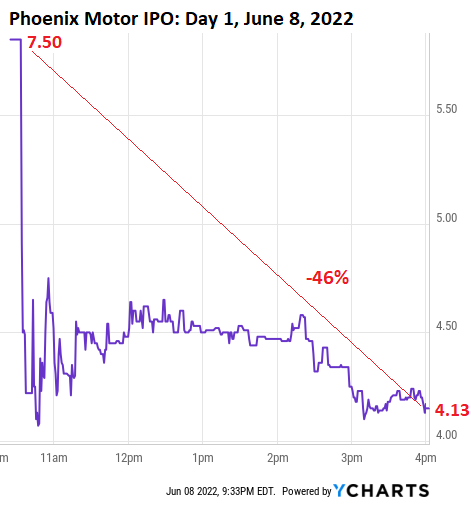 With this IPO, Phoenix raised just $17.75 million, giving it a valuation of $150 million. That $17.75 million it raised comes in handy because in its S-1 filing with the SEC, the company said that it had only $66,000 in cash left over at the end of March. Which explains the desperation of the IPO. Because that $66,000 has likely been burned up by now.

In the S-1 filing, the company said that it had only $2.9 million in revenue in 2021, which generated a loss of $14.6 million. So the funds it raised might give it enough cash to operate for a little over one year at the 2021 burn-rate.

Phoenix has been installing electric powertrain systems into utility vans, trucks, and shuttlebuses that are based on the Ford E-350 and E-450 cutaway chassis that were originally designed for internal combustion engines. A few shuttle buses are used at the LAX Wally Park parking complex. The company has been doing this for years. These are essentially after-thought conversions of ICE vehicles into EVs.

Converting a chassis designed as an ICE vehicle is the costliest way of building a mediocre after-thought EV. Legacy automakers and startups are working on blank-sheet commercial electric vans and trucks, and that’s the competition going forward.

Phoenix says in a filing with the SEC that it is now working on a “ground-up chassis,” meaning its own blank-sheet design of an EV chassis.

The owner of Phoenix is an entity of SPI Energy, which acquired Phoenix Motor in 2020. SPI is a Chinese company, headquartered in Shanghai. It installs solar panels, among other things. The Chinese company set up an entity in the US, which then went public in the US on January 19, 2016 [SPI].

In the morning of the first day of trading on January 19, 2020, amid huge hype and hoopla, SPI’s chairman Xiaofeng Peng and his management team rang the opening bell of the Nasdaq. And of course, it was the opening bell of a process by which American investors got fleeced.

Amid all the hype and hoopla by which Wall Street investment banks are trying to lure retail investors into handing over their money, the stock spiked to over $170 on the second day, its all-time high, and then collapsed 99%. Today in early trading, it’s at $2.34

So, now that the blistering EV IPO and SPAC boom has been in full collapse mode for over a year, with many EV IPO stocks and EV SPAC stocks down 80% and over 90%, SPI needed to start unloading Phoenix while it still could, and they needed investors to come up with that $17.75 million pronto – really a lot more, but that didn’t work out because investors refused — to keep the company going long enough for SPI to unload the rest of it, and they needed to get this company out the IPO window that has already closed.