And the Fed can see the budding Wage-Price Spiral too.

Employers added 436,000 workers to their payrolls in May, bringing the total number of employees to 151.7 million, according to the Bureau of Labor Statistics’ survey of employers today. Over the past three months, employers added 1.55 million employees. The recently announced hiring freezes and small-scale layoffs among tech and social media giants have not yet made any impression on overall payrolls across the economy. 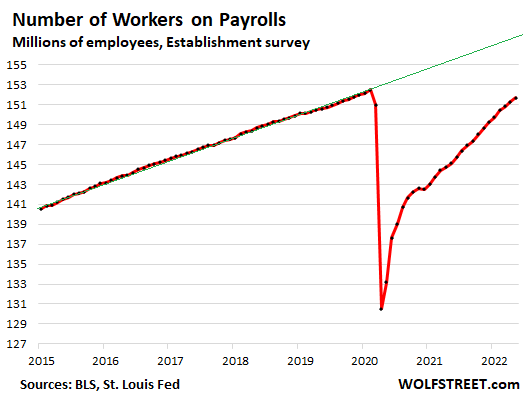 Households reported in a separate survey by the BLS today that the number of working people — including the self-employed and entrepreneurs that are not included in the employer data above — rose by 321,000 in May, largely undoing the dip in April, to 158.4 million. 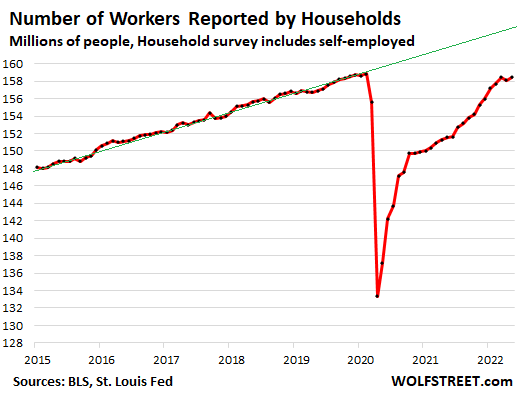 The labor force and labor shortage.

The labor force – the people who are working plus the people who are actively looking for work – jumped by 330,000, nearly reversing the entire decline in April, and at 164.38 million is just a tad below where it had been in March. It remains 207,000 people below February 2020 and far below the pre-pandemic trend. There are plenty of people in the US, it’s just that not enough of them, for whatever reasons, are actively chasing after a job in the rat race. And this has some big consequences. 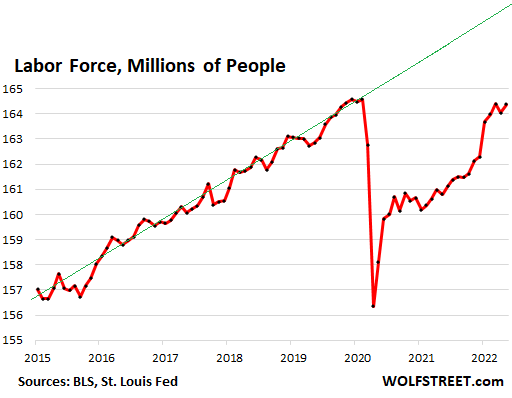 The “labor shortage” also crops up in other data, such as the record 12 million job openings, not seasonally adjusted, and the huge amount of churn in the labor market, with people job hopping and companies aggressively trying to hire people who already have jobs. But OK, this data was for job openings in April. The hiring freezes announced in May might take some of those job openings off the top, and we’ll find out in a month.

Wages surged among non-managers, but didn’t keep up with raging inflation.

Overall average hourly earnings ticked up by 0.3% (10 cents) from the prior month, to $31.95 in May, and was up by 5.2% from a year ago. Beyond the distortions during the pandemic, the past few months were the largest year-over-year increases in the data that go back to 2006. This category includes all employees in all industries, from management to entry-level workers: 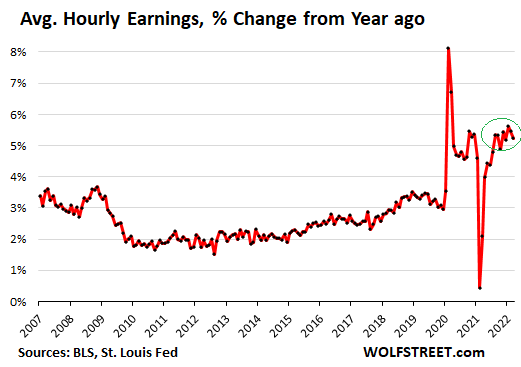 The distortions in hourly wages during the pandemic were a result of millions of low-wage workers getting laid off while office workers switched to working from home, which removed tens of millions of lower-paid workers from the mix, thereby inflating the average hourly earnings. It snapped back when they returned to work.

Average hourly earnings of non-management workers, the “production and nonsupervisory employees” in all industries combined, from waiters to coders, as long as they were in non-management roles, rose by 0.6% (15 cents) for the month, and by 6.5% from a year ago to $27.33 per hour.

Beyond the distortions in 2020, the past six months were the biggest year-over-year jumps since early 1982: 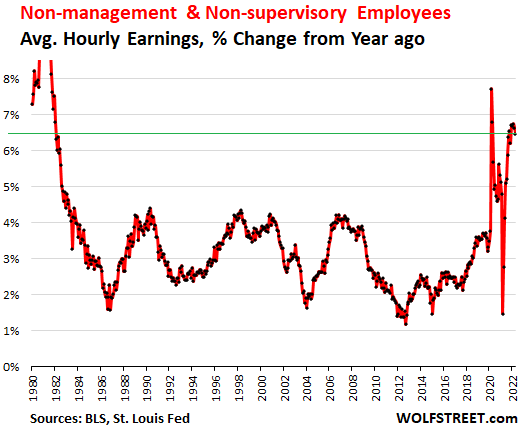 These are big wage gains. But they were insufficient to keep up with raging inflation. The headline Consumer Price Index (CPI-U) at the last reading raged at 8.2% year-over-year. The CPI for All Urban Wage Earners and Clerical Workers (CPI-W) raged at 8.9%. Wage increases, even at 6.5% are far below the rate of CPI inflation.

The Employment Population ratio, which tracks the percentage of people in the working-age population who are working, ticked up to 60.1%, after the dip in April, and is back where it was in March. Before the pandemic, it was a full percentage point higher (61.2% in February 2020).

The unemployment rate in its narrowest form remained at 3.6%, unchanged for the third month and roughly where it had been before the pandemic. This is the percentage of people who are in the labor force but don’t have work despite their active efforts of finding work.

The number of unemployed people who are actively looking for work ticked up from April, to 5.95 million, but were still the second-lowest (behind April) since February 2020 and are roughly in the pre-pandemic range.

Not good for stocks.

Overall, this is the image or a very tight labor market that is tight for the wrong reasons – in that the labor force, though growing, has not returned to pre-pandemic trend, and might not return to it, which has constrained hiring, and has made it difficult for companies to expand, or even catch up with demand, and it pushed up wages, which is a good thing for workers – thank god, finally!

And this report on the labor market doesn’t give the Fed any reasons to slow down its rate-hike path; on the contrary, it points to a budding and dreaded wage-price spiral that tends to nurture and fuel long-term inflation that is then hard and painful to dislodge. And the Fed has become nervous about it. And that’s not good for stocks either.

160 comments for “These Jobs Reports Are Not Good for Stocks”