Layoffs at record low, “quits” near record high with huge number of “hires,” amid massive churn as people go job-hopping.

Large companies in tech (including Microsoft), social media (including Facebook and Twitter), streaming services (including Netflix), used-vehicle tech (including Carvana), and other segments have spread the news that they’re imposing hiring freezes on part or all of their operations, or that they’re actually laying off people, to cut costs as their stocks have come down hard or collapsed. Most of this started in late April and in May. But companies in manufacturing and construction have been lamenting the opposite: labor shortages that keep production down.

Today’s Job Openings and Labor Turnover (JOLTS) for April is beginning to shed the first glimmers of light on these shifting hiring priorities, in a labor market that remains overall super-heated.

In some industries, job openings spiked to new records; in other industries, job openings fell sharply for the first time in this cycle, but remained in the astronomical zone. There were huge numbers of “hires” and near-record “quits” in a sign of massive churn as people quit one job to take a better job somewhere else; accompanied by record low layoffs – that was in April.

These job openings are not based on online job postings, but on what companies and government entities said their hiring needs were: 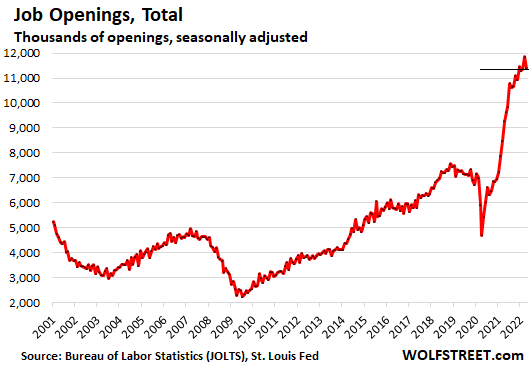 The JOLTS data is routinely cited by the Fed in its rate-hike decisions, specifically the astronomical job openings and the quits – aspects of a “very, very, very strong labor market,” as Powell likes to call it at the FOMC press conferences.

Professional and business services (includes tech and social media companies and is the largest category by job openings): Job openings fell by 149,000 seasonally adjusted in April from March, the largest drop since April 2020.

But that drop came off the record level of job openings in March, and barely made a dent, with job openings at the end of April at 2.18 million, the second highest ever, and up a stunning 87% from April 2019.

Note that most of the hiring-freeze-and-layoff news from tech and social media came out in May, which should provide for a further and perhaps bigger decline in the next JOLTS release: 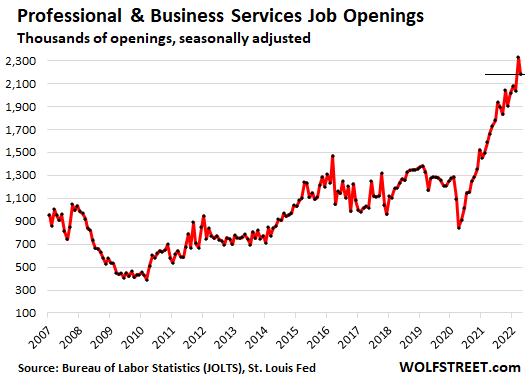 Healthcare and social assistance: Job openings plunged by 266,000 in April from March, seasonally adjusted, the largest drop on record, to 1.80 million openings. But this was still up by 44% from April 2019: 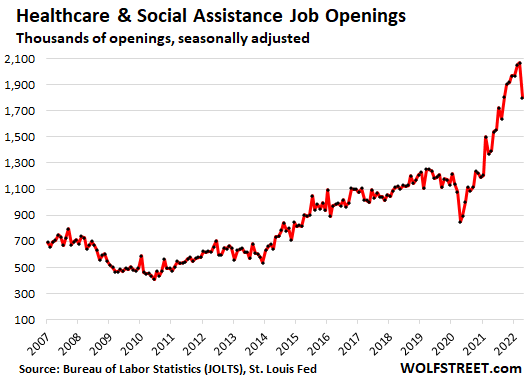 Leisure and hospitality: Job openings have been dropping for months. These companies had hiked pay and were able to fill a large part of the jobs that had vanished during the pandemic, as consumers stormed back to restaurants, hotels, and bars. In April job openings dropped by another 147,000 from March, to 1.51 million, still up by 48% from April 2019: 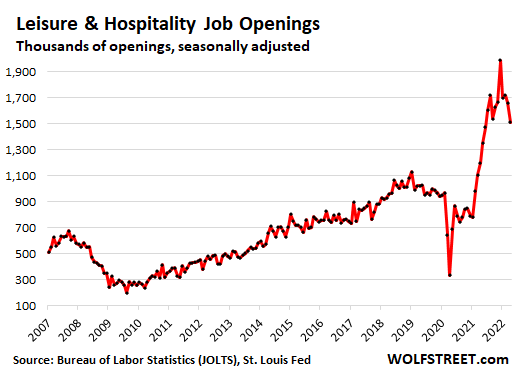 Education and health services: Job openings plunged by 274,000 in April from the record in March, seasonally adjusted, the largest drop ever. But at 2.0 million job openings, the industry is still in the astronomical zone, up by 45% from April 2019: 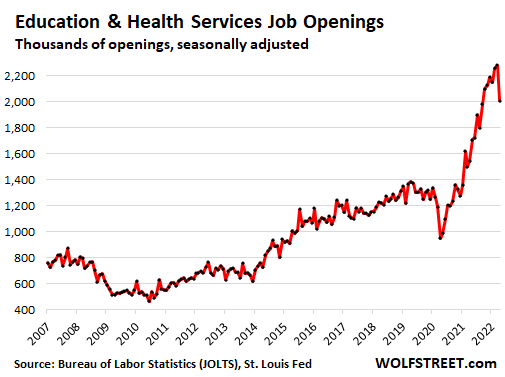 Retail trade: Job openings plunged by 162,000 in April from the record in March, seasonally adjusted, the biggest drop since November 2019. At 1.1 million, job openings are still up by 45% from April 2019: 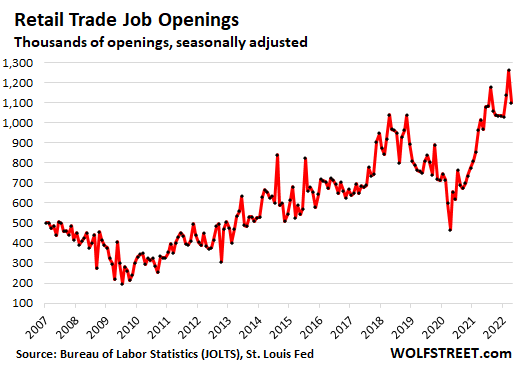 Manufacturing: Job openings spiked to a new record of nearly 1 million, seasonally adjusted, up by 115% from April 2019: 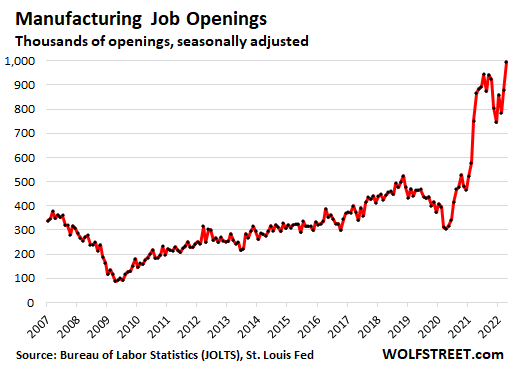 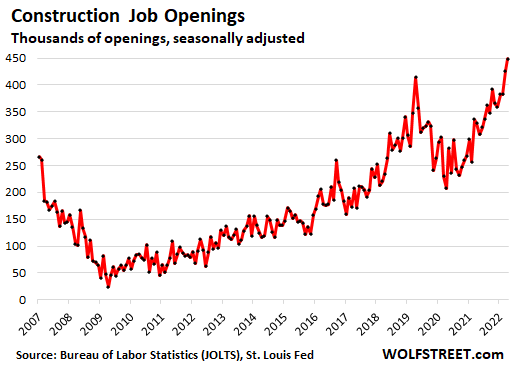 Transportation, warehousing, and utilities: Job openings spiked to 585,000, the third-highest ever, behind September and October last year: 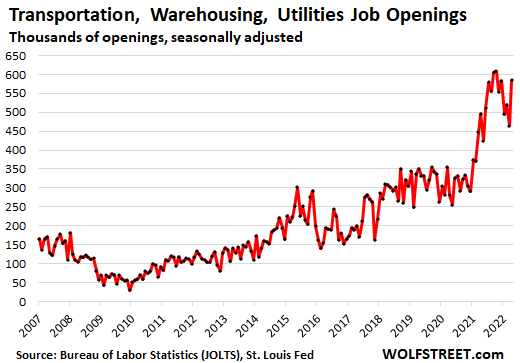 Record low layoffs: The number of workers who were laid off or discharged involuntarily in April declined to 1.25 million, seasonally adjusted, the lowest in the data going back to the year 2000: 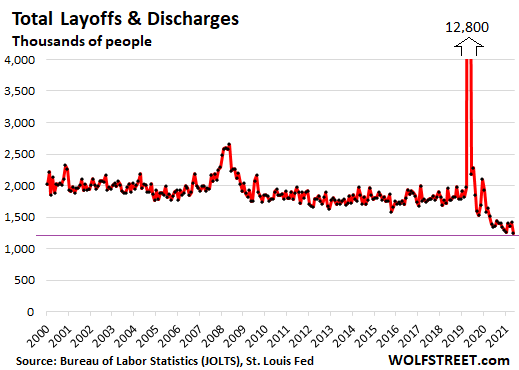 Near-record high “quits”: The number of workers who voluntarily quit jobs in April dipped to 4.18 million, just a tad below the record in November, and up by 26% from April 2019.

These “quits” have been in the astronomical zone since last June, and largely reflect workers who “quit” at one company to fill a job opening at another company, and creating a new job opening where they left.

These quits create a magnificent amount of churn as companies are aggressively trying to hire people who already have jobs, while workers have discovered their power in the labor market. Many are switching to better-paying industries and thereby spread pay increases around the economy, as employers offer higher pay to retain and hire workers. 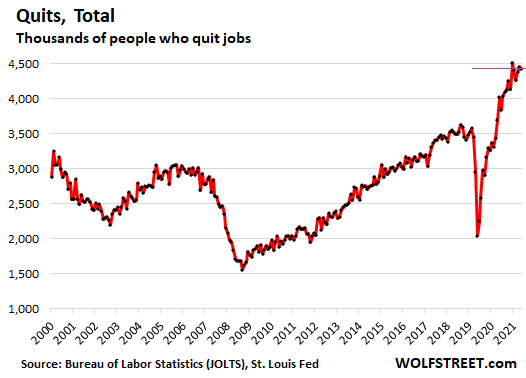 Aggressive hiring: Private sector employers hired 6.2 million workers in April, up by 9% from April 2019, and roughly in the same range since June 2021. 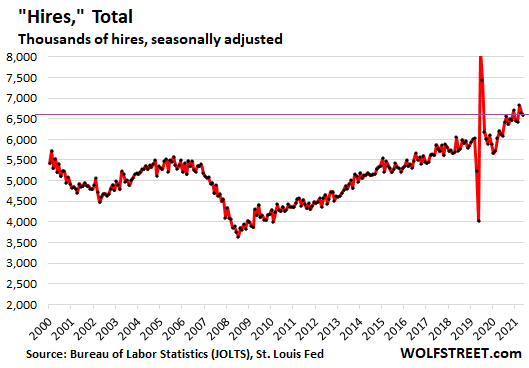 Massive churn. For the past few months, “hires” have been running at about 6.2 million, while “quits” have been running at about 4.1 million, with total job openings roughly stable at near 11.5 million. Which shows that the majority of “hires” filled jobs that had been left behind by the “quits,” and that the “quits” at one company were then showing up as “hires” at another company: the signature of massive churn, as the job opening itself just got shifted from one employer to another.

The number of hires was held down by the difficulties that companies face trying to hire people who already have jobs or who don’t want to go back to work for a variety of reasons.

This super-hot labor market is contributing to the costs for companies, that then try to pass on the costs via higher prices, which is what inflation is. And workers, who’re now able to obtain pay increases or higher-paying jobs somewhere else, have more money to spend for those higher prices, thereby further enabling inflation to thrive. And we’re been off to the races, which we’ve for 15 months.

114 comments for “First Big Drops in Astronomical Job Openings in Key Sectors, But Spikes to Record in Manufacturing & Construction”