China still produced more crude steel than the rest of the world combined. Just a baby step, but a huge change in direction.

Production of crude steel – ingots, semi-finished products (billets, blooms, slabs), and liquid steel for castings – soared globally, and spiked in the US, but fell in China for the first time in years. And China’s share of global crude steel production, after soaring for years, fell for the first time since 2010. 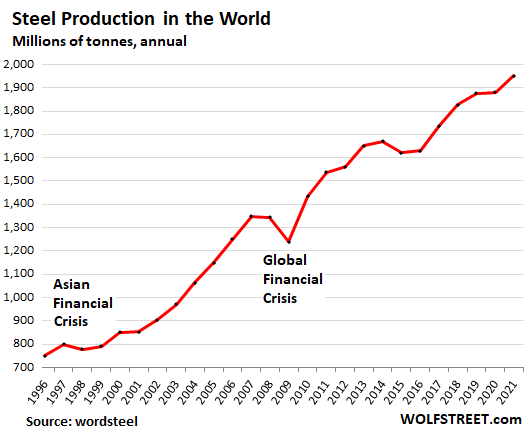 China v. the Rest of the World.

The year 2021 was a reversal. In 2020, of the top five largest producers – China, India, Japan, the US, and Russia – only China increased production. But in 2021, China’s production fell; in the other four countries, in fact in 18 of the remaining top 19 countries, production rose, and in some countries by the double digits, including the US (+15.2%). The other exception was Iran (-1.9%).

Over the two decades since 2001, global crude steel production surged by 129%, and nearly all of that gain was produced in China. Production in NAFTA (the US, Canada, and Mexico) exceeded China’s production through the year 2000. In 2001, China’s production blew past NAFTA and the gap exploded from there, as NAFTA’s production declined, and China’s soared. But in 2021, the gap narrowed. That’s why the reversal in 2021 was so peculiar: 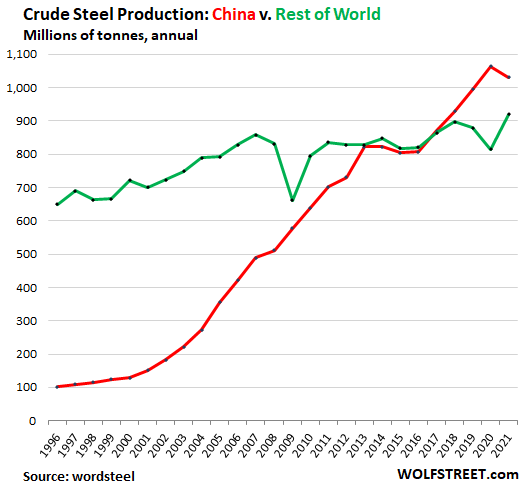 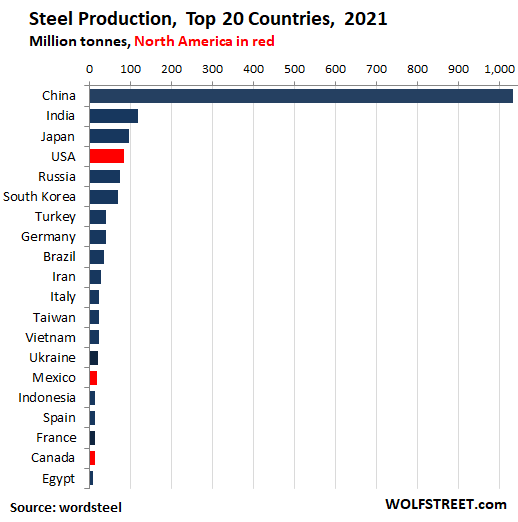 So it’s not that China is dumping crude steel on the global market; it produces the crude steel largely for domestic use, but then exports some of the higher value finished steel products, such as bar, pipe, and rolled steel. Chinese manufacturers also use the steel to manufacture sophisticated equipment with steel components, such as automotive components, cars, appliances, or high-speed train systems that are then sold domestically or exported.

Steel goes into nearly everything. So in 2021, amid all the horrid supply-chain problems, the world learned that it’s not such a great idea to be reliant to such a great extent on just one country. And while diversifying steel production to other countries, including the US, was just a baby step, it was still a huge change in direction.

55 comments for “Crude Steel Production in 2021 Shifted from China to Other Countries amid Supply Chain Chaos: US Production Spiked 15%”