Sales in the US of previously-owned homes – houses, condos, and townhouses – fell by 2.4% in April from March, based on the seasonally adjusted annual rate of sales, and were down 5.9% from a year ago, with a much steeper decline in condo sales (-13.9% year-over-year), than in house sales (-4.8% year-over-year), the National Association of Realtors reported today.

It was the ninth month in a row of year-over-year declines, even as supply of homes listed for sale continued to rise (data via YCharts): 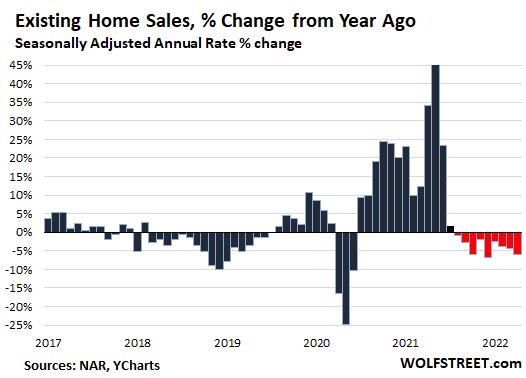 The seasonally adjusted annual rate of sales, at 5.61 million, was the lowest since June 2020 (data via YCharts): 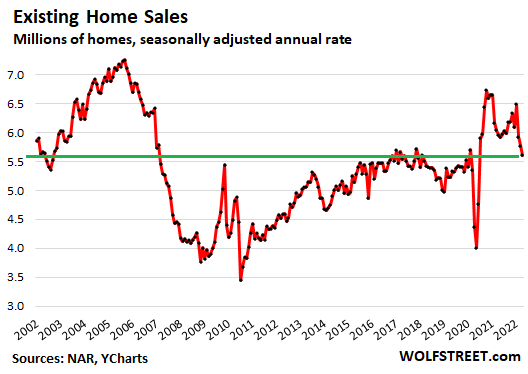 By Region, the percent change of the seasonally adjusted annual rate of total home sales in April from March, and year-over-year (yoy):

In California, sales plunged, except at the top.

According to a separate report by the California Association of Realtors (CAR), sales volume of houses dropped 8.5% in April year-over-year; and sales of condos plunged 20%, “as rising interest rates and higher home prices depressed housing demand,” the CAR said.

Sales in the coastal metros of California plunged by the most, and this is where prices have long entered the astronomical zone. Something serious is going on there:

In the Los Angeles metro, which includes San Diego:

In the San Francisco Bay Area:

And the CAR added:

“A change in the mix of sales continues to play a role in statewide record-setting home prices as sales in high-priced markets remain stronger than their more affordable counterparts.

“The share of million-dollar home sales increased for the third consecutive month, reaching the highest level on record at 34.7 percent. Home sales priced below $500,000, meanwhile, dipped again in April and hit the lowest level ever.

“Sales dropped by double-digits for price segments $750,000 and below, while sales above $2 million remained on the rise on a year-over-year basis.

“The shift in the mix of sales toward high-end homes is expected to persist in the upcoming months.”

The average 30-year fixed mortgage rate this week (with conforming balances and 20% down) at 5.49% was about 2.2 percentage points higher than a year ago, according to data from the Mortgage Bankers Association. The last two weeks were the highest since 2009

But we haven’t seen anything yet. The sales figures today are based on sales that largely closed in April, and were negotiated in March, with mortgage rates from January through March, when these buyers applied for mortgages and obtained guaranteed mortgage rates (rate locks) that are good for a period of time, such as three months, to buy a home with. The green box shows the mortgage rates that applied to purchases that closed in April, roughly in the range from 3.2% to 4.8% (rate data via Investing.com): 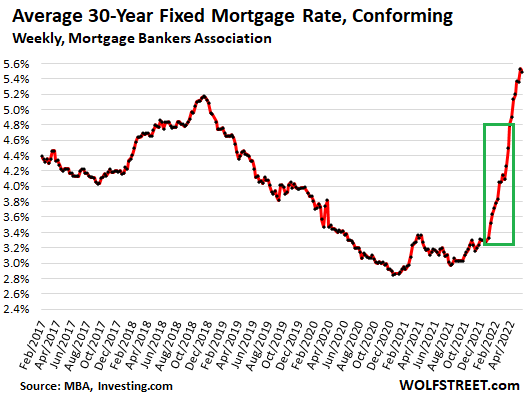 The plunge in applications for mortgages to purchase a home indicates that over the next few months, sales volume will decline further. In the latest reporting week, purchase mortgage applications were down 15% from a year ago, and were back at the low points in late 2018 when the housing market started to crack under QT and rising interest rates (with mortgage rates just above 5% in November 2018).

At the time, inflation was below the Fed’s target, and the Fed pivoted in December 2018. But that pivot isn’t going to happen this time, with raging inflation being the biggest economic problem in the US – and the Fed has barely started to raise rates and won’t start QT until June.

Inventory for sale and supply rise.

The number of homes listed for sale in the US jumped by 100,000 homes to 1.03 million in April, the first time over 1 million since October.

Supply of homes listed for sale in the US rose to 2.2 months, from the low in January of 1.6 months (data via YCharts). 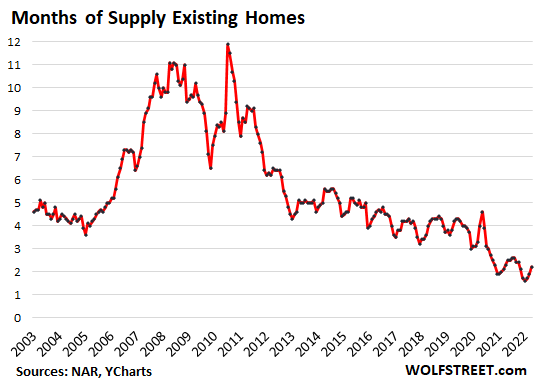 US Median Price pushed up by top-end sales. Bottom fell out below $500K. 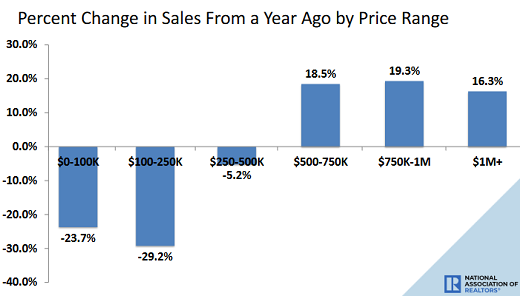 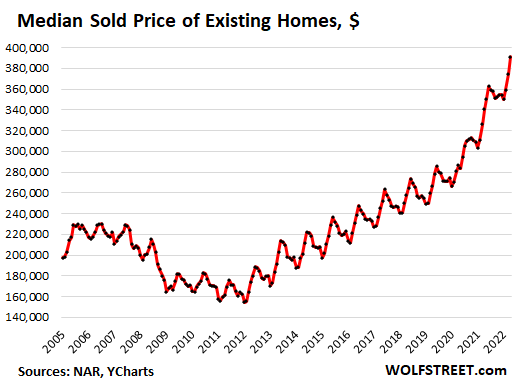 Investor share of sales and all-cash sales dipped, stayed in the same range.

Individual investors or second-home buyers, who make up many cash sales, according to the NAR, purchased 17% of the homes in April, down from 18% in March and from 19% in February and from 22% in January, but same as in April 2021 (17%).