The US gross national debt has now reached $30.4 trillion, having spiked by a $7.0 trillion since March 2020. Every one of these Treasury securities had to be bought and is held by some institutional investor, bank, government entity, or individual in the US or globally.

The red-hot question is: Who the heck bought and is holding all these Treasury securities? 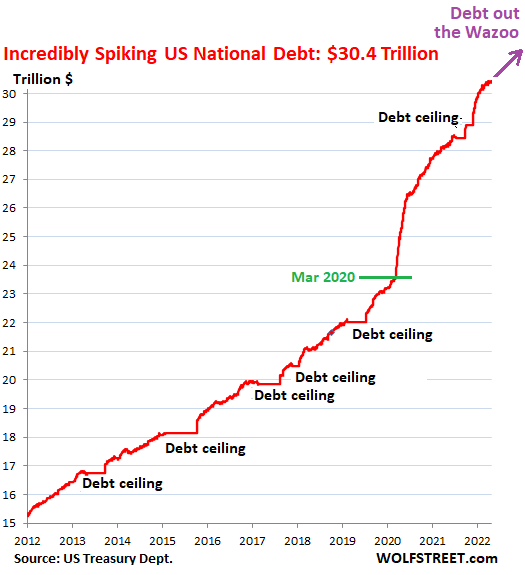 Treasury securities have become more attractive this year as yields have risen across the board, but remain woefully below the rate of CPI inflation. Yields have risen because investors demanded higher yields to buy them. If there isn’t enough demand for Treasury securities, then yields rise until there is enough demand. If yields rise enough, I’m a buyer. Yield solves all demand problems.

The Fed, the single largest buyer until early this year, is no longer adding to its holdings. And in June, it will start reducing its holdings, even as the government will issue more debt and someone has to buy it all.

So who is holding this Treasury debt in our increasingly iffy times?

Foreign Creditors of the US government.

Foreign holders of Treasuries: $7.61 trillion at the end of Q1, according to the Treasury Department’s Treasury International Capital (TIC) data, down by $134 billion from the prior quarter, but up by $575 billion from a year ago.

About $4.07 trillion of it is held by foreign central banks and government entities; the rest by foreign institutional investors, corporate entities, banks, and individuals.

Over the years, the US gross national debt has out-spiked the growing holdings by foreign entities, and at the end of Q1 for 25.1%, squeaking past the prior multi-year low, and down from the 34% range in 2012 through 2015 (dollar = blue line, left scale; % of total US debt = red line, right scale): 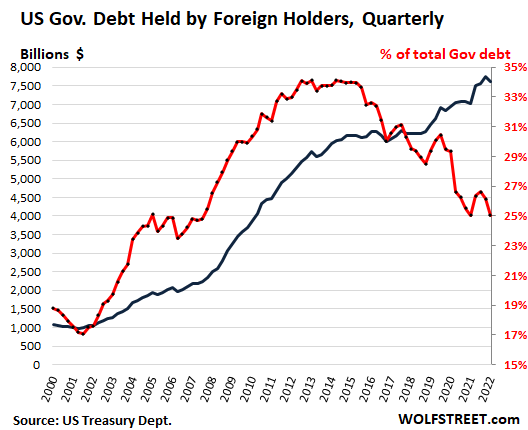 Japan: $1.23 trillion at the end of March, after a $74 billion plunge during the month. Japan remains the largest foreign creditor of the US, and with that plunge in March is now about back where it had been a year ago.

China: $1.04 trillion, whittling down its holdings: 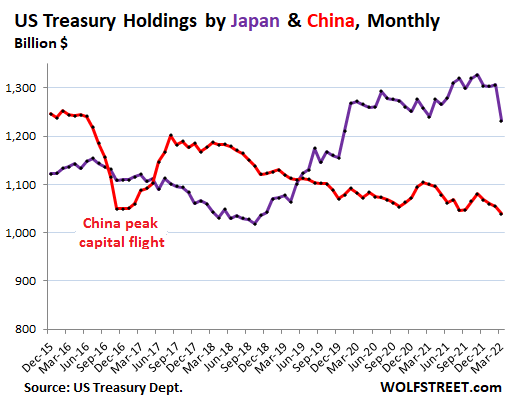 Japan and China have been much less important as creditors to the US, as the gross national debt has continued to out-spike their relatively stable holdings. In March, Japan’s share (purple) dropped to 4.1% and China’s share (red) dropped to 3.4%: 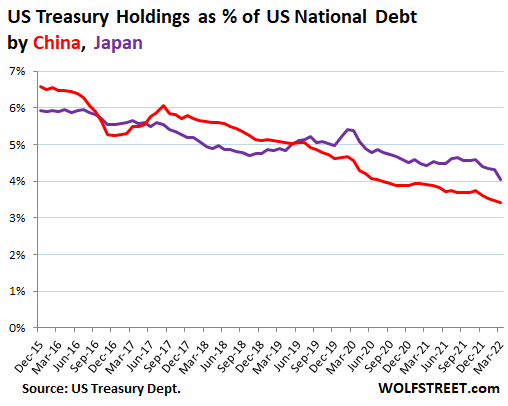 Most of the 10 biggest foreign holders after Japan & China are tax havens and financial centers, some of them just small countries that cater to global corporations and the elite, including US corporations, that can shelter their capital there in offshore mailbox entities where some of their Treasury holdings are registered.

The third largest foreign holder, after Japan and China, is the UK with $635 billion in Treasury securities. This is the financial center of London, the “London Laundromat,” and anyone anywhere could be the beneficial holder of these securities. France and Canada have surged onto the scene recently with massive increases.

The top 10 foreign holders behind Japan and China:

Domestic creditors of the US government.

US government “internal” holdings: $6.52 trillion, a record, up by $48 billion from the prior quarter and by $411 billion year-over-year, according to Treasury Department data.

These funds are held by US government pension funds for military personnel and federal civilian employees, the US Social Security Trust Fund, and other federal government funds that invest their balances exclusively in Treasury securities. In other words, the government owes these funds to current and future beneficiaries of those funds – and not “to itself.”

Their share of the incredibly spiking US national debt has continued to drop and in March reached a new multi-decade low of 21.5%, down from a share of 45% in 2008 (dollars = blue line, left scale; % of total US debt = red line, right scale): 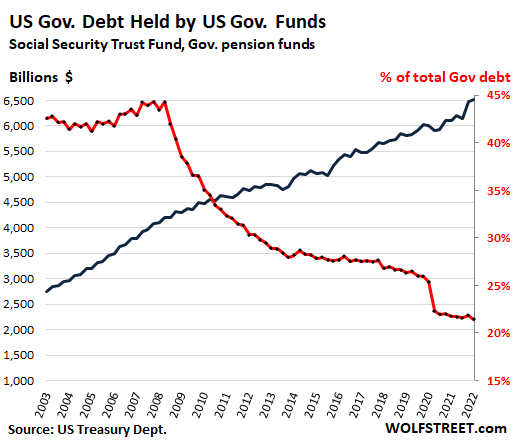 Federal Reserve: $5.76 trillion at the end of March, up by $818 billion year-over-year, and up by $2.42 trillion from March 2020 when it kicked off its most reckless money-printing binge ever. 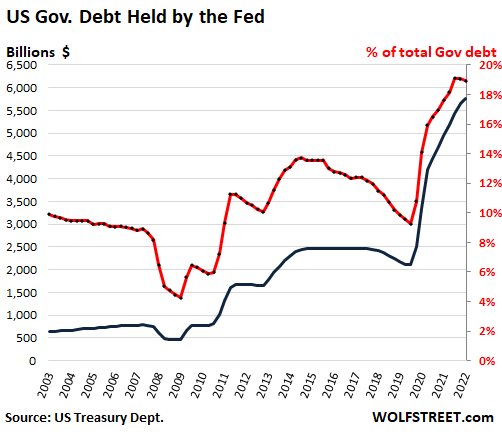 US Banks: $1.7 Trillion, according to the Federal Reserve Board of Governors’ data on bank balance sheets. This was up by $40 billion from the prior quarter and by $410 billion year-over-year. Banks, stuffed to the gills with cash, are gorging on Treasury securities, now that they’re paying a perceptible yield. They now hold 5.6% of the incredibly spiking US national debt: 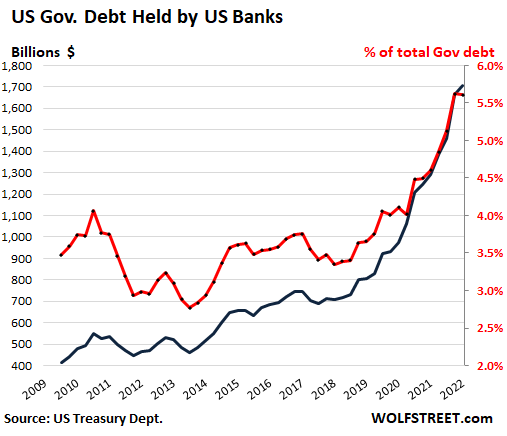 Other US institutional and individual investors: $8.8 Trillion, up by $722 billion from the prior quarter and up by $2.4 trillion from March 2020. These include bond mutual funds and money market funds, US pension funds, individual investors, such as me, US insurance companies, state and local governments, and other US entities. 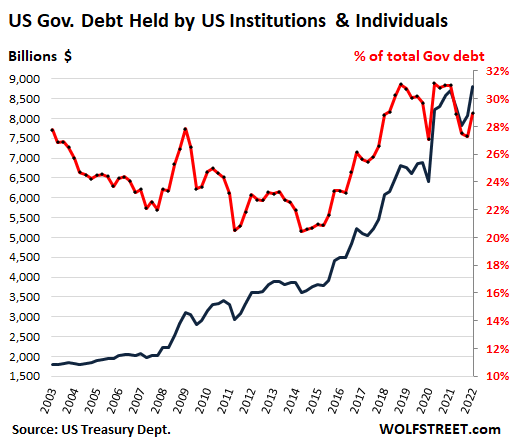 And here they are, the major holders the incredibly spiking US National Debt, stacked on top of each other: 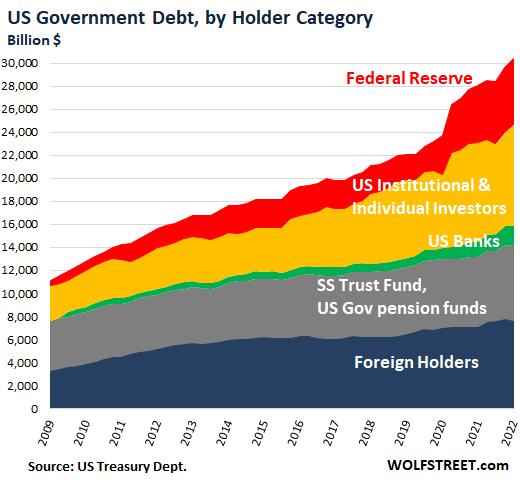 138 comments for “Who Bought the Incredibly Spiking US Government Debt, Now $30.4 Trillion in Treasury Securities?”