Biggest COLA since 1982 already eaten up by inflation.

The Social Security Trust Fund – the Old-Age and Survivors Insurance (OASI) Trust Fund – closed the fiscal year 2021 at the end of September with a balance of $2.76 trillion, down by 2.0% from a year earlier ($2.81 trillion), according to figures released by the Social Security Administration. After large increases in the prior decade, this was the second annual decline of the Trust Fund since 1990; the first occurred in 2018 (-0.8%).

The Disability Insurance Trust Fund is by law a separate entity from the OASI Trust Fund, and is not part of this discussion here.

The OASI Trust Fund invests exclusively in Treasury securities. At the end of the fiscal year, it held $2.73 trillion in interest-bearing long-term special issue Treasury securities and $22 billion in a short-term cash management security, called “certificates of indebtedness.” These securities are not traded, and so their value doesn’t change from hour to hour, and they don’t need to be marked to market because the Trust Fund purchases them at face value, and the US Treasury redeems them at face value. 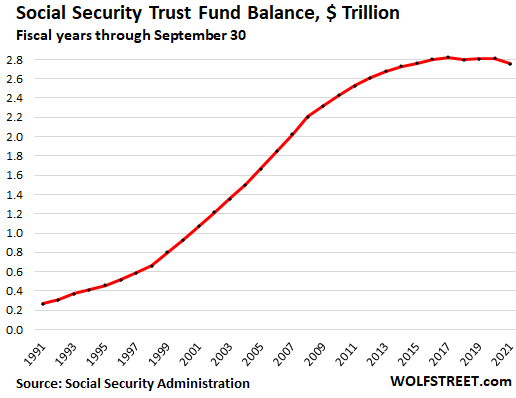 By investing on autopilot in Treasury securities that are not exposed to the market, the Trust Fund follows an ultra-low-risk strategy and operates with ultra-low administrative expenses, amounting to just 0.14% of the assets in the fund.

This strategy keeps Wall Street and its shenanigans away. For decades, Wall Street has been lobbying to “privatize” the Trust Fund in order to suck juicy fees out of those trillions of dollars.

According to the 2021 Trustee Report, 55 million people drew Social Security retirement benefits at the end of 2020: 49 million retired workers and dependents of retired workers, and 6 million survivors of deceased workers.

During 2020, the pandemic year, 175 million people paid into Social Security via payroll taxes – down by 3 million from 2019.

There are some real problems.

The Fed’s interest rate repression. The weighted average interest rate earned on the securities in the Trust Fund dropped to 2.40% in September. Before the Financial Crisis, the Fund was earning over 5%.

The effective interest rate earned from the Treasury securities in the Trust Fund has been declining for three decades: At first, the rate of inflation was coming down from the early 1980s, and yields were dropping across the board; and then, with the Financial Crisis, the Fed used QE to force down long-term interest rates.

The Fed’s interest rate repression since March 2020 is just starting to be reflected in the Trust Fund’s average interest rate and will hound it for years to come, even if long-term interest rates rise. 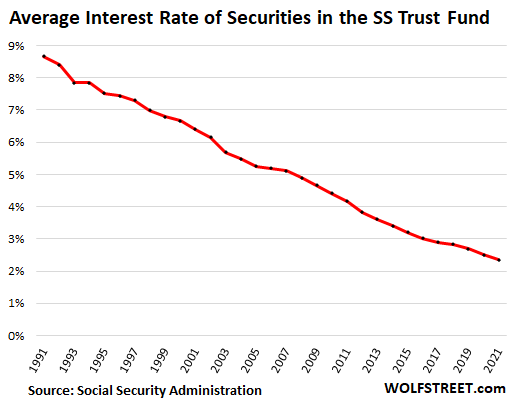 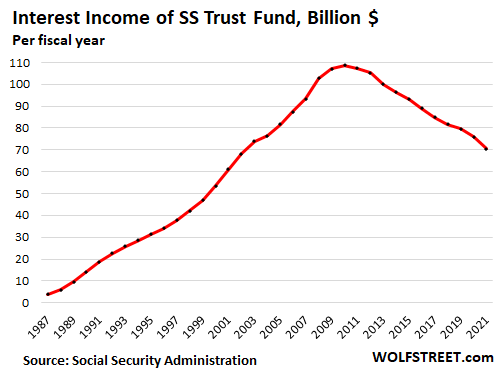 Total income fell below total outgo in fiscal 2021. Income from contributions ($831 billion), interest income from securities ($70.5 billion), and income from taxation of benefits ($34 billion) generated total income of $936 billion, down by $20 billion from the prior year.

Total outgo of the program (nearly all of it in form of benefits paid) rose to $991 billion.

The deficit generated by the lower income and the higher outgo reduced the Trust Fund balance by $55 billion. 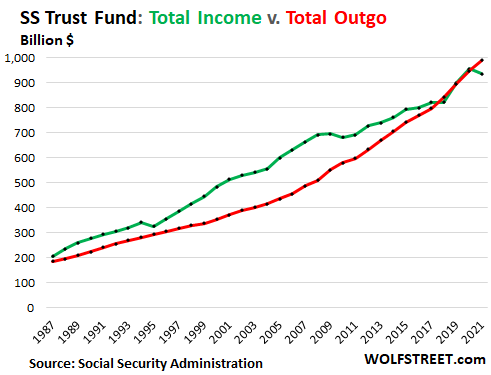 Employment fell off. Contributions to the fund depend on the labor market, and when people in high-paying jobs lose their employment, contributions sag. This happened during the Financial Crisis when banking, real estate, and many other sectors with high pay shed lots of jobs.

During the pandemic, those people switched to working from home and continued to make money and pay into Social Security. But people on the lower wage scale – such as workers at restaurants, retail stores, and service establishments – lost their jobs, and contributions dipped, but by a smaller amount than during the Financial Crisis: 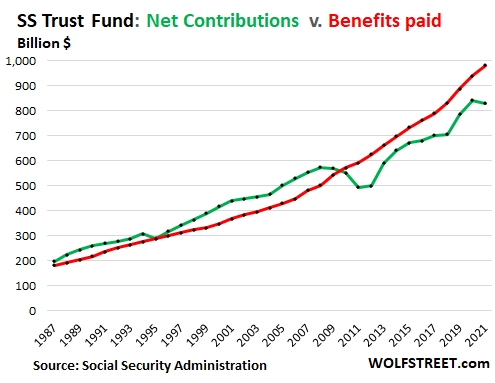 What has filled in the gap between 2010 through 2020 were the two other sources of income:

Social Security payments to beneficiaries are adjusted annually for inflation via “Cost of Living Adjustments” (COLA). The percentage of the COLA is the average CPI-W inflation rate in the third quarter, and is applied the following January for the whole year. The Social Security COLA for 2022 is 5.9%, the biggest since 1982.

The Fed still has its foot fully on the gas, printing money and repressing interest rates, thereby creating more fuel for inflation. The Fed will eventually react, but it will be too late and too slow to bring inflation down quickly. And the 5.9% COLA for 2022 may not cover even the official rate of inflation as measured by CPI-W.

Each year that the COLA is behind actual costs of living increases, it affects all future years of benefits because inflation and COLAs are compounding, and that gap between them is compounding as well. Even small gaps year after year compound into big differences after 10 or 20 years.

In addition, depending on where retirees live and how they live, actual costs of living increase faster than CPI-W.

The gap between actual increases in costs of living and the COLAs for each year causes Social Security benefits to lose a significant part of their purchasing power over the years.

Depletion of the Trust Fund — if unaddressed.

The Trust Fund, after years of flat-lining, declined in fiscal 2021 by 2%. Relying on estimates for future demographics, employment, wages, retirements, mortality, births, immigration, and the like, actuaries attempt to estimate how income and outgo of the system will impact the Trust Fund.

The Pandemic has shredded the prior estimates in both directions and has created a lot of uncertainties about future estimates.

Employment, earnings, and interest rates “dropped substantially” in 2020, the 2021 Trustee Report pointed out. This lowered the income into the system.

But the report also assumed that the pandemic would “lead to elevated mortality rates over the period 2020 through 2023.” This would lower the outgo.

The lower number of working people was in part caused by the surge in early retirements of people old enough to draw Social Security that then started drawing Social Security earlier than they would have otherwise. This increased the outgo.

The 2021 Trustee Report estimated, based on the new assumptions for the pandemic era, that the OASI Trust Fund reserves, now at $2.76 trillion, would become depleted in 2033.

Social Security won’t “go broke,” but adjustments will be made.

It simply means that workers will have to pay more, or benefits will get trimmed, or both. Social Security has been fixed before. So adjustments will be made before the depletion date.

Contributions could be increased by raising the income cap or by increasing the percentage of contributions, or both.

Benefits could be reduced, including by trimming benefit payments by perhaps something like 2% or 3%; or more insidiously by changing how the COLA is calculated.

COLA changes are insidious because they’re technical and people don’t understand them. But they have a large impact disproportionately on people who can least afford it, when they can least afford it – lower-income people, late in life.

The purpose of COLA reductions is to cause a faster loss of the purchasing power of the benefits, while inflation increases wages and thereby increases contributions on the income side.

Proposals have been floated over the years to replace CPI-W for COLA calculations with a chain-type price index, such as the PCE price index, which pegged inflation in September at 4.4%, compared to CPI-W in September of 5.9%.

If a change of the COLA calculation lowers the COLA adjustment by 1 or 1.5 percentage points on average per year, compounded over 20 years, it would have a very large impact on the purchasing power of those benefits. It would doom the lower-income elderly.

So the Social Security system won’t “collapse” or go “broke” in 2033, but benefits will be trimmed or contributions will be increased, or both, before then. The shortage this year was $55 billion, in a system that takes in and pays out nearly $1 trillion, in a $23-trillion economy.

Social Security will be there for you, but…

Social Security benefits will be there for you, but they’re guaranteed to lose purchasing power year after year, even if the COLA calculations are not changed, and much faster if they’re changed.

This is not an accident. Inflation measures are carefully engineered to not capture the true increases in the costs of living.

Retirees relying exclusively on those benefits might not feel the loss of purchasing power for the first year, but it compounds and eventually becomes painful. If it is tough to live exclusively on Social Security early on, it will be brutal after 20 years of retirement.

Social Security was never intended to provide adequate retirement on its own, and it’s not going to. Some people are trying to deal with this by moving to a cheaper location in the US, or to a cheaper country, such as Mexico or Thailand, which can be a great adventure.

A hedge against inflation in retirement is to keep working.

My patented solution is twofold: Build a nest egg while working, and work for as long as possible, either doing what you’ve been doing, or doing something new and interesting and fun. Full-time is great, but even a part-time gig is great, and for all kinds of reasons, not just money, and even if you have plenty of money and don’t need to work.

141 comments for “Status of Social Security and the Trust Fund, Fiscal 2021: Beware of Vicious Dog”