But the mayhem started beneath the surface in Feb 2021.

Stocks on Friday turned Thursday’s blistering beautiful rally into a miserable dead-cat bounce. And it put some marks into the sand.

The real fireworks took place at the Nasdaq, whose composite index plunged 4.2% and is now down 23.9% from the its intraday high in November, and down 11.7% year-over-year. For the month of April, it dropped 13.5%, the worst month since October 2008, which was the month following the Lehman bankruptcy.

This chart shows the percentage change of the four indices over the past 12 months since April 29, 2021, with all four indices ending today below the red line (data via YCharts): 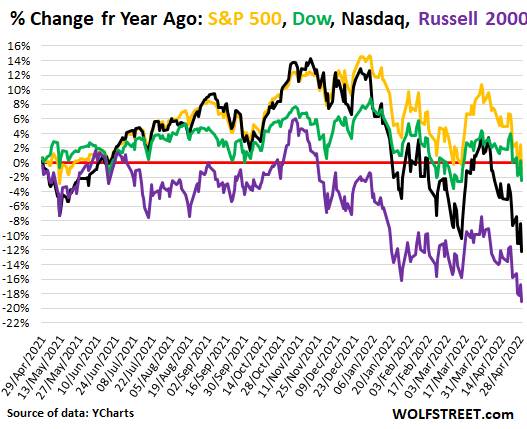 The biggest stocks are falling apart.

Today’s hero was Amazon [AMZN], which plunged 14% today. Last night, it had reported a big loss, slowest revenue growth since the dotcom bust, and rip-roaring expenses, topped off by nauseating guidance. It is now down 34% from its closing high in July 2021, despite a huge bout of financial engineering announced in March: a 20-for-1 stock split and a massive share-buyback program, just now when it lost money: 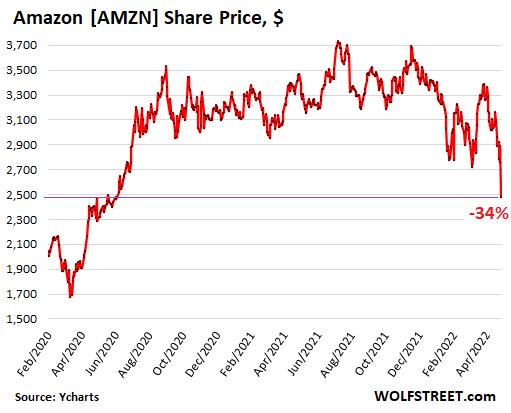 The biggest stocks that were able, by their sheer heft, to cover up the mayhem beneath the surface after February 2021 have now let go.

I threw in the N’s because they were once part of the infamous FANGMAN stocks., percent change from high, and date of closing high:

As a sign of our times, Microsoft peaked in November to the day when CEO Satya Nadella dumped half of his Microsoft shares with totally impressive prescience, and it too has now let go, and he sure knew when to dump the shares into someone else’s lap.

The mayhem beneath the surface started in Feb 2021.

The market started falling apart beneath the surface in February 2021, and soon there was utter mayhem beneath the surface, with dozens and dozens of IPO stocks and SPAC stocks and other highfliers getting systematically and brutally wiped out by 70%, 80%, 90% or more from their ridiculously overvalued peaks.

From stocks that had recently gone public to stocks that had been around for a while but had been discovered by the stock jockeys during the pandemic were taken out the back and shot – I covered some of them in my Imploded Stocks. This is the dotcom bust all over again, only much bigger and much worse.

But the big ones kept the show going and covered up the mayhem beneath the surface. Then last Fall, the big ones started giving in, one after the other, starting with Facebook that tried to divert attention from its problems by uselessly changing its name to Meta. And one after the other they began to wobble, stumble, and plunge.

So this has been in the works for over a year, and it took out the smaller most speculative and most ridiculously overblown highfliers first, so well summarized in the ARK Innovation ETF [ARKK] and the Renaissance IPO ETF [IPO].

The ARK Innovation ETF, which tracks the biggest hype-and-hoopla stocks, dropped 3.6% today and is down 70% from its high on February 16, 2021. Yes, that February, when it all started coming apart: 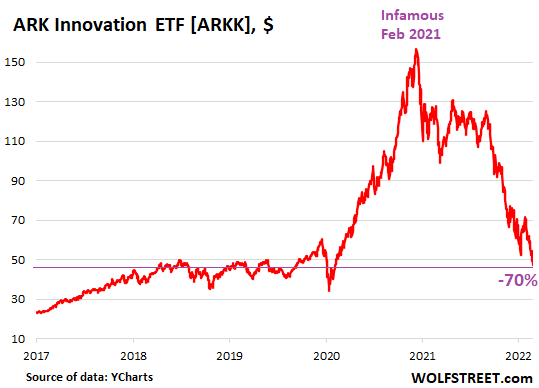 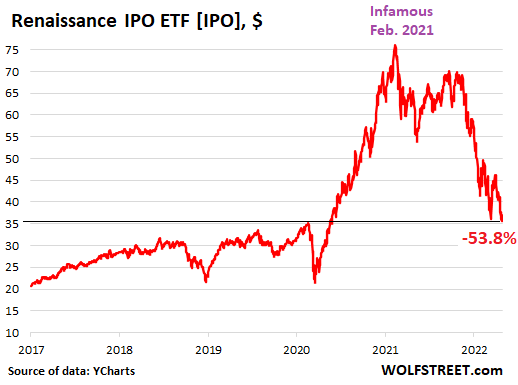 But “Nothing Goes to Heck in a Straight Line.”

That’s the WOLF STREET dictum. There will be a bounce. Dip buying is alive and well when the price is low enough. Dip buyers that didn’t get out of the way fast enough this year got carried out on stretchers. Turns out, dip buying profitably is a lot harder in a down market than in a relentless bull market.

Thursday’s huge rally lasted one trading day and ended at 4 PM, and afterhours it was already a mess, following Amazon’s earnings report. Thursday was a classic dead-cat bounce, powered by widespread short covering and dip buying. And dip buyers, if they weren’t able to sell yesterday, got knocked around today.

Nevertheless, they will still be trying to buy the dip and drive prices up for a little while, and it can happen any day because nothing goes to heck in a straight line.