“It is of paramount importance to get inflation down,” she said to get markets to prepare for what’s coming. And they’re preparing.

Fed Governor Lael Brainard, one of the biggest doves on the Fed’s monetary policy committee, explained this morning in detail that inflation is hitting lower-income households much worse than higher-income households, and that it is hitting disadvantaged households, such as those with limited access to online shopping, even harder, and their inflation rates are far higher than the national average inflation rates because the basket of goods they’re buying is systematically different, and that they’re spending nearly all their money on necessities, and that they often cannot substitute items whose prices have jumped with lower-cost items, because they’re already buying the lowest-cost items to begin with, and there is no way to go lower on the ladder. They can only buy less, such as buying less of the cheapest store-brand cereal, which is the example she used.

It was an indictment of Consumer Price Inflation, depicting it as the scourge that it is for the people at the lower half of the income scale. And then she said that the Fed would have to, and will, crack down on inflation to get this under control.

Upon the speech, whose text was released in advance earlier this morning, the average 30-year fixed mortgage rate spiked by 18 basis points to 5.02% today, the highest since November 2018. 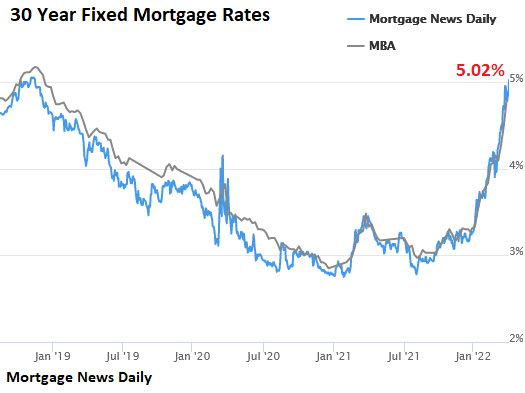 But back in November 2018, this measure of mortgage rates by Mortgage News Daily, had peaked at 5.05% briefly, before the Fed buckled under Trump’s withering attacks. But back then, inflation was below the Fed’s target, and now inflation is spiking and out of control, and it’s the White House that is now under withering fire from voters over the spike of consumer prices. There isn’t anything in recent years that compares to this. The comparison has to be to the 1970s.

And instead of fretting about the spiking mortgage rates, Brainard agreed that the market was beginning to price in the coming “expeditious increase in the policy rate” and “a more rapid reduction in the balance sheet” compared to last time:

“Consistent with these expectations, we have already seen significant tightening in market financing conditions at longer maturities, which tend to be most relevant for household and business decision-making. For instance, 30-year mortgage rates have increased more than 100 basis points in just a few months and are now at levels last seen in late 2018,” she said.

Brainard’s comments today added a new political reality to the Fed’s policies: Inflation is a horror show at the lower end of the income spectrum, with much higher inflation rates among these households than the national average inflation rates that are more reflective of inflation rates experienced by higher-income groups.

The two-year Treasury yield spiked by 9 basis points to 2.53% by noon, the highest since March 2019, having exploded in six months from 0.2% last October, which is a huge move. Another 30 basis points will take the two-year yield to 2.83%, which would be the highest since 2007. And the Fed hasn’t even seriously begun to raise rates. It is just telling the markets to get ready for it: 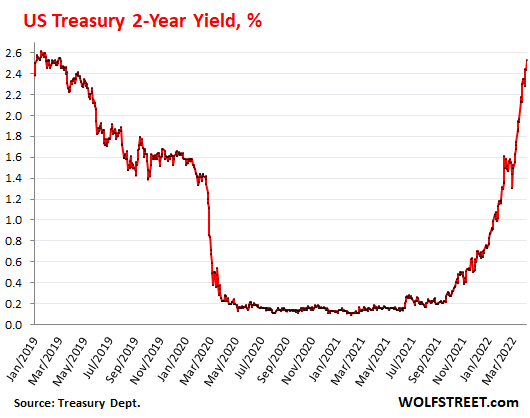 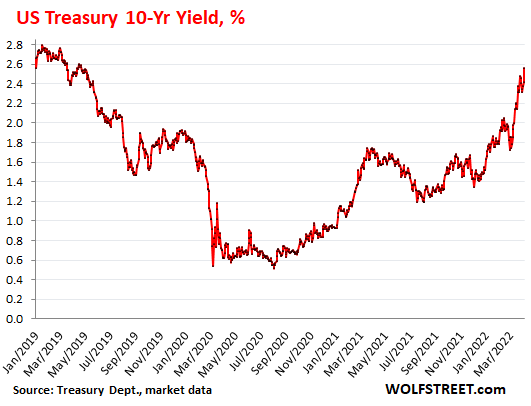 The longer maturities – the five-year yield to the 30-year yield – will feel the Quantitative Tightening when the Fed will shrink its balance sheet by several trillion dollars. And this will levitate the yield curve at that end, even as the short-term yields are coming up with the Fed’s rate hikes. The green line is the yield curve at its historic lows in August 2020: 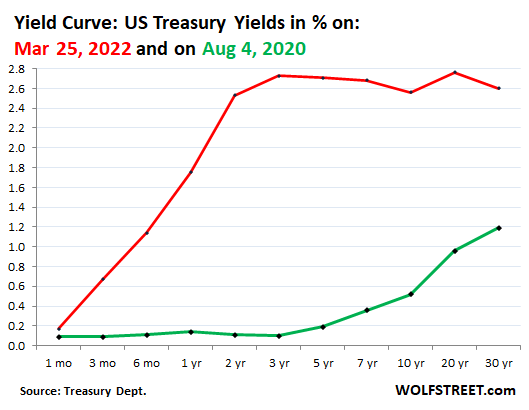 This is what the market reacted to:

“It is of paramount importance to get inflation down,” Brainard said in her speech today.

“Currently, inflation is much too high and is subject to upside risks. The Committee is prepared to take stronger action if indicators of inflation and inflation expectations indicate that such action is warranted,” she said.

“We are committed to bringing inflation back down to its 2 percent target, recognizing that stable low inflation is vital to maintaining a strong economy and a labor market that works for everyone,” she said.

The FOMC would “continue tightening monetary policy methodically through a series of interest rate increases and by starting to reduce the balance sheet at a rapid pace as soon as our May meeting,” she said.

“I expect the balance sheet to shrink considerably more rapidly than in the previous recovery, with significantly larger caps and a much shorter period to phase in the maximum caps compared with 2017–19,” she said.

“I expect the combined effect of rate increases and balance sheet reduction to bring the stance of policy to a more neutral position later this year, with the full extent of additional tightening over time dependent on how the outlook for inflation and employment evolves,” she said.

And so far, the “outlook” of the Fed has evolved drastically, to now seeing much higher inflation for far longer than a year ago.

For the consequences of the Fed’s policies, read: My “Wealth Disparity Monitor” of the Fed’s Money-Printer Era: Holy Moly. April Update of the Greatest Economic Injustice in Recent History