Consumer spending and asset prices both were boosted by them.

Homeowners refinance their homes largely for two reasons: One, to benefit from lower interest rates and thereby reduce the monthly payment; or to extract cash from their home whose price has risen. Lower mortgage payments leave homeowners a little extra spending cash every month. And a cash-out refi generates a pile of cash all at once, which can be used to remodel the home, buy stocks or cryptos to get rich quick, pay off maxed-out credit cards that carry 25% interest, make a down payment on a rental property or vacation home, or blow in other ways. Both types of refinancings provide extra oomph for consumer spending and the markets, including the stock and real estate market.

But interest rates have soared in recent months. The average 30-year fixed mortgage rates hit 5.02% yesterday, the highest since November 2018, when it peaked 5.05%, according to the daily measure by Mortgage Daily News. According to the weekly measure by the Mortgage Bankers Association today, the average 30-year fixed mortgage rate hit 4.90%, the highest since December 2018.

And applications for mortgage refis have collapsed. The MBA’s weekly Refinance Mortgage Applications Index, released today, dropped to the lowest level since March 2019, down 62% from a year ago, and down 82% from the peak in March 2020: 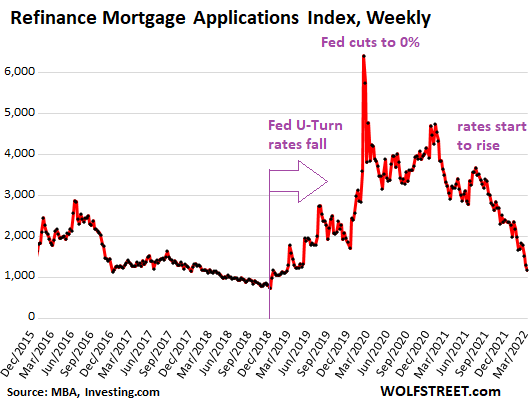 No-cash-out refis are motivated by locking in lower mortgage rates to get lower monthly payments. They’re directly driven by changes in mortgage rates. Mortgage rates having been so low for over two years, many homeowners have already refinanced and recent mortgage rates are far higher than what they’re paying, and refis are off the table.

Cash-out refis, which are motivated by the need or desire to extract cash, surge with rising home prices. And home prices have spiked in a historic manner. And people wanted to – and still want to – extract cash while they can without selling the home.

So at first, homeowners trying to extract cash blew off the increase in mortgage rates. But those refis have now also started to come down from high levels.

This was the first period that cash-out refis have shown “some effect from the headwinds of higher interest rates,” the AEI’s report said.

By contrast, according to the AEI, in week 12, non-cash-out refi volume had collapsed by 85% from a year ago.

Layoffs at mortgage lenders, yes but…

The biggest and most notorious layoffs occurred at Better.com, a Softbank-backed “tech” mortgage lender startup that at the peak had about 9,000 employees and that was supposed to go public via its merger with a SPAC, that was postponed and may have gotten scuttled by now. In December 2021, CEO Vishal Garg personally fired 900 employees, most of them in India, via a Zoom meeting that went disastrously viral. In early March, the company announced another round of layoffs, this time 3,000 people, also many of them in India.

PennyMac Financial Services, which had 7,000 employees in 16 locations, disclosed in regulatory filings in March a series of layoffs in five cities in California, totaling 236 people.

Movement Mortgage is laying off 170 employees, according to a report by HousingWire on April 4 citing sources.

Winnpointe Corp., doing business as Interactive Mortgage, would lay off over 50 employees by April, according to regulatory filings in February.

And other layoffs among mortgage lenders are occurring and will continue to occur in this very cyclical business. During the surge in mortgage rates in 2018, when the refi business also collapsed, thousands of people were laid off across the country.

But the numbers are relatively small in the overall scheme of things. And given the massive labor shortages everywhere, those folks are likely to find a slot fairly quickly.

The bigger impact on the economy & markets.

Cash-out refis are still going strong but are now also facing headwinds, and will face further headwinds going forward. Cash-out refis provide consumers a sudden pile of cash that may come with higher mortgage payments. And this pile of cash tends to get used for specific projects, such as a remodeling project, or paying off other higher-interest consumer debts, such as credit cards, and some of it is plowed into stocks and cryptos, and into down-payments for rental properties, second homes, vacation rentals, etc.

In this way, cash-out refis boosted not only consumer spending but also the money flow into other assets, including housing, and thereby helped boost those asset prices, including in the housing market. And the further decline in cash-out refis will remove some of that fuel.

199 comments for “Mortgage Refinance Applications Are Collapsing. What’s the Impact on the Economy & Markets?”