Mad scramble to lock in rising mortgage rates? A few markets went raging-mania hog-wild. Others not so much. In two, prices dipped again.

The Bank of Canada’s interest rate repression and QE during the pandemic have done a marvelous job on Canada’s epic housing bubbles that had started to wheeze. But crazy money-printing fixes everything.

But having gotten increasingly nervous about the raging-mania it fueled, the Bank of Canada started to exit some of its money-printing programs in early 2021, including its repos and short-term Canadian Treasury bills, and started tapering its purchases of Government of Canada (GoC) bonds. Since peak-balance sheet in March 2021, its assets have fallen by 16%, to C$484 billion. And on March 2, the Bank of Canada hiked its policy rate by 25 basis points. So what we’re looking at now is quantitative tightening: 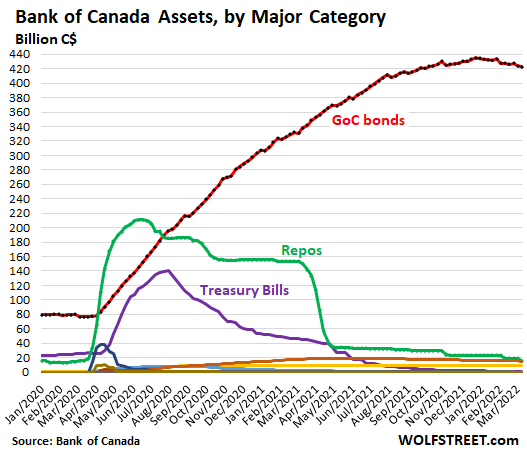 The Canada 10-year government bond yield jumped to 2.18%, nearly a percentage point higher than last fall. And the Canada Treasury 1-year yield jumped to 1.57%, up from 0.25% last fall. Shorter-term yields are important because of the large share of variable rate mortgages in Canada. Even Canada’s “fixed rate” mortgages are fixed for only a certain number of years, such as five years fixed, after which interest rates are reset.

And it seems, people were scrambling to buy something, no matter what the price, to lock in whatever mortgage rates they could still get before they rise even further (data via Investing.com): 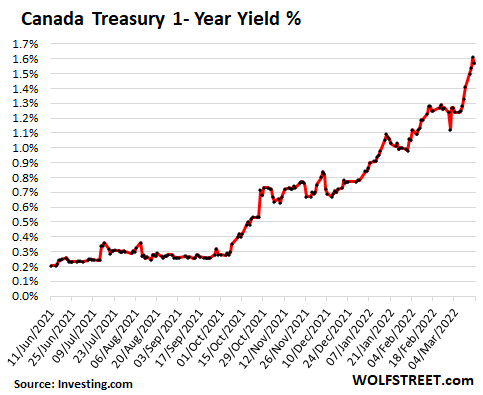 In two of Canada’s 11 largest markets, home prices dropped in February (Ottawa for the sixth month in a row, and Quebec City for the second month in a row), according to the Teranet-National Bank House Price Index, released today. In two other markets, home prices remained nearly flat (Calgary and Edmonton); and then there were some markets where prices went raging-mania hog-wild, such as in Hamilton.

Hamilton, Ontario, has become the number one most splendid housing bubble in Canada, surpassing Vancouver and Toronto. House prices spiked by 1.9% in February from January, and by 20.8% year-over-year, with the index being up 375% from January 2002.

Note how house prices dropped in late 2017 and then wobbled along the flatline until May 2020, when the BoC’s reckless money-printing and interest-rate repression kicked in and fired up prices like never before. Ah yes, the miracles performed by reckless central banks.

Now, the money printing has ended and interest rates are rising, and home prices are sky-high, so let’s see where this will be going over the next few years. I mean, this is a ridiculous chart: 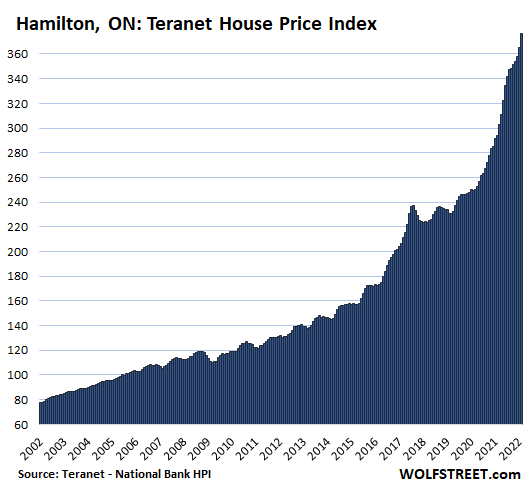 House price inflation. The Teranet-National Bank House Price Index, configured as a three-month moving average, is based on the “sales pairs” method that tracks the price of the same house each time it is sold over the years. In other words, the index tracks how many Canadian dollars it takes to buy the same house over the years, which makes it a measure of house price inflation.

In Greater Vancouver, house prices spiked by 1.8% for the month, and by 16.4% year-over-year. Prices had started to drop in the second half of 2018 and kept wheezing along until the BoC’s reckless monetary policies bailed them out: 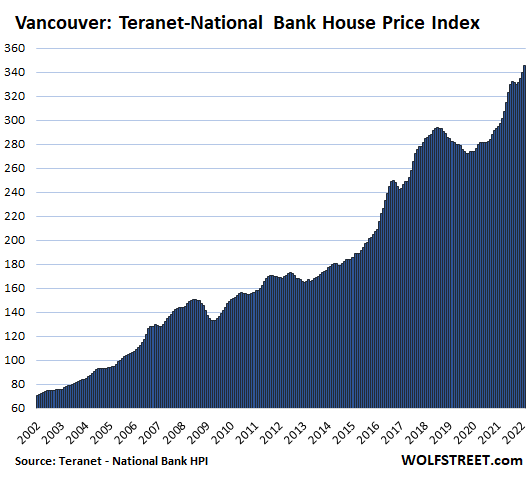 In the Greater Toronto Area, home prices jumped 1.9% for the month and by 20.8% year-over-year. There too, we see how the spike in 2017 unwound and how prices kept wheezing along until the money-printing miracle kicked in: 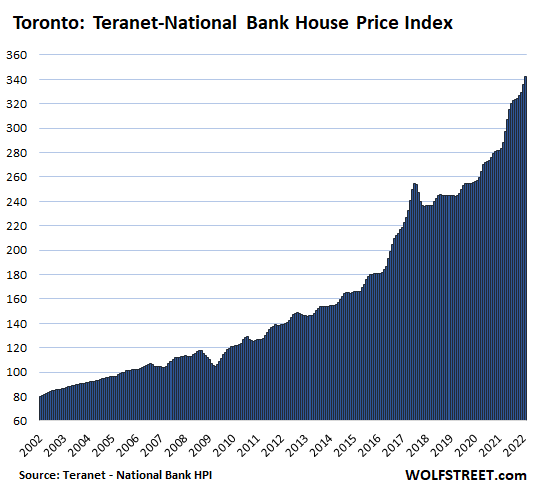 In Victoria, house prices jumped by 1.9% for the month, and by 22.5% year-over-year. Here too, prices had flattened from mid-2018 until the reckless money-printing by the BoC fired them up again: 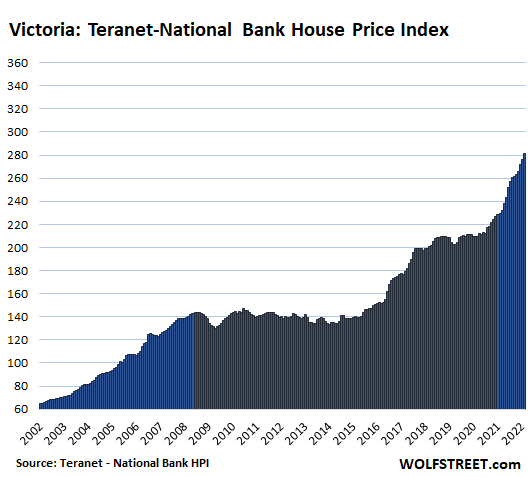 In Winnipeg, house prices rose 0.5% for the month and 12.1% year-over-year. The BoC’s miracle-cure pulled house prices that had essentially gone nowhere for seven years out of their slumber. But it now appears to have run out of steam: 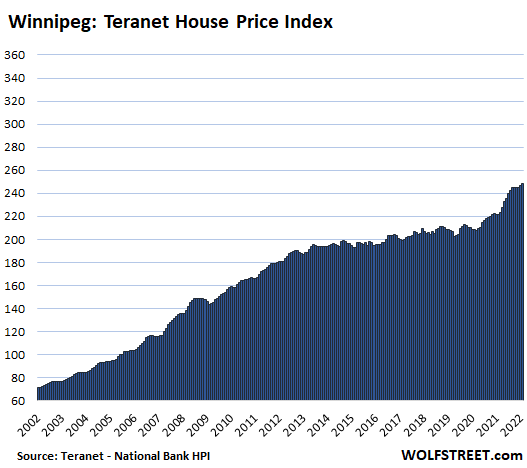 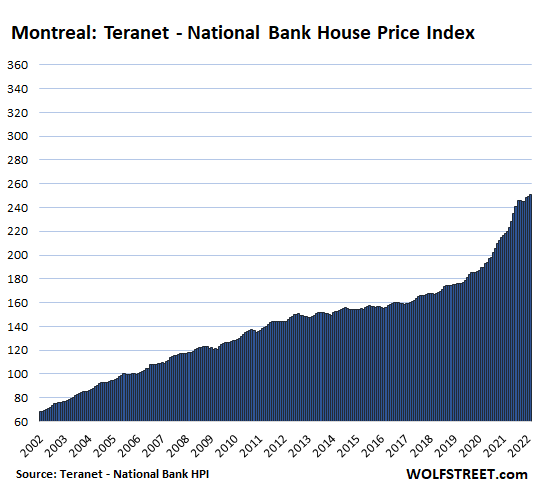 In Ottawa, house prices declined 0.2% for the month, the sixth month-to-month decline in a row. But prices were still up 16.2% year-over-year: 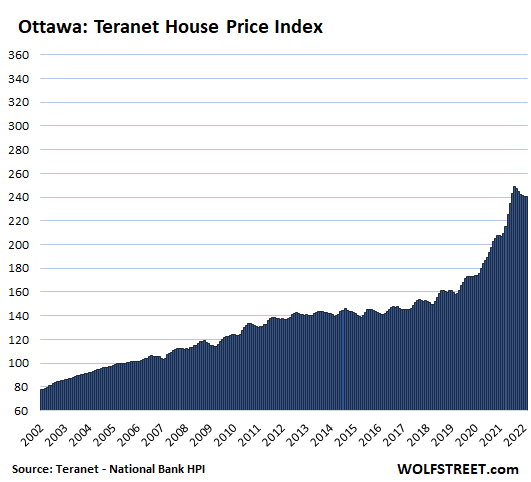 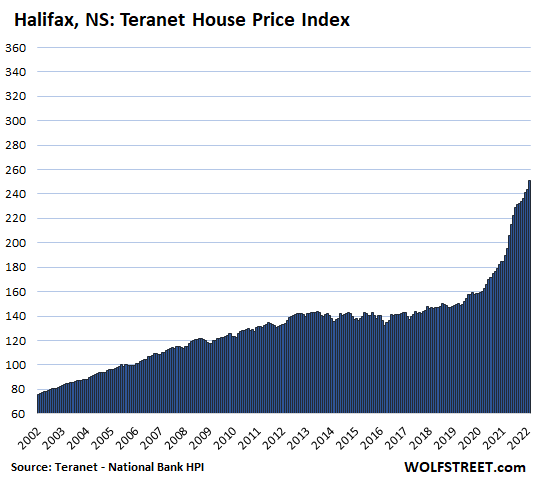 In Quebec City, house prices fell 0.4% for the month, the second month in a row of declines, whittling down the year-over-year gain to 8.3%: 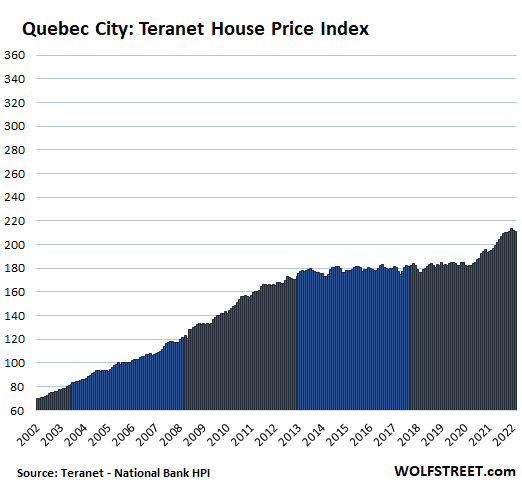 In Calgary, house prices were essentially flat for the third month in a row, which whittled the year-over-year gain down to 8.3% year-over-year. The oil boom-and-bust town had a phenomenal housing boom that ended in 2007. And today, the index is just barely above where it had been 14 years ago: 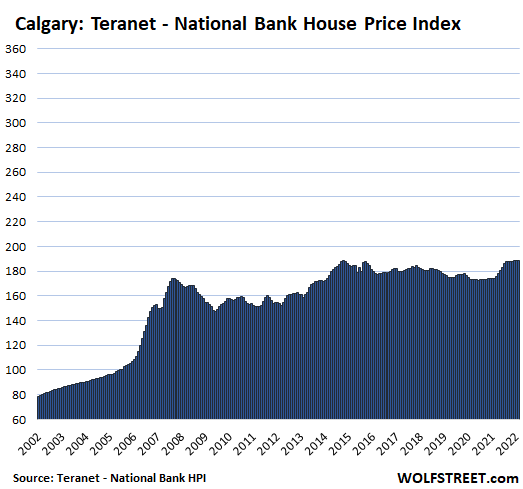 In Edmonton, Canada’s other oil-boom-and bust town, house prices have remained essentially flat for the seventh month in a row. Year-over-year, prices were up 5.2% but remain below the highs of 2007: 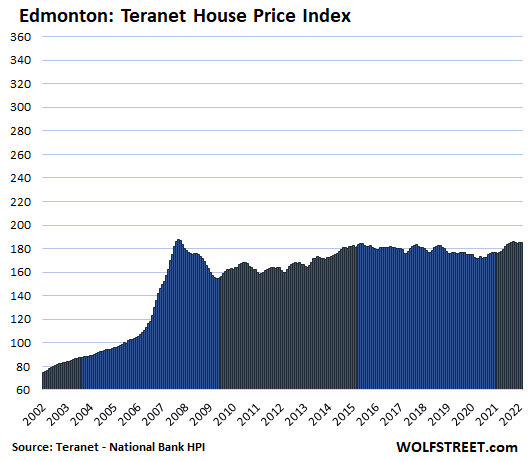 98 comments for “The Most Splendid Housing Bubbles in Canada, March Update, amid Jumping Yields, Bank of Canada’s Rate Hike and QT”