The Bank of Canada today hiked its overnight rate and its deposit rate each by 25 basis points, to 0.50%. It cited 5.1% CPI inflation that it expects to rise further and faces one of the worst housing bubbles anywhere – both of them fueled in part by two years of interest rate repression and money printing. It cited “further pressures on house prices” and the additional inflationary pressures from commodities markets following Russia’s invasion of the Ukraine.

“Interest rates will need to rise further,” the BoC said in the statement, in line with jawboning by BoC officials following the prior meeting in January.

“Price increases have become more pervasive, and measures of core inflation have all risen,” it said. “All told, inflation is now expected to be higher in the near term than projected in January.”

“The Bank will use its monetary policy tools to return inflation to the 2% target and keep inflation expectations well-anchored,” it said, after having not even tried to do that for well over a year and being a gazillion miles behind the curve.

Quantitative Tightening (QT) for the BoC refers to shrinking its holdings of Government of Canada (GoC) bonds. It confirmed today that QT is being planned but provided no details on the start date and the amounts of shrinkage.

The BoC has already unloaded essentially all Canada Treasury bills (purple line) and nearly all repos (green line). Its balance of GoC bonds has been roughly flat since October last year: 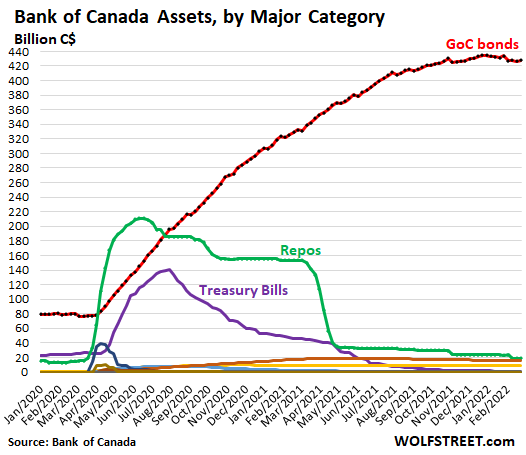 All assets combined on the BoC’s balance sheet, at C$494 billion, were down by 14.1% from the peak in March 2021, when the BoC began unwinding part of its stimulus measures, citing “moral hazard” as one of the reasons:

To keep its holdings of GoC bonds roughly flat, the BoC is reinvesting the proceeds from maturing securities to buy new securities. When QT starts, it will allow GoC bonds to mature and roll off the balance sheet without reinvestment. QT “would complement increases in the policy interest rate,” the BoC said.

“The timing and pace of further increases in the policy rate, and the start of QT, will be guided by the Bank’s ongoing assessment of the economy and its commitment to achieving the 2% inflation target,” it said.

BoC governor Tiff Macklem will give a speech tomorrow and may choose to flesh out his ideas about the coming QT.

The BoC sees the Canadian economy as “very strong,” and cited GDP growth of a red-hot 6.7% in Q4. It said that “economic slack has been absorbed.” It acknowledged that in January, Omicron dealt the labor market a “setback,” but in February, things were already recovering from it. “Overall, first-quarter growth is now looking more solid than previously projected,” it said.

This paves the way for another rate hike at the next meeting on April 13, and for more rate hikes this year.

The BoC appears to try to front-run the Fed, as it has done with ending QE and the liftoff rate hike. The Fed is on track to hike its policy rates on March 16, confirmed by Powell before Congress today. While the BoC and Powell cited the fallout from Russia’s invasion of the Ukraine as a new source of “uncertainty,” they both said that the resulting price surges in commodities were adding fuel to already red-hot inflation – and for both, the BoC and Powell, getting this inflation under control is now an official top priority.