Shares of cloud-software company and Buffett darling Snowflake [SNOW] collapsed by 30% initially to a low of $184 in afterhours trading before recovering a little and is now down about 25%, at $198 a share, after it reported an operating loss in Q4 of $152 million and a net loss of $132 million, on $384 million in revenues, peppered with disappointing guidance and the announcement of the acquisition of Streamlit.

Snowflake had a steamy IPO in September 2020, the largest in the US that year, in part fueled by Berkshire Hathaway which bought about 2.1 million shares in a private placement and 4.04 million shares from former Snowflake CEO Robert Muglia in a secondary transaction, both at the IPO price of $120 a share, for a total stake of 2.2% of the shares outstanding.

On the first day of trading following the IPO, shares opened at $245 and spiked to $319 intraday, before closing at $253 a share. They never got anywhere near the IPO price of $120.

After some sideways trading, shares spiked to $429 intraday on December 2020, amid enormous hoopla and head-scratching, in a moment that was typical for the craziest stock market ever, giving the company an inexplicable market capitalization of briefly $120 billion. Shares then sagged, but spiked again to $403 a share on November 16, 2021, after which they lost their footing, along with a whole slew of other highfliers.

From the intraday high on December 8, 2020, shares have plunged by 54.5%. At the afterhours price of $195, Buffett and other investors able to buy at the IPO price are still in the black, but not many stockholders are who bought the shares in the open market (data via YCharts): 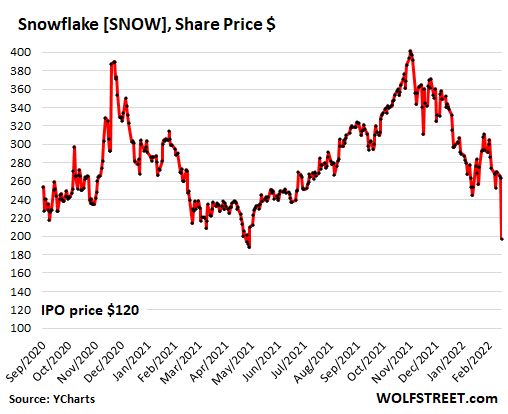 What rattled a lot of nerves today – with the stock price still at these nosebleed levels – was the guidance for product revenue growth of 65% to 67%, down from the actual growth of 102% in Q4, reported today. This was seen as competition in the data storage and analytics sector encroaching on Snowflake.

In reality, at these nosebleed levels, in a sobering market, anything can rattle nerves.

It probably didn’t help that Snowflake announced along with its losses and soft guidance that it had agreed to acquire Streamlit, without disclosing the terms. Streamlit is “a framework built to simplify and accelerate the creation of data applications,” it said. “With this strategic acquisition, the two companies will join forces to unlock the unrealized potential of data and make it easier to build beautiful applications.” Yes, very poetic. I thought so too.

Shares of cloud-software provider Salesforce.com [CRM], which owns 6.1% of Snowflake, dipped 0.7% in afterhours trading today and are down 33% from their high on November 9, 2021.

Shares of Twilio [TWLO], another cloud software company, have plunged by 64% from their high in February 2021.

Shares of C3ai [AI], which sells cloud-based AI software, have collapsed by 88% from their high in February 2021 – yes, that infamous February 2021 when something changed and the highfliers started coming unglued, one after the other. The plunge includes the 2.8% drop in afterhours trading today, after the company reported that its net loss more than doubled to $39 million in Q4, on $70 million in revenues.

It didn’t help that C3ai also announced that it had a new CFO, the third CFO since the IPO in December 2020. The old CFO had been with the company for only four months. Just another horror show of IPO hype turned into collapse, one of many since February 2021: 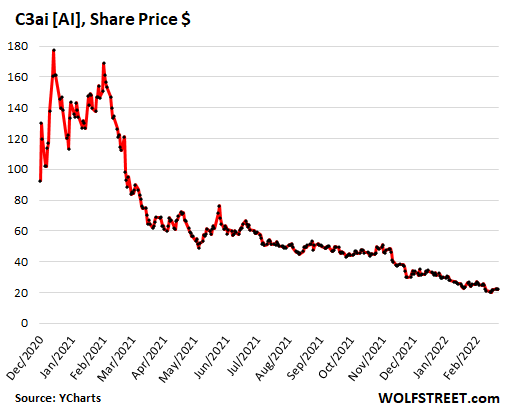