Businesses are confident they can pass on higher prices, plus some, to consumers.

The Producer Price Index for Final Demand tracks the input prices for consumer-facing industries whose output prices are then tracked by the Consumer Price Index which, WHOOSH, hit 7.9% in February, the worst since 1981. Today, the Bureau of Labor Statistics released the PPI Final Demand for February, which jumped by 0.8% in February from January, and by 10.0% from a year ago.

This marks the fourth month in a row that producer price inflation clocked in at around 10%, and all four months were by far the worst in the data going back to 2010 (red line). And it does not yet include the spike in fuel prices following Russia’s invasion of the Ukraine. That’s still to come.

Without food and energy input costs, the “core” producer prices rose by 0.2% for the month and by 8.4% from a year ago, now in the 8.5%-range for the third month in a row. This includes final demand for services, which rose 7.8% year-over-year (green line): 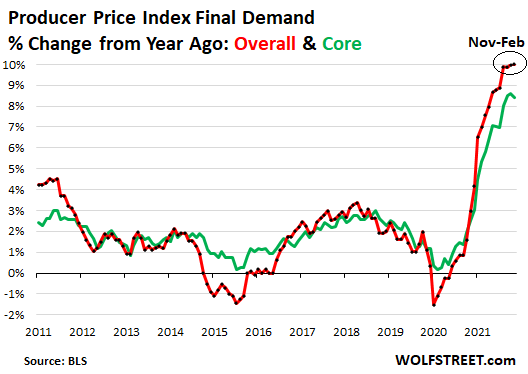 That the PPI for Final Demand has now been stuck at about 10% for four months in a row shows that producer price inflation is becoming entrenched at historically high levels.

Some components will rise while others will fall in a game of inflation Whac-A-Mole, particularly in the volatile commodities-based components for food and energy. But the persistence of this double-digit PPI inflation is quite something, compared to prior periods.

Over the past two years, the Fed has pissed away every good opportunity to end its money-printing spree, reduce its balance sheet, and start hiking short-term rates, before it ever got this far. Instead, it did everything it could to fuel inflation and created ridiculous excesses in asset prices, that have now started to come apart.

The Fed is meeting today and tomorrow and will decide to do way too little, way too late, to engineer some kind of soft landing that it actually could have engineered starting 20 months ago. Now inflation has become a raging fire at all levels, including with producer prices, and the Fed is just now trying to figure out how to pump less gasoline on the fire. Read… Why This is the Most Reckless Fed Ever, and What I Think the Fed Should Do to Reverse and Mitigate the Effects of its Policy Errors

129 comments for “Producer Price Inflation Gets Entrenched at 10%, Worst Level in the Data”