And then there were the raging-mania Convertible Bonds with a conversion price of $420, hahaha.

It’s amazing – I mean, not really if you’ve been through the dotcom bust – and brutal how these hype-and-hoopla stocks of money-losing companies are now getting abandoned and taken out the back and shot, one by one, after they’d been driven from already high levels to ridiculous levels starting in March 2020 when the Fed began throwing what would become $4.7 trillion at the markets.

The companies are still the same money-losing companies they were before. There was never any logical or fundamental reason for these stocks to get whipped from already high levels to these ridiculous levels. It was just a raging market mania, fueled by reckless money-printing and, as we’ve seen, by stimulus checks that went straight into the stock market.

But now these stocks are going to heck, though not it a straight line – and it has nothing to do with the Ukraine. And whoever ended up buying them directly or indirectly after they’d been whipped to ridiculous levels just transferred their wealth to whoever was selling this stuff.

I say “again” because a quarter ago, after the company reported earnings, shares collapsed 30% in afterhours trading, and by 41% the next day in regular trading. In terms of dollars, that was a huge drop, from $231 a share to $135 a share.

Dip buyers came in – the shares were “on sale,” and “40% off,” or whatever and it was just irresistible – but the bounce was small and soon turned into a slide, going lower and lower, interrupted by futile dip-buying.

Last night, DocuSign released another earnings report. At the close before the release, shares were at $93.88. And oops. In regular trading today, shares plunged 20% to $75.01, down where they’d been at the low of the crash on March 20, 2020, and back where they’d first been in December 2019 (the company’s IPO was in April 2018). They’ve collapsed by 76% from the high in August 2021 (more on that convertible bond offering in a moment): 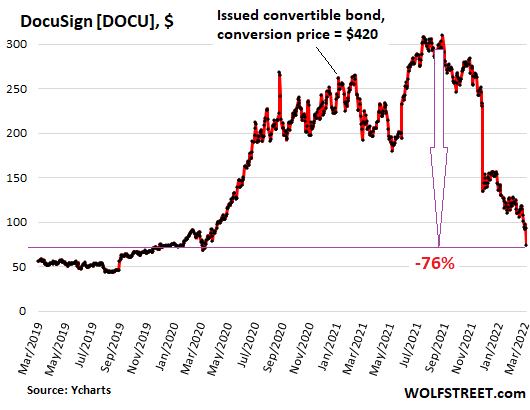 It gives the company a market value of nearly $15 billion – over seven times its annual sales in 2022 of $2.1 billion. And this is a company with a perfect string of six years of annual losses, amounting to $1.12 billion, including the loss it reported last night for 2022 of $70 million.

To cover up its net losses, as reported under GAAP, it is still touting non-GAAP fake profits made up of its own metrics, including fake non-GAAP earnings per share.

This toxic mix of actual losses, for a company that has been around for years and has $2.1 billion in revenues, and fake non-GAAP earnings should turn every investor off instantly.

But it doesn’t, apparently. What turned investors off was slowing growth in “billings” and slower-than-expected revenue forecasts.

The 40% crash last December was triggered when billings in Q3 had slowed to 28% year-over-year.

In Q4, reported last night, that growth in billings was down to 25%. And in its forecast for Q1, the company projects billings growth of 9%-11% year-over-year.

If you have signed contracts electronically in recent years, you have used DocuSign or a competitor. The meme to whip up the ridiculous stock price movement from March 2020 was that henceforth everyone and their dog would sign all contracts electronically via DocuSign, and even if that theory had worked out, the stock price would still have been ridiculously overpriced. But that theory hasn’t worked out. There are other companies that offer electronic signing of documents, a system that has been around for many years.

Turns out, DocuSign isn’t some miracle company that walks on water but a normal company with decent revenue growth and with a product that is, like most products, dogged by competitors. And it’s a company that is still losing a ton of money. So how much is a company like this worth? That’s the question that keeps getting answered as the stock plunges.

DocuSign also loaded up with debt, including convertible bonds. It issued the most recent one, a $600-million three-year bond, on January 13, 2021, when its shares were still riding high and higher and only the sky was the limit.

The bond doesn’t pay interest. Investors lent the company this money in hopes of being able to convert the bond into shares that hopefully would be well above $420.

If the shares are below $420 when the bond matures, bond holders would get paid face value of the bond, for no gain, and no interest earned for three years. So this is not a catastrophe for bondholders.