The massacre of the China ADRs. Dip buyers got taken out on stretchers.

Folks who’ve tried to ride up the Chinese miracle economy by investing in American Depositary Receipts (ADRs) of Chinese companies, such as Alibaba, Baidu, and JD.com, have ended up in a toxic devastating mess. Dip buyers, if they didn’t get out in a New York minute, were carried out on stretchers. Wall Street investment banks that had been instrumental in listing these ADRs raked in large amounts in fees. And the actual Chinese companies in China raked in the funds that investors in the US forked over to buy these misbegotten ADRs at the time they were offered.

There are over 200 China ADRs traded on US stock exchanges. Last year, before it all came apart, they still had a combined market cap over around $2 trillion. Today was another day when dip buyers in these ADRs got their heads handed to them. 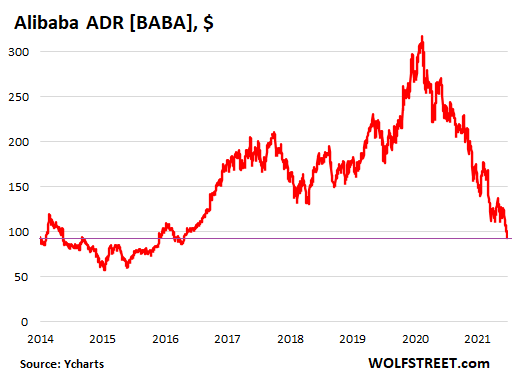 KE Holding, a platform for housing transactions, was the biggest plunger today among the biggest ADRs, collapsed by 23.9% today, to $11.01 and is down 67% from its first-day closing price on August 13, 2020.

Here are some of the biggest ADRs, the plunge today, and the plunge from their highs.

The Invesco Golden Dragon China ETF [PGJ], which holds these and numerous other ADRs, plunged 10.2% for the day to $26.73, and is down 69% from the peak in February 2021 – yup, that February again after which all kinds of stuff game unglued.

This $26.73 is an astonishing number: the ETF has now plunged below the price it had first reached in 2007, during the China stock market bubble in the run-up to the Beijing Olympics: 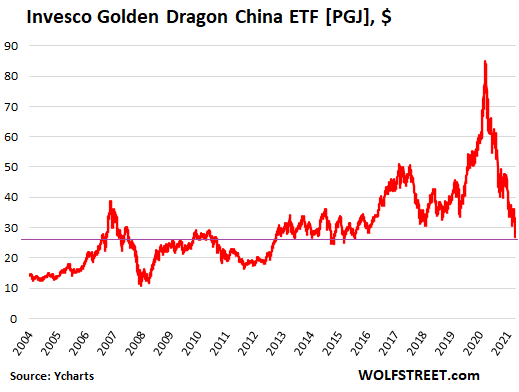 One of the triggers today…

Ecommerce giant JD.com reported fourth-quarter earnings today, which included a net loss of 5.2 billion yuan, on increasing operating costs, compared to a profit of 24.3 billion yuan a year ago. Revenue growth slowed, amid slower consumer spending in China. And the ADR got crushed today: -15.8%, and is down 51.3% from its high.

Last month, Alibaba reported its slowest revenue growth since the ADR was listed in the US. So there’s that: Slowing growth of consumer spending in China. And ecommerce giants are feeling it.

Another trigger today: The threat of delisting moved closer.

In the US, the SEC is cracking down under the Holding Foreign Companies Accountable Act, signed into law in late 2020. The Act bans trading of ADRs of foreign companies whose audit working papers cannot be inspected by the SEC for three years in a row. Under the Act, the companies need to use accounting firms or branches that the Public Company Accounting Oversight Board is able to fully inspect and investigate, as it does with US companies. If a company is not in compliance, its ADR can be delisted from US exchanges.

Today, the SEC issued an update about five companies, including some Chinese companies, whose accounting firms or branches cannot be adequately inspected. Those five companies were “provisionally identified” on March 8.

In the update today, the SEC said that these five companies have until March 29 “to contact Commission staff … if they believe they have been incorrectly identified, and should include evidentiary support with their correspondence.” If these companies cannot rectify the issue, the ADRs may be delisted.

None of the big Chinese companies I’m discussing here were mentioned in the SEC update, but the fact that the SEC is actually moving forward with this is jostling the animal spirits.

In China, regulators are cracking down on big tech and social media companies – the very ones discussed here, particularly Alibaba – as President Xi Jinping is trying to tighten control over the corporate giants.

Alibaba was made an example of in November 2020, when the government forced it to scuttle the mega-IPO in Shanghai and Hong Kong of its huge insurance and financial services unit, Ant Group. Prospects of the mega-IPO had inflated Alibaba’s ADR to new highs by late October 2020. Upon the news, shares plunged and continued to plunge. It taught Alibaba founder Jack Ma – and investors in ADRs – a lesson about who is boss in the house of Xi.

In 2021, the Chinese government tried to get ride-hailing giant Didi Global to put on hold the listing of its ADR on the NYSE until the audit working paper issues could be resolved. The Chinese government considered these audits a national security issue and fretted that audits would give the US government access to information about Didi’s clients in China.

But Didi went ahead anyway, and on June 30, 2020, listed the ADR. In response, Chinese regulators unleashed investigations and ordered the company to stop registering new users. The ADR collapsed, to $3.40 today, down 81% from the high on the second day of trading.

There were numerous such crackdowns on the biggest hype-and-hoopla industries, tech, social media, online gaming, and other internet companies for their monopolistic size and practices and other issues. There’s a crackdown on education tech companies that sell off-campus courses that caused the cost of education to skyrocket, thereby apparently discouraging Chinese couples from having more than one child.

Many of these companies issued ADRs in the US, and those hapless souls that got caught with China ADRs in their portfolios have been living through a nightmare.