Shares of DocuSign [DOCU], purveyor of eSignature services, collapsed by 30% in afterhours trading, from $233.82 a share to $164.50 a share in no time, taking its $46 billion in market capitalization down by about $14 billion. Since their peak in August, shares have plunged by 47%: 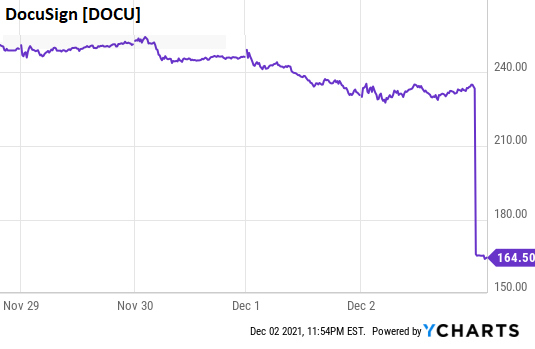 But shares didn’t collapse because the company had strung together a perfect score of annual losses during its four years as public company on top of the years before it went public. With today’s earnings report for Q3 – another loss – it is on track to perpetuate its perfect record of losses for the current year.

And shares didn’t collapse because they were trading at 23 times revenues, which is ridiculous, and they should have collapsed long ago and should have never gotten this high.

And shares didn’t collapse because the company has been touting non-GAAP measures that bedazzled investors with fake profits, when in fact its net income under GAAP was that perfect score of actual losses.

No, shares collapsed because the revenue in Q3 came in as expected, “billings” in Q3 came in short, the forecast for Q4 disappointed analysts, and “the environment shifted more quickly than we anticipated.”

DocuSign, in its Q3 earnings announcement afterhours on Thursday, forecast Q4 revenues in the range between $557 million and $563 million, when analysts were expecting about $574 million, according to Refinitiv.

And “billings” in Q3 increased by only 28% year-over-year, “as we were impacted by the shift in customer buying behavior,” CFO Cynthia Gaylor explained during the conference call.

In the conference call (transcript via Seeking Alpha), CEO Dan Springer explained: “As we moved through Q3 and into the second half of the year, we saw demand slow and the urgency of customers’ buying patterns temper.”

“While we had expected an eventual step-down from the peak levels of growth achieved during the height of the pandemic, the environment shifted more quickly than we anticipated,” he said

And “demand kind of started to come back to normalized,” he said and added some mea culpas about not executing in this normalizing environment.

Despite the 47% drop in the share price since the peak in August, they remain ridiculously valued, compared to the company’s revenues, revenue growth, and endless losses.

104 comments for “DocuSign, Worth $46 billion at 4 p.m., Plunges 30% Afterhours as “the Environment Shifted More Quickly than We Anticipated””