The Pandemic wreaked havoc on seasonal patterns; and “seasonally adjusted” numbers often misfired. We knew that since mid-2020. Today some of it was resolved.

The employment report, released today by the Bureau of Labor Statistics, was a shocker in the positive sense. Markets had counted on terrible numbers to derail the Fed’s tightening strategy and derail the rate hike in March. But when the strong numbers came out, yields spiked, with the 10-year yield up 12 basis points to hit 1.93%, the highest since December 2019.

And there was another thing. The pandemic has wreaked havoc on the normal seasonal changes in the US economy: Home sales, retail sales, initial unemployment claims, the number of people who are working, etc. These economic activities fluctuate hugely and predictably with the seasons every year.

Seasonal adjustments, based on the normal seasonal patterns, are designed to smooth out the data and allow for month-to-month comparison. This worked fairly well until it didn’t: When the pandemic screwed up the normal seasonality of the economy.

Today it was the jobs report. The Bureau of Labor Statistics applied new seasonal adjustment factors to the January data and going back. In addition, the BLS, as it does every January, revised the data of the survey of employers (Establishment Survey) as a result of its annual benchmarking process. And the Households Survey data was revised for updated population estimates. This solved some of the bizarre distortions we have seen in the “seasonally adjusted” data last year, in both directions.

We’ll get into this in a moment. But first we get into the blow-away jobs data, “seasonally adjusted.”

Employers reported that they added 467,000 people to their payrolls in January, seasonally adjusted. December job gains were revised up hugely, and for the past three months combined, employers added 1.62 million jobs. This brought the total number of employees on the payrolls to 149.6 million, still down by 2.87 million from February 2020 and by about 8 million below pre-pandemic trend (green line).

Households reported that the number of working people, including the self-employed and entrepreneurs that are not tracked by the Establishment Survey, jumped by 1.2 million people in January, and by 2.94 million people over the past three months, bringing the total to 157.2 million people who are now working. This was still down by 1.69 million from the total in February 2020, and was about 6 million workers below pre-pandemic trend (red line). 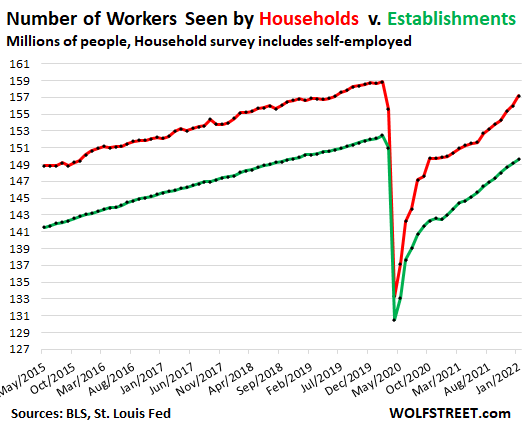 The labor force – defined as people who were either already working or who were actively looking for a job in the four weeks prior to the survey of households – jumped by 1.39 million people in January from December, to 163.7 million.

In addition, 1.8 million people were not included in the labor force because they couldn’t look for a job during the reference period due to the pandemic, up from 1.1 million people in December.

This leaves the labor force down by 1.4 million people from February 2020 and by 3.3 million from pre-pandemic trend, even as employers were furiously trying to fill an enormous 10.9 million job openings. 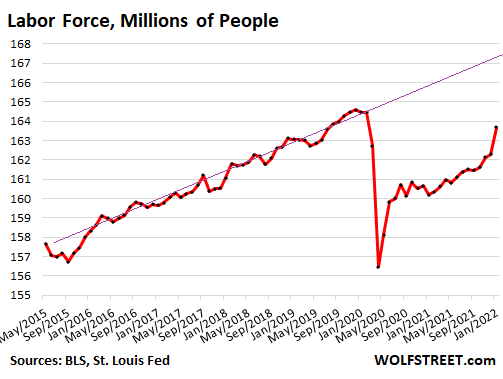 The unemployment rate, after the adjustment of the population data for January that brought the labor force up, deteriorated a tiny bit, to 4.0% in January, from 3.9% in December.

Average Hourly Earnings jumped by 23 cents in January from December to $31.63 per hour, and were up 5.7% from a year ago. These historically large gains in wages were not nearly enough amid the raging inflation. With CPI inflation at 7.0%, the purchasing power of labor, as measured by average hourly earnings, fell further behind. 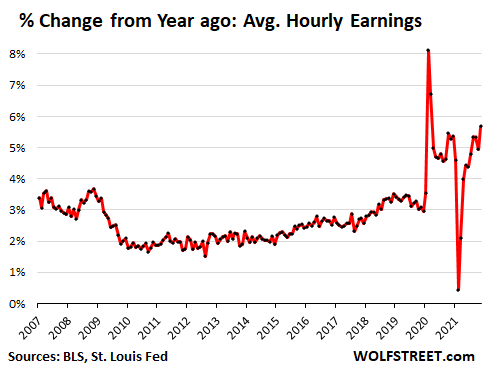 The Seasonal Adjustments to a seasonally wild economy.

Two categories are particularly seasonal: jobs in retail and jobs in education.

You can see from the purple line how the not seasonally adjusted patterns changed during the pandemic, including in November and December 2021, when the number of jobs spiked less than in prior years, as more employment had shifted to ecommerce operations that count as jobs in warehousing, transportation, etc., and that therefore in January, employment in retail fell less than in prior years.

These are very large numbers — over 10% of all jobs are in retail and over 10% are in education — for a total of over 30 million, or over 20% of all jobs. And so even small errors in the seasonal adjustments have a large impact on the overall numbers: 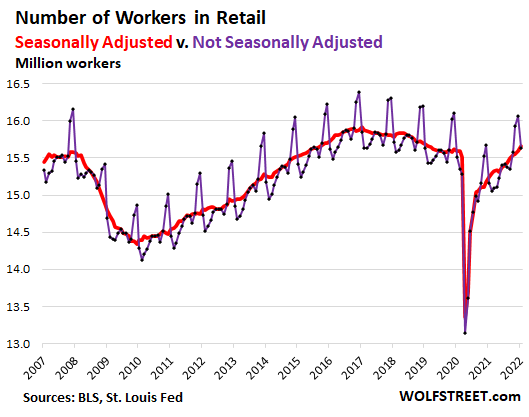 Education employment dives twice a year every year: Over the summer and to a lesser extent in December and January. Workers in education are employed by:

In total, 13.85 million people were employed in education in January, not seasonally adjusted, a drop of 558,100 from December.

The purple line, not seasonally adjusted, shows how the pandemic changed the patterns, including a smaller dive over the summer, and a smaller recovery afterwards, and what appears to be a permanently lower pattern, as educational institutions have trouble hiring, and as college student enrollment has dropped: 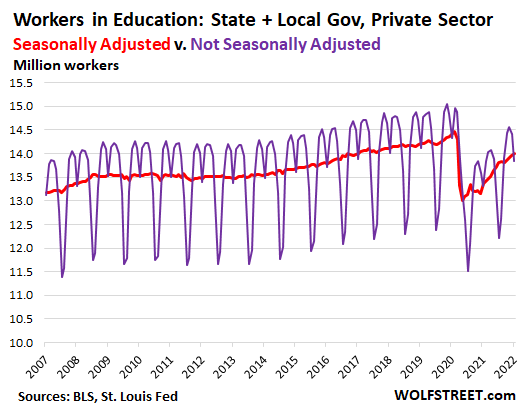 In terms of overall employment, the BLS changed the factors for seasonal adjustments going back over the data in 2021 in both directions quite substantially:

Note in the right column the massive down revisions for May, June, and July (totaling -974,000), and the massive up-revisions for November and December (totaling +709,000. And these revised seasonally adjusted numbers make a lot more sense than the numbers we got at the time (table from the BLS report): 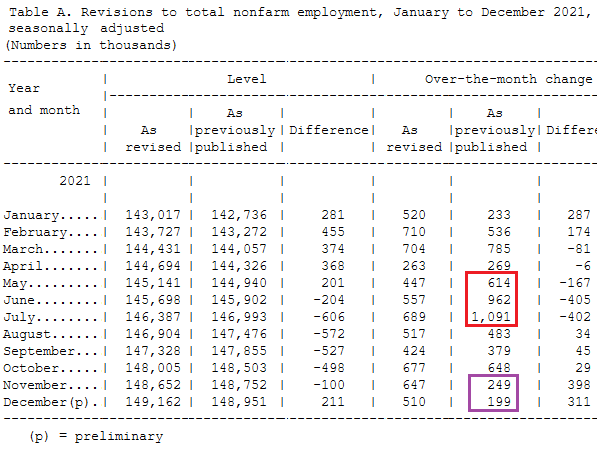