Even Powell is now citing this mind-boggling data to justify tightening.

The persistence of the mind-boggling phenomenon of a labor shortage, and the accompanying shift in power from employers to workers was documented today by the JOLTS data from the Bureau of Labor Statistics. Based on a monthly survey of 21,000 nonfarm businesses and government entities, it estimates how many job openings there were at the end of the month, how many people companies hired during the month, how many people quit voluntarily such as for switching jobs, and how many people were laid off or were otherwise involuntarily discharged.

Powell has started to mention these astronomical results of the JOLTS data – specifically the record job openings and the record quits – as aspects of the “very, very, very strong labor market” that is “historically tight,” as said at the FOMC press conference to prepare markets for the tightening that would include “a substantial amount of shrinkage” of the balance sheet. And today’s release was once again a doozie.

The total number of workers who were laid off or discharged involuntarily in December by companies or government entities fell to 1.17 million (seasonally adjusted), a record low in the data going back to the year 2000. In the private sector alone, layoffs and discharges dropped to a record low of 1.1 million, down by 41% from December 2019: 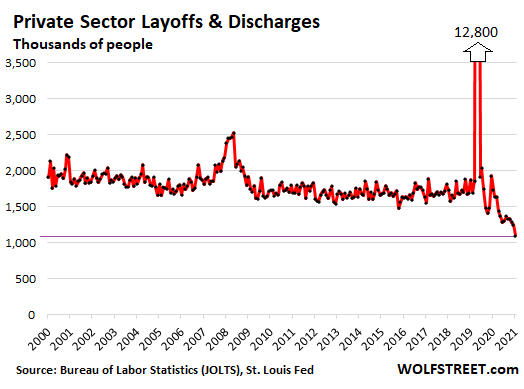 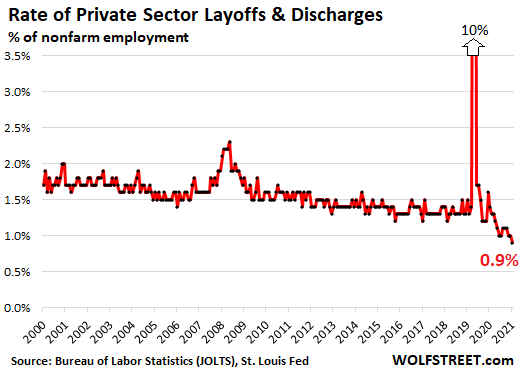 The number of workers who voluntarily quit jobs in December, at 4.34 million, remained in the astronomical zone since last June, and was up 24% from December 2019. The private sector accounted for over 95% of total “quits.”

These “quits” are people who decided to quit at their employer to work for another employer with more pay and/or better working conditions, where they became a “hire.” Or they decided to exit the labor force entirely to retire on their stock market laurels. Or they decided to take care of the kids, or to get rich quick with cryptos, or to take the plunge into the unknown and start their own businesses amid an explosion of new business. 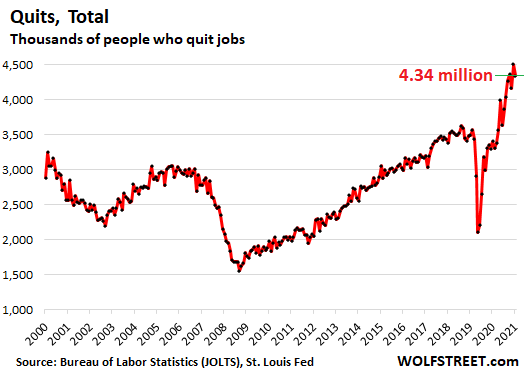 These record numbers of quits over the past six months show that workers have discovered their power in the labor market – and they’ve already found, or a confident in finding better opportunities somewhere else.

The high number of quits also shows how aggressively employers are trying to hire people away from other employers, thereby poaching each other’s workers by offering better pay, benefits, and working conditions, and creating massive churn.

It is via this mechanism of churn that pay increases spread around the economy as each employer has to deal with the new reality when a worker leaves and the position needs to be filled, and as employers implement pay raises to retain workers. 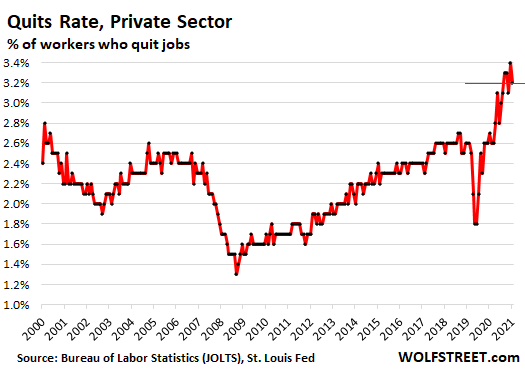 The number of hires was held down by the tightness of the labor market and the difficulties companies face in this labor market trying to hire people, as they often have to entice people who are working somewhere else with better pay and benefits: 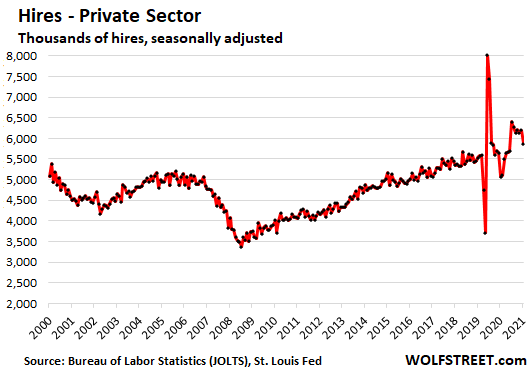 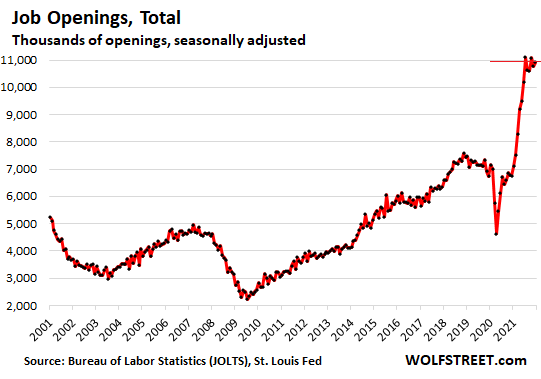 198 comments for “Layoffs, Quits, Hires, Job Openings: The Phenomenon of Labor Shortages and the Power-Shift from Employers to Workers”