That they lost gobs of money every year didn’t matter until suddenly it did. But now there’s a new challenge heading for them.

On its first day of trading after its IPO in June 2020, shares of Vroom [VRM], an online-only used-vehicle dealer that has lost piles of money every year, more than doubled from its IPO price of $22 a share, amid enormous hype on Wall Street. It then proceeded to skyrocket to $73.87 by September 1, 2020. And then the hype started to leech out, and on Friday, shares closed at $7.06, down 90.4% from the closing high (price data via YCharts): 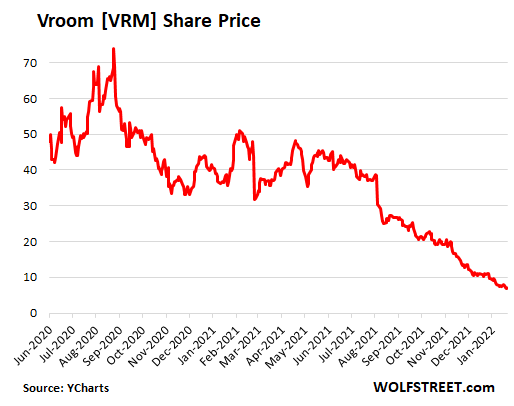 Looking at a chart like this gives me the willies because it proves that there is something seriously wrong with how money-losing companies in well-established profitable industries, such as selling used vehicles, are hyped to retail investors and even asset managers as disruptors that are going to change the world, and these disrupters don’t need profits because who cares about profits when you’re changing the world.

And then the Big S hits the fan, after Wall Street banks and the insiders made huge amounts of money. That’s when other folks get cleaned out, having bought into the hype, and some unknowingly by having invested in funds that held these shares. This is now happening with hundreds of companies.

Carvana [CVNA] is the original online-only used-vehicle dealer that went public in April 2017, at an IPO price of $15 a share, with miraculous performance. It was very effectively hyped, and it lost money in each of the past six years, and in increasing amounts – the more it sold the more it lost – but no matter. 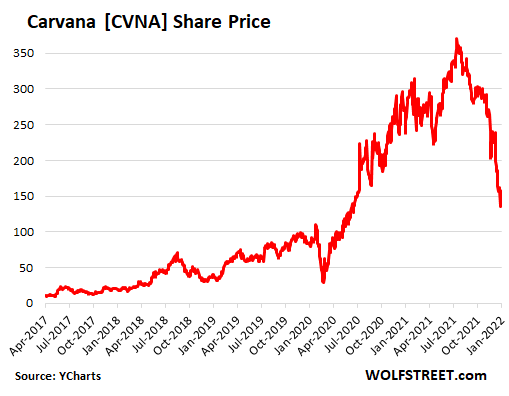 Selling used cars is very profitable – if you understand the basics, including not overpaying for cars. It’s profitable even during tough times, when new vehicle sales struggle.

For the past 18 months, the industry has been in the hottest used vehicle market ever, with retail prices spiking to silly levels, and with people paying new-vehicle prices for two-year old used vehicles. This has generated huge per-vehicle gross profits for dealers across the board.

But Vroom and Carvana still lost money. They weren’t created to profitably sell used vehicles. That was never the plan. It would have made them look like one of the other fossils. The plan was to grow no matter what, while burning investor cash, and to bedazzle investors with that growth, and distract them from the miserable bottom line. They were created to enrich Wall Street banks and insiders.

They sell cars online and then deliver the vehicles to the buyer, or the buyer can pick them up at a giant vending machine. And that makes sense if you sell your vehicles for the right price so you can make money.

But to get that limitless growth, they buy cars in large quantities at prices that are too high for their aggressive selling prices, and the gross profit is too thin for the company’s cost structure, and the result is that they lose money year after year. Anyone can sell used cars if the purpose is to lose money.

The largest used vehicle dealer in the US, CarMax – it has been around for decades with numerous large stores around the country and has been very profitable – also sells cars online, and you can even come in and test drive it, which is a great idea with used cars, and if something is wrong, you can unwind the deal on the spot and don’t have to jump through the hoops of unwinding a completed deal of a car that is already in your garage.

The retail operations of rental car fleets, such as Enterprise, also sell their cream puffs online or at their many retail stores, after they come out of rental service. Rental fleets have the advantage that they bought the vehicle new at a huge discount directly from the automakers and know what it has been through.

So now there is another complication waiting for the industry – and the good ones are going to be able to deal with it. But for Carvana and Vroom, that are already losing money in the hottest used vehicle market ever, this is going to be an opportunity to lose huge amounts of money.

Used-vehicle wholesale prices have spiked by ridiculous amounts. In December, the Manheim Used Vehicle Value Index was up 47% from a year ago. But Manheim, the largest auto auction operator in the US, pointed out that the underlying dynamics that already started to shift at the end of November, shifted further by the end of December: 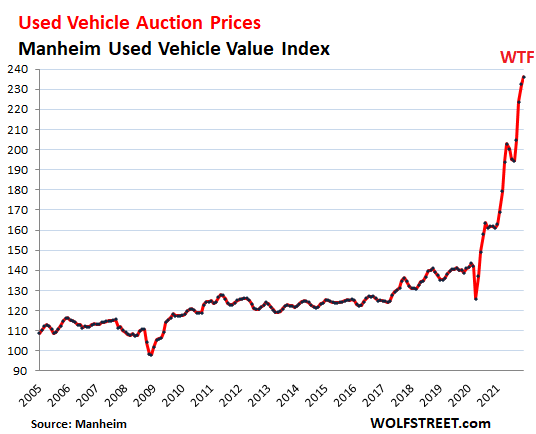 Dealers around the country have bought their inventory at these ridiculous prices, and they have passed on those price increases because consumers paid no matter what. But they also still have a lot of this ridiculously priced inventory sitting around. And in January, they’re still paying those ridiculous prices at the auction.

Used-vehicle retail volume has declined but not because there was a shortage. Supply of used vehicles in terms of the number of vehicles on dealer lots hit 51 days in December. In 2019, supply had averaged 48 days. So in December, there was above average of supply. This occurred because used retail unit sales dropped 5.6% from December 2020. 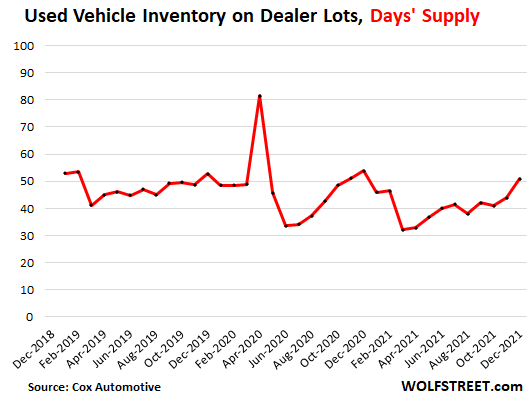 These dynamics indicate that price resistance may be in the process of coming back, that enough car buyers may be getting second thoughts about those ridiculous prices. And if sales slow further, dealers will once again compete on price, but now they’re sitting on this high-priced inventory. Even if prices unwind only a little bit, there are some big losses waiting to happen for used vehicle operations that already have a problem with paying too much for vehicles, such as Vroom and Carvana, our internet-only darlings that cannot make money even in the best of times, and are superbly positioned to get run over by those developments.