Stock market leverage, the big accelerator on the way up, and on the way down.

The tip of the iceberg of stock-market leverage that we can actually see is margin debt, which is reported on a monthly basis by FINRA, based on data reported by its member brokers.

Other forms of stock-market leverage occur in the shadows, such as Securities Based Lending (SBA) that isn’t tracked and reported in a centralized manner, though some banks choose to disclose it quarterly or annually.

There is leverage associated with options and other equities-based derivatives. Then there is leverage at the institutional level such as with hedge funds, which doesn’t show up until a fund implodes, such as Archegos, and everyone gets to pick through the debris.

The only form of leverage we can see monthly, margin debt, gives us an indication of the direction of the much larger overall stock market leverage.

So, recall that in November, a major fiasco happened: Despite all kinds of bullishness out there, stocks as measured by the S&P 500 index didn’t rise. I mean, what affront! They actually ticked down a smidge for the month, -0.8%. But beneath the surface of the indices, all kinds of mayhem broke out, with lots of the most hyped stocks plunging. 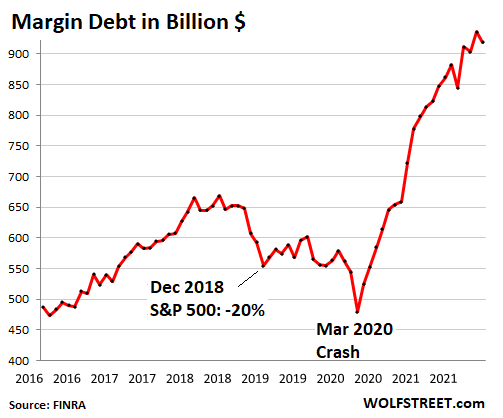 In percentage terms, there were only two months when the year-over-year percentage increases were even higher: February and March 2000, on the eve of the dotcom crash: 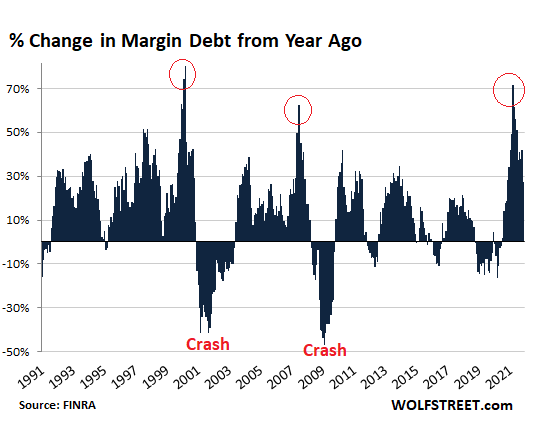 This explosion of margin debt and broader stock market leverage cannot predict when the market will crater. It shows that as long as margin debt continues to balloon, newly borrowed fuel is thrown on stocks.

What this explosion in margin debt does predict is that when the market falls enough to scare investors, or worse, falls enough to force investors, into selling stocks to reduce their leverage, the selling will be made worse by this effort to unwind margin debt, which pushes down prices further, and triggers further margin calls and forced selling into a falling market in order to pay down margin debt.

Over the long-term, given the declining purchasing power of the dollar, it’s not the absolute dollar amounts of the total balance that matter, but the steep increases in margin debt before the selloffs, and the exponentially steep increase over the past 20 months. This market doesn’t need more alarm bells – they’re already clanging and jangling all over the place – but here we are: 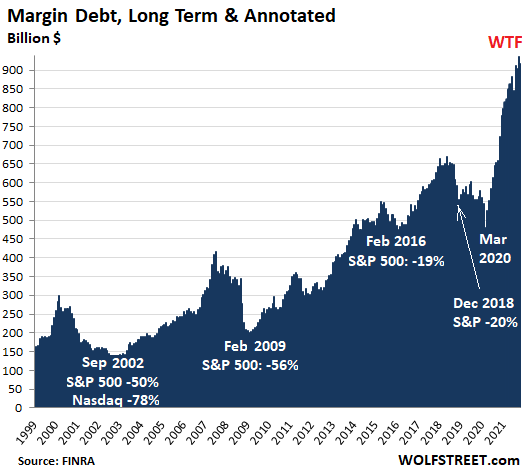 304 comments for “Stocks Don’t Need More Alarm Bells, They’re Already Clanging and Jangling All Over the Place. But Here we Are: Leverage”