But on the surface, stocks still look hunky-dory.

It’s amazing how individual stocks, at the tippy-top of the biggest stock market bubble in modern times, are getting taken out the back one by one to be crushed, but without denting the overall indices all that much.

The stock market bubble was driven by $4.5 trillion in QE in the US alone, along with many more trillions by other central banks, and it was driven by interest rate repression, even has inflation has been surging to multi-decade highs, not just in the US but globally, and not just in goods, but now also in services, particularly housing, such as rents.

After a decade of QE being relatively benign on the inflation front, giving central bankers a false sense of confidence, it has finally broken the dam, and inflation is now surging everywhere, and it’s spreading across the economy.

Central banks are now no longer denying it, and some have raised rates, and others have ended QE.

Each stock that crashes has its own story for the crash. What they have in common is that they were all ridiculously overvalued, and investors knew it, and they kept hanging on till the last moment to ride them up all the way, but they were sitting all bunched up near the exits, and when the signal came, they all rushed out together, causing those shares to collapse. But even at those much lower valuations, those stocks are still ridiculously overvalued.

DocuSign, a company that still had a market cap of $46 billion on Thursday at the close of regular trading, valuing the company at 20 times its 12-months trailing revenues, despite having lost money every year of its existence, plunged 42% on Friday during regular trading, after it had announced that its revenue and billings growth would slow as “the environment shifted more quickly than we anticipated.” Shares are down 57% since September 3rd. Yet, shares are still ridiculous overvalued, trading at 14 times revenues.

Zillow had some good news, well sorta, on Friday by promising a big share buyback as it is unwinding its house-flipping business and selling the thousands of houses it got stuck with largely to institutional buyers. Upon the announcement, Zillow’s shares [ZG] jumped 10% on Friday, which whittled down their collapse since February to 71%.

Opendoor [OPEN], another algo-powered house-flipper, has collapsed by 61% since the peak in February this year, only months after its IPO via merger with a SPAC in December 2020.

Compass, which bills itself as a tech company but is a real estate brokerage, went public in April 2021. Over the eight months since then, its shares [COMP] have collapsed by 53%. Hapless dip buyers got steamrollered. It lost money every year under GAAP. If a brokerage cannot make money in the hottest real estate market ever, when can it make money? It still has a market cap of nearly $4 billion.

Redfin [RDFN], another real estate brokerage that cannot figure out how to make money in the hottest housing market ever, experienced a crazy 730% spike in share prices from March 2020 to February 2021. Much of that spike has now been unwound, with shares down 60% from the peak. Easy come, easy go.

IPO stocks are getting crushed.

The Renaissance IPO ETF [IPO], which tracks the largest and most liquid newly-listed stocks of US companies and whose biggest holdings are Moderna, Snowflake, Uber, Cloudflare, and Zoom Video, has plunged 24% since the peak in February. But some of its biggest holdings have gotten totally crushed.

Moderna [MRNA] has plunged 38% since the peak in August 2021, including a 31% two-day collapse in early November.

Snowflake [SNOW] is trading at an absurd valuation of 125 times revenues, despite huge massive and increasing net losses every year. It’s down only 16% since mid-November, after having bounced back partially from the 14% plunge on December 1. This is a prime candidate for a massive one-day plunge, followed by dip-buying, followed by dip buyers getting taken out the back and crushed.

Uber [Uber] has plunged 48% since April, which reduced its market capitalization to $70 billion. This is a still ridiculously overvalued global taxi enterprise that is now 13 years old and has lost $36 billion since 2016 under GAAP.

Cloudflare [NET] plunged 28% from the peak three weeks ago. With a market cap of $51 billion, the stock trades at a ridiculous 88 times revenues though the company has lost money every year. So now, shareholders get to look forward to that whiff of disappointment that crushed DocuSign on Friday.

When shares of companies that have been around for years and that have never made money are trading at ridiculous valuations of 88 times revenues, well anything can crush them.

Zoom Video [ZM] has plunged 67% from the peak of $568 on October 19, 2020 to $183.92 on Friday. The descent included a 16% plunge on August 31, followed by a little dip-buying, followed by massive drops. Despite this massive haircut, the stock still trades at a ridiculous 15 times revenues. 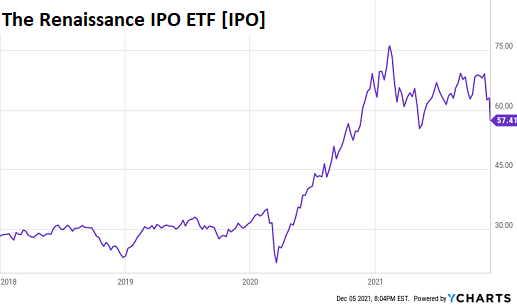 The ARK Innovation ETF [ARKK], that chases the latest and greatest high-flyers from online shopping to crypto exchanges, has plunged 41% since the peak in February. 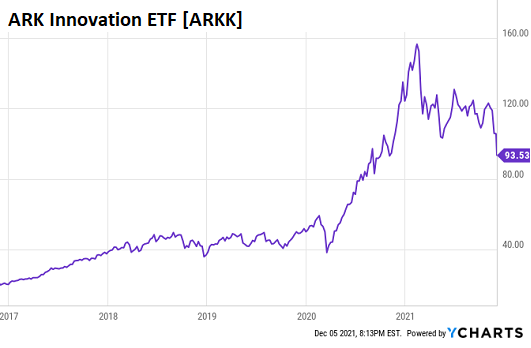 The entire complex of US-listed Chinese companies has cratered.

From Alibaba on down, they have all done this to get around Chinese regulations. And investors have been bamboozled into buying ADRs of mailbox companies.

During the Trump administration and now during the Biden administration, these listings have come under attack from US regulators as well, including because companies fail to conform to US disclosure rules.

These companies are now pressured from both sides to delist the ADRs. And prices have collapsed.

Didi, the Chinese version of Uber, listed its ADR in the US via an IPO in June this year at the IPO price of $14 a share. After briefly reaching $18 a share, the ADR has since collapsed to $6.07, down 66% from the post IPO peak. Didi is now trying to figure out how to delist the ADR in the US.

Investors who’ve been trying to out-hold these collapses, or who’ve tried to “buy the dip,” have gotten screwed over and over again.

The price of the Invesco Golden Dragon China ETF [PGJ], which tracks these Chinese ADRs listed in the US – it’s largest five holdings are Baidu, Nio, JD.com, Alibaba, and Pinduoduo – plunged 9.3% on Friday and has collapsed by 75% since the peak in February 2021.

PGJ shows what kind of bubble-nonsense these ADRs were and still are, how they’ve been hyped by Wall Street, and how people who believed that stuff got fleeced, despite some of the head-fake bounces and dip-buying on the way down: 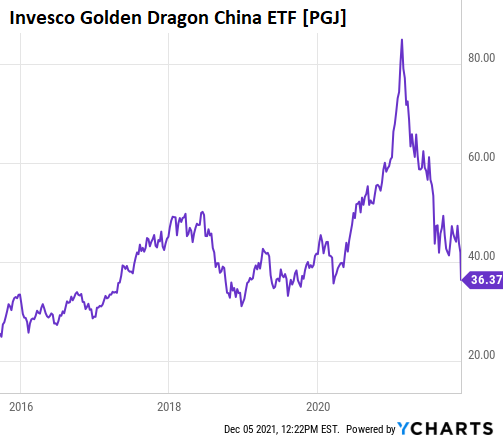 These were a few examples.

The amount of crushing going on beneath the surface has been phenomenal. After the one-day or two-day plunges, there was dip buying, but these dip buyers had to unload quickly, or else they got crushed, and so, if they could, they unloaded to the slower dip buyers, and they got crushed.

Tesla, which dropped 6.4% on Friday, is down nearly 19% from its 52-week high in early November, as Elon Musk has unloaded over $10 billion of his shares over the past few weeks.

The Russell 2000, which tracks small stocks, has dropped 12% from its peak.

Most of this mayhem playing out among these individual stocks and some of the ETFs is band-aided over by some of the biggest stocks that have held up better. For example, Microsoft is down only 6% since mid-November. Apple barely dipped after hitting a new high on December 1. Google is down only 4.9% from its 52-week high in mid-November. And the Nasdaq has only dropped 6%, including the 1.9% drop on Friday. And so on the surface, it still looks hunky-dory.

282 comments for “Mayhem Beneath the Surface of the Stock Market”