Inventories at new and used auto and parts dealers, measured in dollars, declined to $145 billion in October, the lowest since the spring 2012, down 23% from October last year, and down by 40% from the months just before the pandemic, according to data released by the Commerce Department on Wednesday.

This drop in dollar inventories came despite the 44% year-over-year spike in wholesale prices in used vehicles, and the widespread shift to higher-end new vehicles by automakers prioritizing their most profitable models, which led to an 18% increase in the Average Transaction Price.

Those historic price distortions inflate dollar-denominated inventories by massive amounts, and they would have caused these inventory numbers to balloon in a historic manner. But the number of actual vehicles in inventory has collapsed – we’ll get to that in a moment – and even this surge in vehicle prices couldn’t cover it up. 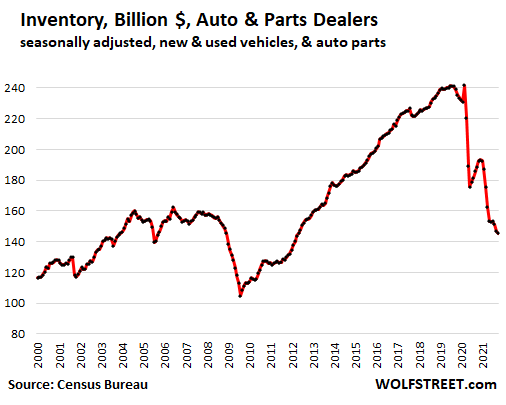 And the inventory-sales ratio – dollar-inventories divided by dollar-sales, which cancels out the impact of price increases – dropped again in October to the historic lows of April and May, the lowest in the data going back to 1992: 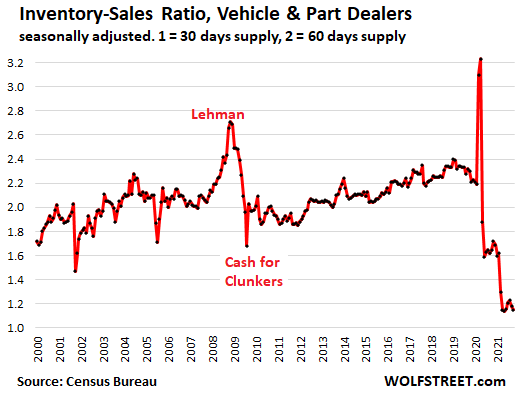 In the chart above: After the Lehman moment in late 2008, new vehicle sales plunged, and the US was suddenly awash in inventory, and the inventory-sales ratio spiked. The Cash-for-Clunkers program in July 2009 briefly boosted sales and thereby pushed down the inventory sales ratio for one month.

The collapse in sales during March and April 2020 triggered an even bigger spike in the inventory-sales ratio. And the subsequent supply shock and simultaneous stimulus-fired demand shock have had persistent effects.

The number of vehicles in inventory collapsed.

Just to clarify: The above was about inventories of combined new and used vehicles and parts, in dollars. The below is just new vehicles, in units. And further below, we’ll get into used vehicles in units.

The average number of days it took dealers to sell a new vehicle in November dropped to the lowest on record, according to Cox Automotive, as an increasingly large portion of vehicles are ordered by customers and are spoken for when they finally come off the carrier, and there is effectively very little inventory on dealer lots.

Given the tightness in supply, sales have plunged. In November, the seasonally adjusted annual rate of sales of new vehicles plunged by 19% year-over-year and by 25% from November 2019, according to data from the BEA, as there was little inventory to sell: 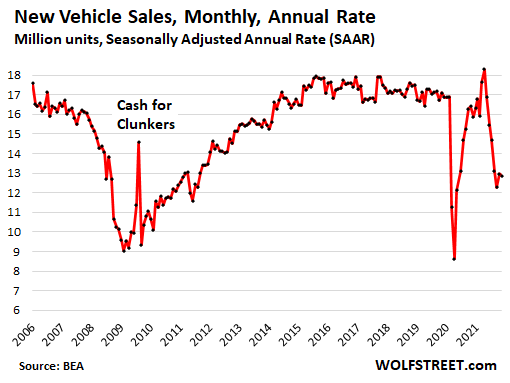 But these shortages are dynamic and change.

GM and Ford got hit hard and heavy by the semiconductor shortages early this year, but are now getting some supply, and production is recovering, even as Toyota is getting crushed.

Used vehicle inventories not so tight, but prices are ridiculous.

Unlike new vehicles, there is no shortage of used vehicles, except at the very low end. But supply is tight. Total used vehicle inventory on dealer lots ticked up by 2.7% in November from October, to 2.31 million vehicles, down 11% from November 2020, according to Cox Automotive today.

Supply at the end of November was 44 days – getting back into the normal-ish range – but this was down by 15% from November 2020, as sales this November increased by 5% year-over-year. 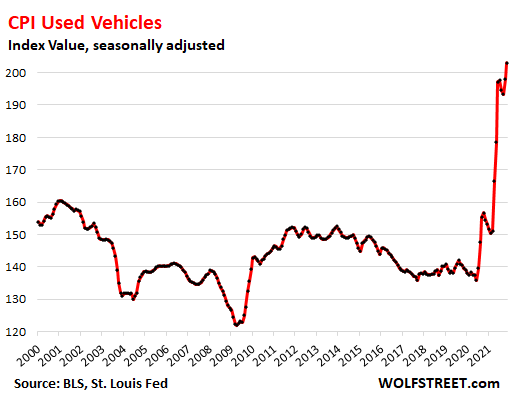 As everyone is pumping up prices, there is little left on dealer lots below $15,000. But there’s plenty of supply at higher prices. And so far, amazingly, Americans have been willing, or even eager, to pay these ridiculous prices, instead of driving for a year or two what they already have:

139 comments for “Inventory & Supply of New & Used Vehicles in Dollars & Units: What a Mess”