The Fed continues to add Treasury securities and Mortgage-Backed Securities to its holdings for the time being, despite raging inflation, but said it will reduce these purchases in increments, likely starting in November and end adding to its holdings by mid-2022. It has already largely unwound its crisis specials, ranging from repos and liquidity swaps to that alphabet soup of programs, such as its holdings of corporate bonds, bond ETFs, and commercial paper, which it sold in recent months into one of the hottest bond markets ever.

In total, the assets on the Fed’s weekly balance sheet through Wednesday October 27, released today, ticked down from the record last week, to $8.56 trillion, having ballooned by $4.2 trillion since March 11, 2020, when this whole money-printing insanity started.

It has been a mind-boggling amount of QE designed to repress long-term Treasury yields, mortgage rates, and long-term interest rates of any kind, and to inflate asset prices, and to thereby create the biggest wealth disparity ever via the Fed’s Wealth Effect doctrine. As a result, nearly all corporate bond and loan yields, except for the highest-risk junk-rated instruments, are below the rate of inflation, which has taken off early this year at a blistering pace and by various measures has hit multi-decade highs. 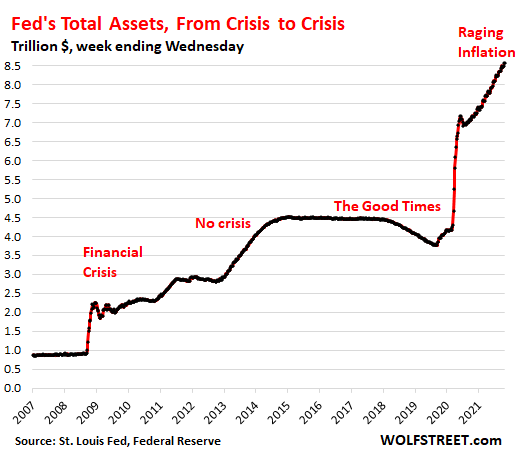 Since the beginning of March 2020, the Fed’s holdings of Treasury securities have ballooned by $3.0 trillion, to $5.5 trillion.

This includes $436 billion of TIPS (Treasury Inflation-Protected Securities, face value and inflation protection). By dominating the TIPS market, and thereby manipulating TIPS prices and yields, the Fed has assured that market-based inflation indicators, such as the 10-year Breakeven Inflation Rate, reflect only the Fed’s purchases and expected future purchases, and not any expectations about inflation.

Inflation expectation indicators that are based on the bond market have become so manipulated by the Fed’s bond and TIPS purchases that they’re useless. 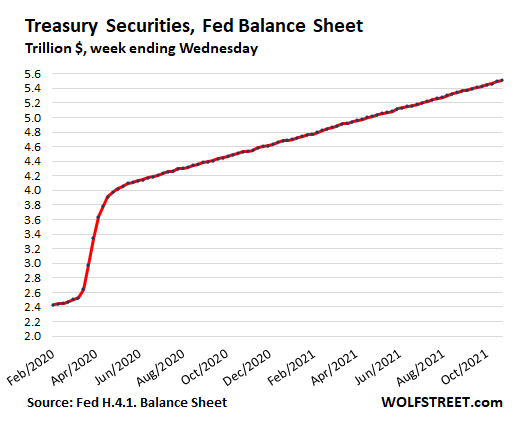 The Fed’s holdings of mortgage-backed securities reached $2.53 trillion, up by $1.16 trillion since March 2020. 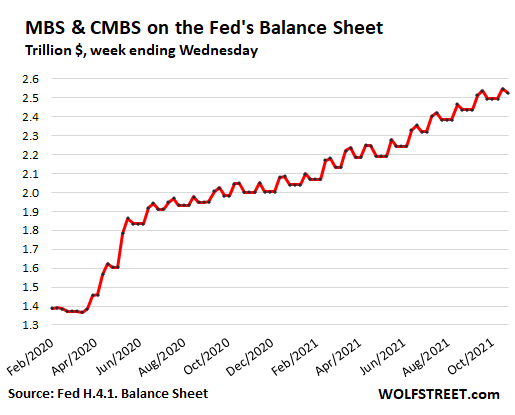 The Fed is still offering repos but has raised the rates to where there are better deals out there, and no one has been taking up the Fed’s offers since July last year, when the balance fell to zero.

With these repos, an asset for the Fed, it hands out cash in return for securities, a quick way to send lots of liquidity to the markets.

Repos are the opposite of the currently hot overnight Reverse Repos (RRP), a liability on the balance sheet, with which the Fed drains cash from the market, currently amounting to $1.38 trillion. Under pressure from excess liquidity that QE has created, the Fed is using RRPs to keep short-term yields above 0%.

Repos are in-and-out transactions. On their maturity date – the next business day for overnight repos – the agreement unwinds, the Fed gets its cash back, and the counterparty gets its security back. 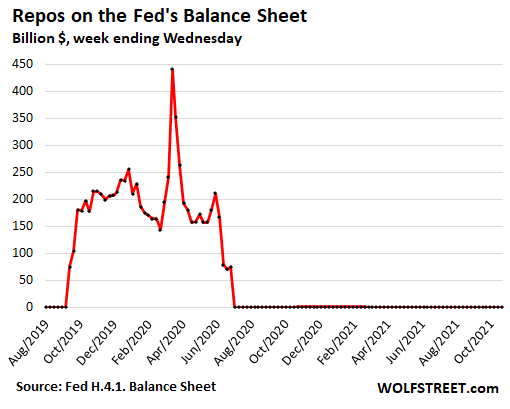 Central-bank liquidity-swaps at near zero.

Almost all of those swaps have matured and were unwound, with the Fed getting its dollars back, and the other central banks getting the local currency back. Only minuscule amounts of swaps ($323 million) remain outstanding: 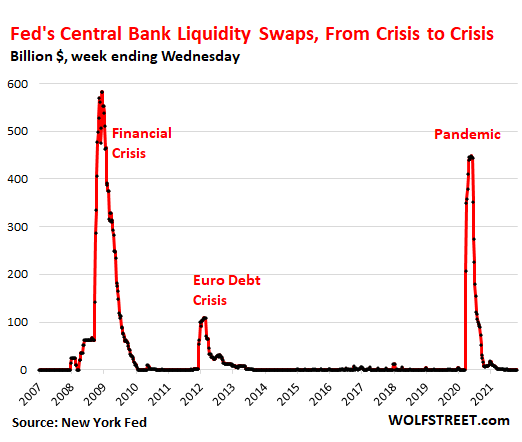 Special Purpose Vehicles (SPVs) are legal entities (LLCs) that the Fed set up during the crisis to buy assets that it was not allowed to buy otherwise. Equity funding was provided by the Treasury Department, which would take the first loss on those assets. The Fed lends to the SPVs, and shows these loans and the equity funding from the Treasury Dept. in these SPV accounts.

Total amounts of the SPVs combined dropped to $79 billion, from a peak of $208 billion in July 2020. Of that $79 billion, PPP loans that the Fed bought from the banks account for $50 billion. The remainder are the Main Street Lending Program ($13 billion), Municipal Liquidity Facility ($10 billion), and TALF ($4 billion): 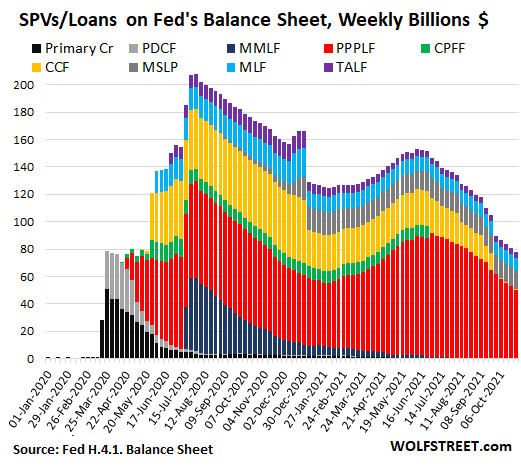 So, all those crisis specials have either already been unwound completely or are being unwound. What’s left are Treasury securities and MBS, the two biggies. And the Fed will likely reduce purchases starting in November.