But still up 4.9% from a year ago – outside of the prior quarter, the hottest year-over-year growth in 20 years.

The US economy, as measured by GDP, adjusted for inflation, grew by an annualized rate of 2.0% in Q3 from Q2. This is far below the pandemic growth rates of the past four quarters. But hey, those were special. In the decade from 2010 through 2019, annual GDP growth averaged 2.3% and never reached 3% in any single year. So 2.0% is in that normal range for the US economy.

But Q3 wasn’t normal. It was marred by rampant inflation, labor shortages, and supply chain chaos that led to a continued drop in inventories (a negative for GDP) and caused manufacturers, industrial companies, and retailers – particularly in the huge auto industry – to run out of product for consumers to buy. And it was further marred by a huge record massive blistering trade deficit, which is a negative for GDP. 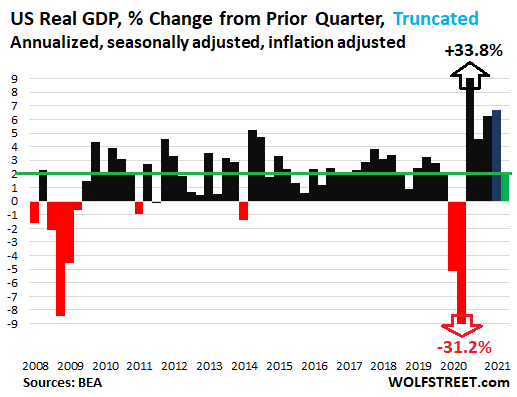 Real GDP, expressed in “chained 2012 dollars,” in Q3 rose to a new record of a “seasonally adjusted annual rate” of $19.5 trillion: 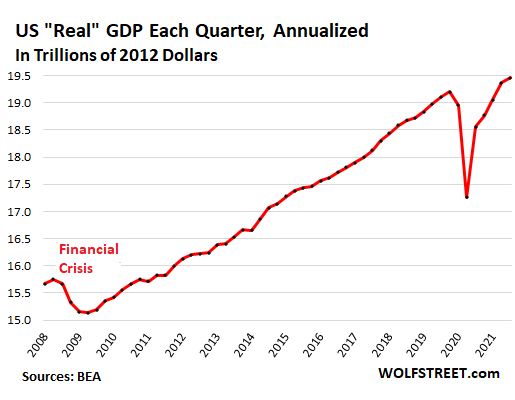 The broad Price Index for Gross Domestic Purchases, the BEA’s inflation measure that roughly parallels its inflation adjustments to GDP, rose by an annualized rate of 5.4% in Q3, down from an increase of 5.8% in the prior quarter. Both were the highest since 1982. 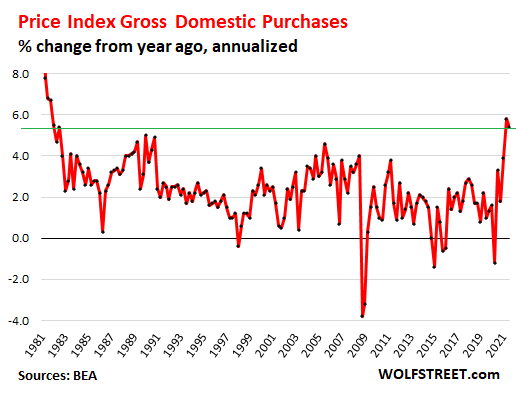 Consumers had trouble outspending the rampant price increases. And with some products, such as new vehicles, they had trouble finding something to buy, as inventories had been depleted. Inventories at auto dealers collapsed, and new vehicle sales plunged.

Consumer spending accounted for 70.5% of total GDP, the second time ever that it was above 70%, Q2 having been the first time. This shows to what extent stimulus has powered consumer spending. 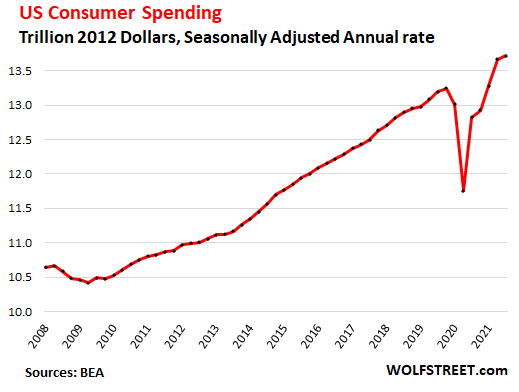 The Trade Deficit in goods and services, oh my, fueled by imports, which are fueled by consumer spending on imported goods, sharply worsened to a new worst. Exports add to GDP, imports lower GDP. The balance (exports minus imports), or “net exports,” worsened by $67 billion, or by 5.4%, to a record worst of -$1.31 trillion annual rate (in 2012 dollars). This 50-year chart is an indictment of globalization over the past three decades by Corporate America: 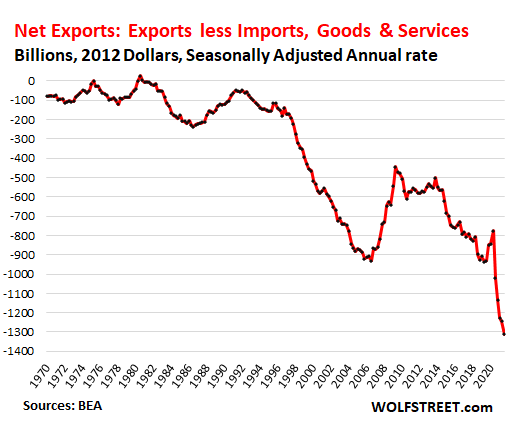 Gross private domestic investment rose by 2.8%, after two quarters of declines, to a seasonally adjusted annual rate of $3.6 trillion. This category includes the major sub-categories “change in private inventories” and “fixed private investment.”

Inventories continued to drop amid widespread shortages of materials, components, and finished products across the economy, but most catastrophically in the auto industry, which has been waylaid by the semiconductor shortages, and inventories of new vehicles at auto dealers have collapsed. Auto dealer inventories normally account for over one-third of total retailer inventories, and they move the needle, but many other retailers too where in short supply. 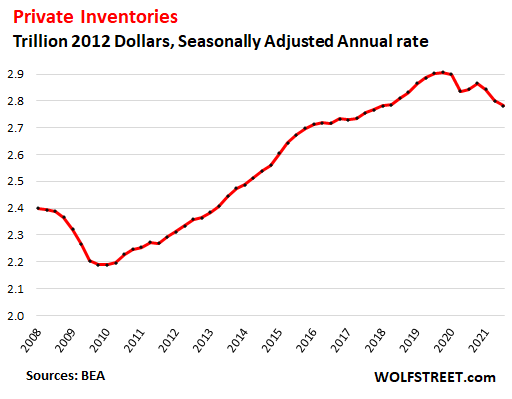 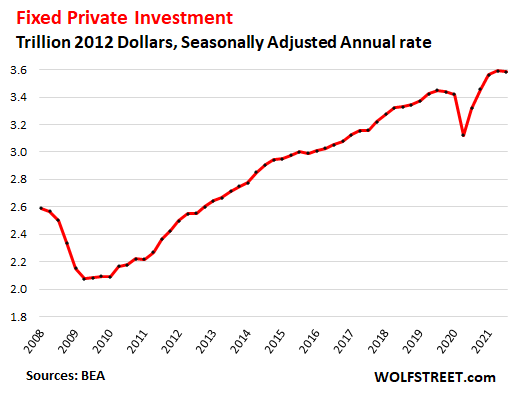 Government consumption and investment ticked up, after the drop in Q2, to an annual rate of $3.38 trillion. Despite the ups and downs, it has remained roughly in the same range since in Q1 2020.

Note: This does not include transfer payments to consumers and companies, such as stimulus payments, unemployment payments, Social Security payments, and it does not include government salaries, and other direct payments to consumers. Those payments enter GDP when consumers spend this money as part of consumer spending. And funds that businesses received enter GDP when businesses spend or invest the money.

Government consumption and investment includes only what governments at all levels spend on goods and services, such as fuel, supplies, furniture, office rents, consulting services, cloud contracts, software, IT services, etc., and investments, such as in equipment and infrastructure. 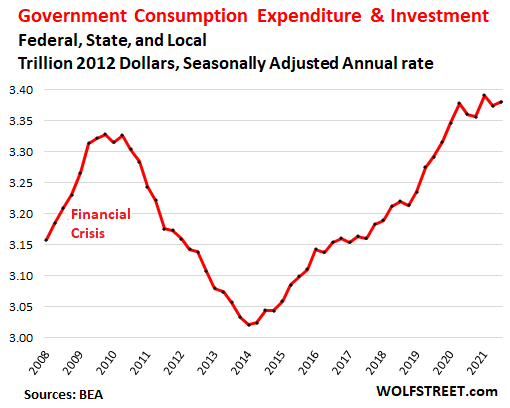